Update Friday, Feb 5: Shares in Alibaba remained supported in early pre-market trading on Friday. BABA announced it has raised $5 billion via a long-term bond issuance. Alibaba says the funds are to be used for general corporate purposes, working capital, and repayment of offshore debt. Shares in BABA have climbed steadily in 2021 as Jack Ma reappeared in public and Ant Group reaches a deal with Chinese regulators.

Update: Alibaba (BABA) rose on Monday as Alibaba was named on Citi’s list of top Chinese tech stocks for 2021. Citi said it liked BABA “because the valuation is attractive”. BABA was also boosted by overall positive sentiment in the Chinese market with China becoming the top country in the world for FDI. Bernstein also started coverage of Alibaba (BABA) with a market-perform rating for the stock.

Alibaba (BABA) is the Chinese Amazon but has been in the news for all the wrong reasons of late. Just in case you are back from a trip to Mars, here is a brief recap of this ongoing saga.

BABA is one of China’s most successful internet companies, has a similar business model to Amazon with an online retail marketplace, a cloud business and a fintech e-payments business called ANT Group. ANT Group was due to be offered in late 2020 but was pulled at the last minute after BABA and ANT founder Jack Ma gave a speech in which he criticised Chinese regulators and banking industry. The IPO (Initial Public Offering) was cancelled and BABA share price has cratered since, losing over 30% from its highs.

BABA has been one of the most talked-about stocks over the last few weeks on internet chat boards and among the institutional and hedge fund communities as all market players try to get a grip on what is happening. Jack Ma has not made any statements since that infamous October criticism, BABA is still under investigation from Chinese regulators and the US administration has been delisting certain Chinese stocks. All of this has helped fuel investor uncertainty and the market always hates uncertainty. The stock understandably has fallen.

The Chinese government has too much to lose by breaking up BABA or letting it fail. The Chinese Communist Party (CCP) has in recent years embraced capitalism on its own terms and opened up the country to foreign investors. A look at the investor profile of BABA shows a multitude of large institutional investors such as Softbank, Blackrock, Vanguard, T Rowe Price, State Street, JP Morgan, Schroeder's, etc. These are huge global investors holding a huge share of the global equity market. Blackrock is the largest fund manager in the world and has a shareholding in every global publicly-listed company.

To isolate the global investment community would be a hugely negative action for China with huge repercussions for its economy, it is not going to happen. China is currently the second-largest economy in the world with its target set to take the number one spot in the next few years. The CCP wants to maintain this economic powerhouse story, but on its own terms.  It cannot afford to isolate the global investment community.

Alibaba recently announced second-quarter results for the year with 30% revenue growth, cash flow up 15% and BABA cloud business previously mentioned for IBM has increased its revenue by 60%. BABA expects near 40% growth in earnings for FY2021 and EPS (Earnings per Share) estimate for 2022 was increased from $11.68 to $12.45. BABA, like Amazon (AMZN), is well-diversified across multiple sectors and the US-China political backdrop should improve with President Biden.

The company is comparable to Amazon but trades at a marked discount now. Its P/E (Price-to-Earnings ratio) is 23 versus an industry average of near 50 and Amazon P/E of 95. Analysts are still positive on the stock with an average $328 price target. 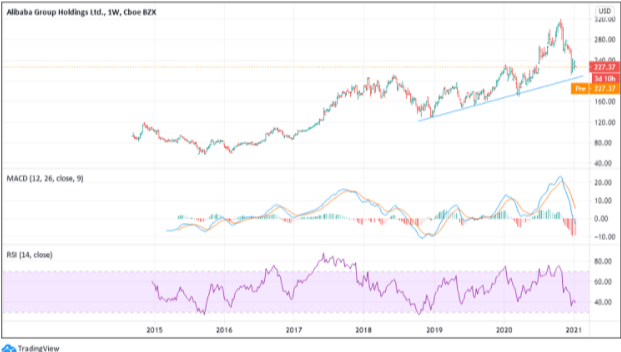 The author has no position in any stock mentioned in this article and no business relationship with any company mentioned. The author has received compensation for writing this article. The author and FXStreet are not registered investment advisors and nothing in this article is intended to be investment advice. It is important to do your own research before making any investment and take independent advice from a registered investment advisor. This article is for information purposes only. We/I do not provide personalized recommendations. I make no representations as to accuracy, completeness, the suitability of this information. I will not be liable for any errors, omissions or any losses, injuries or damages arising from this information display or use. I will not be held responsible for information that is found at the end of links posted on this page.