New developments around the Zilliqa blockchain are gaining traction and could positively affect ZIL price in the short term.

Third-largest tokenized currency is based on Zilliqa

More than two years after the initial discussion between Zilliqa and Xfers, tokenized Singapore dollar (XSGD), built on the Zilliqa blockchain, is now the third-largest tokenized currency after the US dollar and the euro.

Thanks to $XSGD by @xfers, Singaporean Dollar is now the third largest tokenized currency in the world. #PoweredByZilliqa $ZIL pic.twitter.com/JLDnpKVSAA

This growth translates Singapore dollar’s demand into Zilliqa’s network growth, which could, in turn, provide ZIL price a nudge to surge higher.

At the time of writing, football seems to be the only available game. However, the market participants on this platform seem to be on the rise. On March 22, 14 football games were hosted on this platform, with about 8,000 ZIL tokens distributed as the prize pool.

The Juventus game on March 21 also saw about 6,000 ZIL tokens being distributed to winners. All in all, the Zilliqa blockchain seems to be gaining adoption and suggests that the market value of its native token, ZIL, will soon follow.

Zilliqa price on the verge of a massive bounce

Zilliqa price has created three higher highs and a few lower lows since late January. By drawing a trend line connecting these swing points, an ascending parallel channel has been formed.

If breached, this setup forecasts a steep correction. However, Zilliqa bulls seem to have other plans. At the time of writing, Zilliqa price is trading just above a crucial demand barrier at $0.15, coinciding with the 61.8% Fibonacci retracement level and the 12-hour 50 exponential moving average (EMA).

Since March 11, ZIL has tapped this level almost four times. If something similar happened again, Zilliqa price would be due for a bounce that could push it towards the technical formation’s upper boundary.

Supporting this optimistic scenario for ZIL is SuperTrend indicator’s “buy signal,” which has persisted despite the recent price spike to the downside. 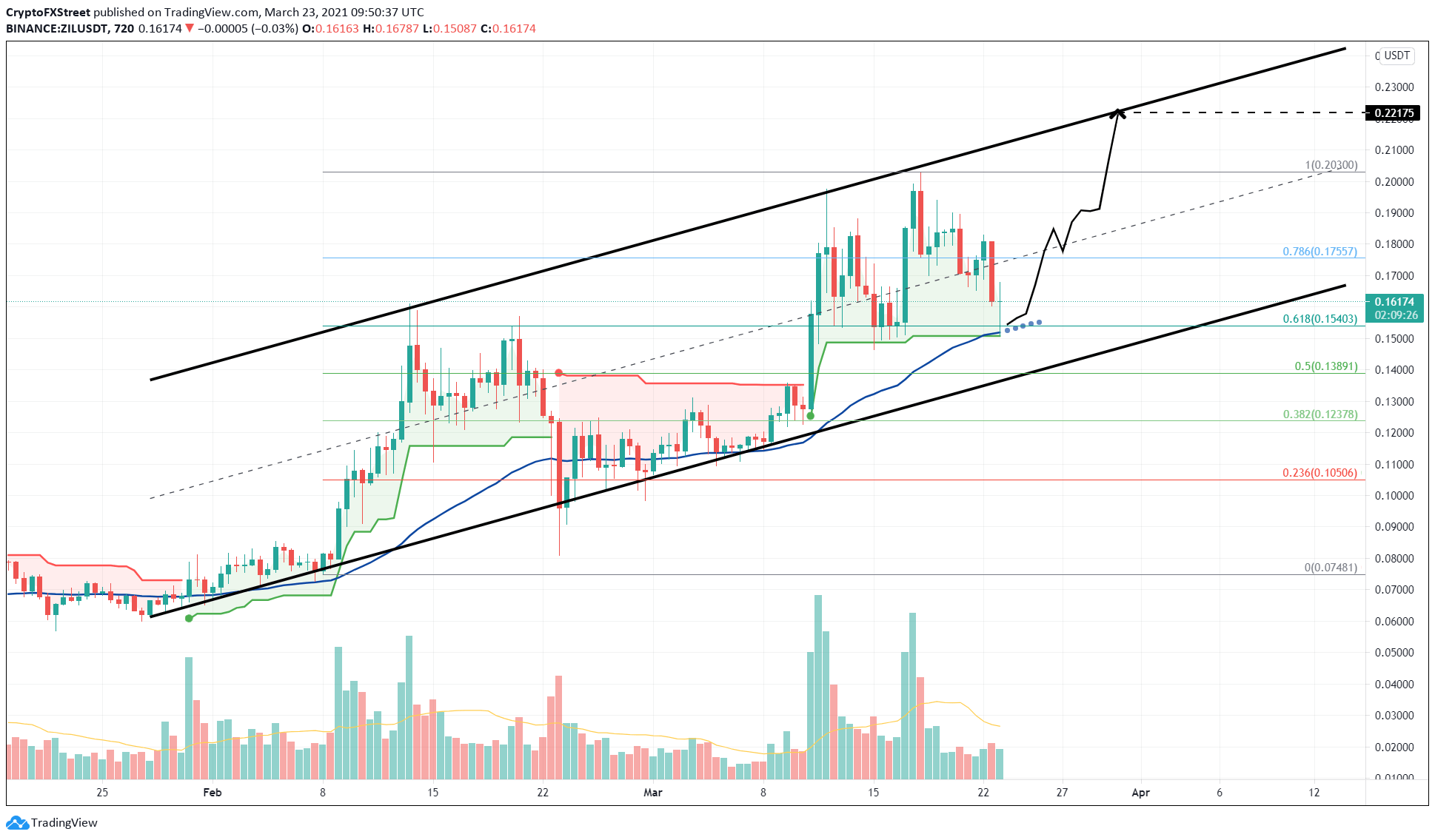 While a bounce seems likely, a logical option suggests the weakening of the support level, followed by a correction.

Therefore, Zilliqa price could experience a 10% drop to the next immediate demand barrier at $0.13, if the $0.15 level is breached.

If the bearish momentum persists, investors can expect another 10% sell-off to the 38.2% Fibonacci retracement level at $0.12.