XRP price is consolidating in a tight range near the range low but eyes a move higher. A bounce from the immediate support barrier might propel Ripple into the high probability reversal zone.

However, the SEC vs. Ripple lawsuit is one of the crucial developments that will play a pivotal role in how XRP price will react. Investors need to note that the distributed ledger firm continues to flourish in the East despite the allegations and is still unlocking $1 billion XRP every month.

Likewise, former Ripple CTO Jed McCaleb is releasing tokens from his wallets as per the set terms.

Ripple took a gut punch as the former chairman of the Securities & Exchange Commission (SEC), Jay Clayton, gave the greenlight to the SEC’s securities fraud lawsuit against it on December 22, 2020. The fight between the two has been ongoing since then.

To summarize, Ripple initially tried to dismiss the case by stating that they were not given fair notice. Soon after, US Magistrate Judge Sarah Netburn ordered the SEC to reveal documents that helped conclude that Bitcoin and Ether were not securities.

So far, the SEC has not provided internal or external response documents.

In late June, Ripple lawyers served the SEC with a subpoena to depose a former SEC official to testify in the ongoing lawsuit. Although it is unclear who the regulator will be, Jay Clayton is the likely candidate.

According to James Filan, an attorney familiar with the matter said that the SEC is objecting to the deposition of its official.

While there are no laws regarding cryptocurrencies, the SEC vs. Ripple case will set the precedent for future securities violations and lawsuits against cryptocurrency projects or companies.

There are two primary sources for XRP to enter the cryptocurrency market, and the major source is the escrows that Ripple created. Escrows are a conditional payment feature of the XRP Ledger (XRPL). In this case, the escrow releases a set amount of remittance tokens every month at a particular date.

In December 2017, Ripple created 55 such accounts that release 1 billion tokens on the first day of each month. The released amount can be used by Ripple, sold to exchanges or deployed as liquidity at their cross-border payment gateways and so on.

The other source for XRP to enter the market is Jed McCaleb, the co-founder and CTO of Stellar and the former CTO of Ripple. Based on on-chain data, McCaleb’s wallet ‘tacostand’ spit out a whopping 54 million XRP tokens in the past week.

On average, the former CTO sells roughly 250 million tokens a month (worth roughly 201 million in June). Including the ones from the escrow, this number adds up to approximately 350 million XRP released every month.

This steady outflow causes a positive supply shock, which could negatively affect XRP price. On the same topic, Peter Brandt, a renowned technical analyst and veteran trader, has pointed out that XRP price shows signs of manipulation.

Regardless, XRP price has shown time and again that it will defy the odds. An apt example is its recent rally, which pushed it to toward $2.

XRP price is currently trading 32% above the range low at $0.505. Ripple has been doing this for almost two weeks, indicating that it is coiling up for a big move.

Considering the bullish setup on Bitcoin price and how it is looking to rally to $40,000 or $42,451, investors can expect XRP price to follow suit.

Assuming such a thing occurs, the bulls need to slice through the immediate resistance barriers at $0.707 and $0.791. Doing so will open up the path toward the 50% Fibonacci retracement level at $0.902.

This barrier has pushed XRP price down twice over the past 50 days. Therefore, the ongoing consolidation will likely catapult the remittance token by 65% to tag $1.065 and $1.133 in a highly bullish case. 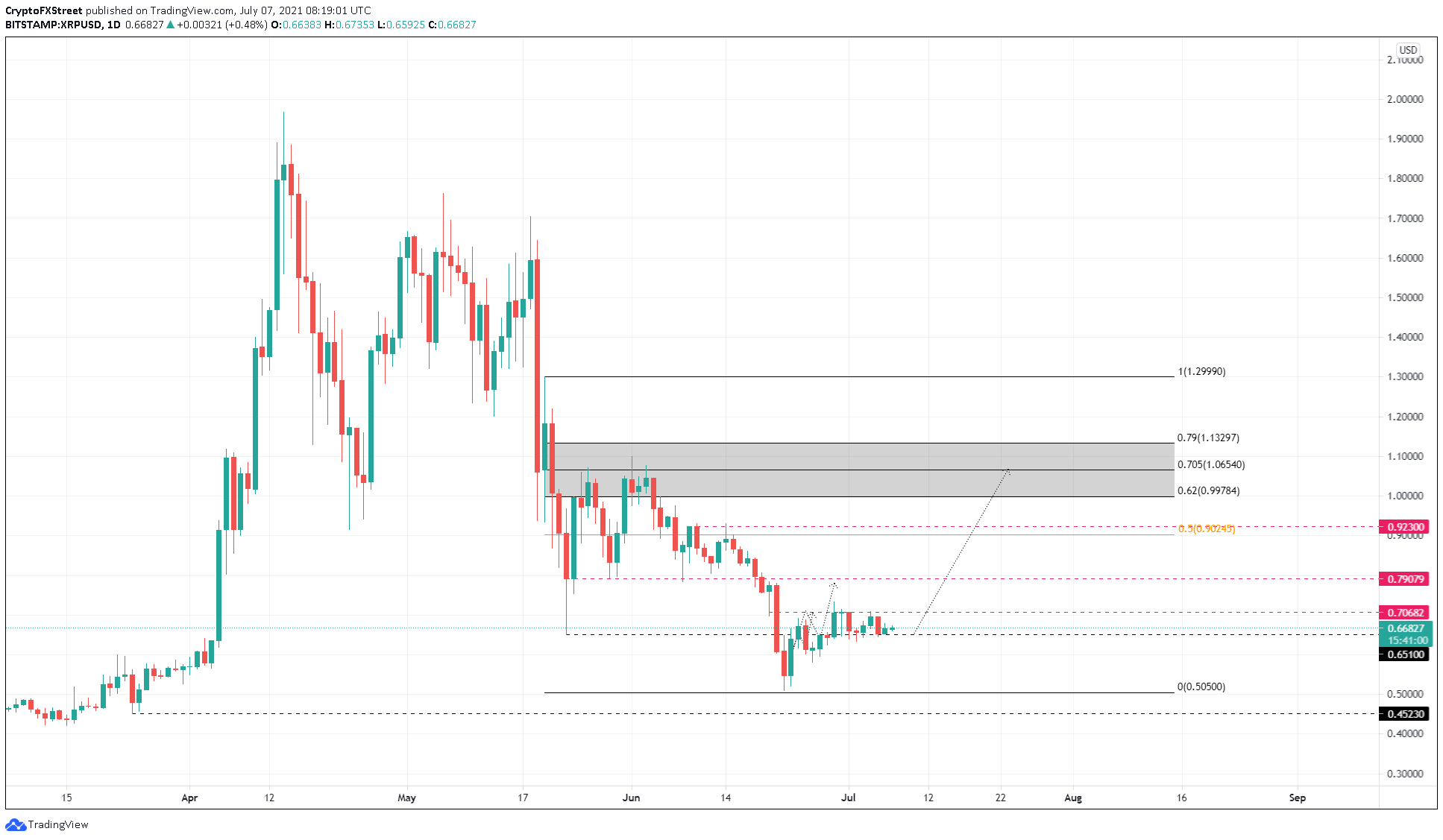 Supporting this bullish impulsive move is the 365-day Market Value to Realized Value (MVRV) model, which is currently moving above the zero-line from the opportunity zone. This fundamental index is used to measure the average profit/loss of investors who purchased XRP over the past year.

The 365-day MVRV dipped from 133% on May 18 to -11% on June 21. The downswing suggests that short-term traders booked profit. The negative value represents an opportunity for long-term investors to accumulate.

The last time Ripple’s MVRV dipped into negative territory was on February 1, when XRP price was hovering around $0.379. Roughly 12 days after this dip, the market value of the remittance token surged 67% to tag $0.62.

Therefore, if something similar were to happen, XRP price will likely tag $1.

On the other hand, if market participants continue to book profits, leading to a breakdown of the $0.65 support floor, XRP price will likely retest the range low at $0.505, which coincides with the June 2019 top.

A breakdown of $0.505 will invalidate the bullish thesis and kick-start a 12% descent to the next support barrier at $0.452.