XRP price has, since its major drop in June, consolidated in a narrow range running from $0.30 to $0.40. This slow, unresponsive price movement saw investors take a hands-off approach, making XRP price recovery a challenge. However, the cross-border token may soon break out of the range, climb to $0.50 and then move to $1.00.

The lawsuit against Ripple Labs and its top executives has not stopped the blockchain startup from spreading its wings, with the Colombian government becoming the latest on the partnership list. With Ripple Labs’ technology, Colombia hopes to transfer all land titles to the blockchain.

This development is part of a larger plan to rectify land distribution efforts that have for a long time triggered conflicts. According to the official government announcement, the project will build on technologies from Ripple and Peersyst.

“Land is everything in Colombia. This led to armed groups like the FARC starting a war with the government,” Peersyst Technology CEO Ferran Prat reckoned while speaking to Decrypt.

XRP price is likely to benefit immensely from such partnerships because they reassure investors that Ripple Labs is a company focused on expansion and growth. Besides, the persistent push for the adoption of Ripple-based technologies redirects attention from the lawsuit that has been dragging since December 2020.

XRP price closes in on a make-or-break moment

The international money remittance token is doddering at $0.37 at the time of writing. Immediate support is being provided by the Bollinger bands’ through line on the daily chart. Based on an analysis of the Relative Strength Index (RSI), XRP could close the day above a confluence formed by the 100-day Simple Moving Average (SMA) and the upper boundary of the Bollinger bands. 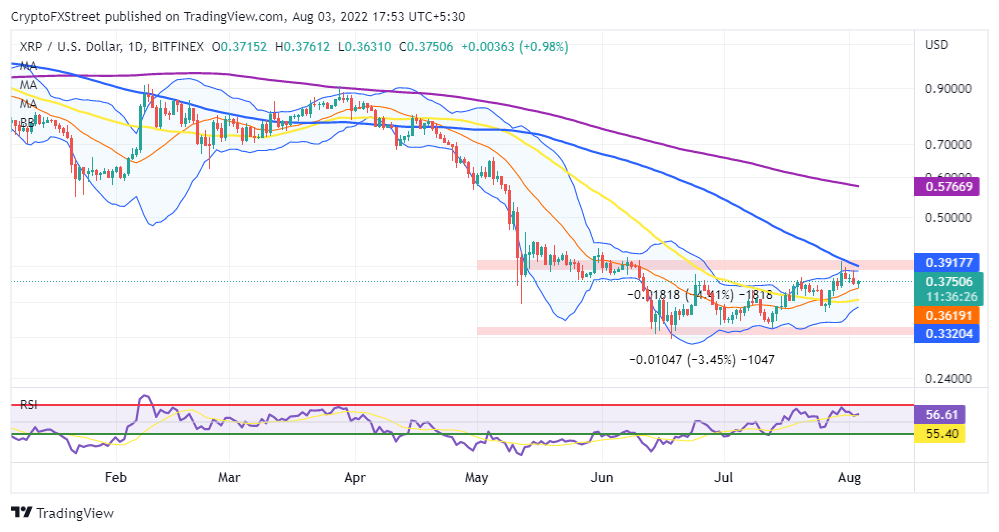 XRP price’s bullish formation stems from the Bollinger bands, which are expected to squeeze further in the coming days. Although a break is usually expected in either direction, solid support at $0.33 and the RSI’s bullish divergence will guide movement to the upside.

Conversely, a report from Bitstamp exchange says that the exchange will delist at least 14 trading pairs on August 11, including XRP/PAX. The motive behind this delisting exercise has not been revealed at the time of writing. However, the move might negatively impact XRP price performance, especially with its long-standing exposure to the bear market.