Bitcoin price has plunged 10% since November 15 as the leading cryptocurrency’s momentum shifted to the downside. Although BTC is confronted by several technical obstacles, it appears that the flagship digital asset has secured reliable support to prevent further losses.

Bitcoin price is now stuck in a tight range after the bulls failed to lift prices higher against the overpowering distribution of the sellers. The bellwether cryptocurrency fell sharply from its all-time high, penetrating below the psychological support level at $60,000.

However, analysts continue to remain bullish on Bitcoin price as blockchain data suggests that the recent correction may be short-lived. The recent plunge in cryptocurrency prices seemed to have been related to excessive leverage being “flushed out,” according to Jan Wuestenfeld, an analyst at CryptoQuant.

Wuestenfeld added that as long as on-chain fundamentals remain unchanged, the medium-term outlook for Bitcoin price continues to be bullish.

Joo Kian, analyst at Delphi Digital holds a similar view, stating that leveraged traders were victims of liquidations as prices declined. He added that open interest was at peak levels for most trading pairs before Bitcoin price plunged. Kian further highlighted that flushing out excessive leverage is healthy for markets over the longer term. However, he warned that it may take some time before trading activity recovers.

In addition, the Bitcoin 30-day MVRV, which shows the unrealized profit/loss of all the addresses that have acquired BTC in the past 30 days, suggests that the leading cryptocurrency is undervalued and may see a recovery.

Bitcoin price could retest $58,000 before a bullish bounce

Bitcoin price is testing the reliability of multiple support levels before the bulls plan a comeback. The leading digital asset will discover an immediate foothold at the October 23 low, at $59,595, before dropping toward the 100 twelve-hour Simple Moving Average (SMA) at $59,130.

The governing parallel channel pattern on the 12-hour chart suggests that Bitcoin price could be trapped in consolidation in the near term. However, additional selling pressure could see BTC fall toward the lower boundary of the technical pattern at $58,435. Failure to hold the aforementioned support would see the flagship cryptocurrency plunge to the October 28 low at $57,807. 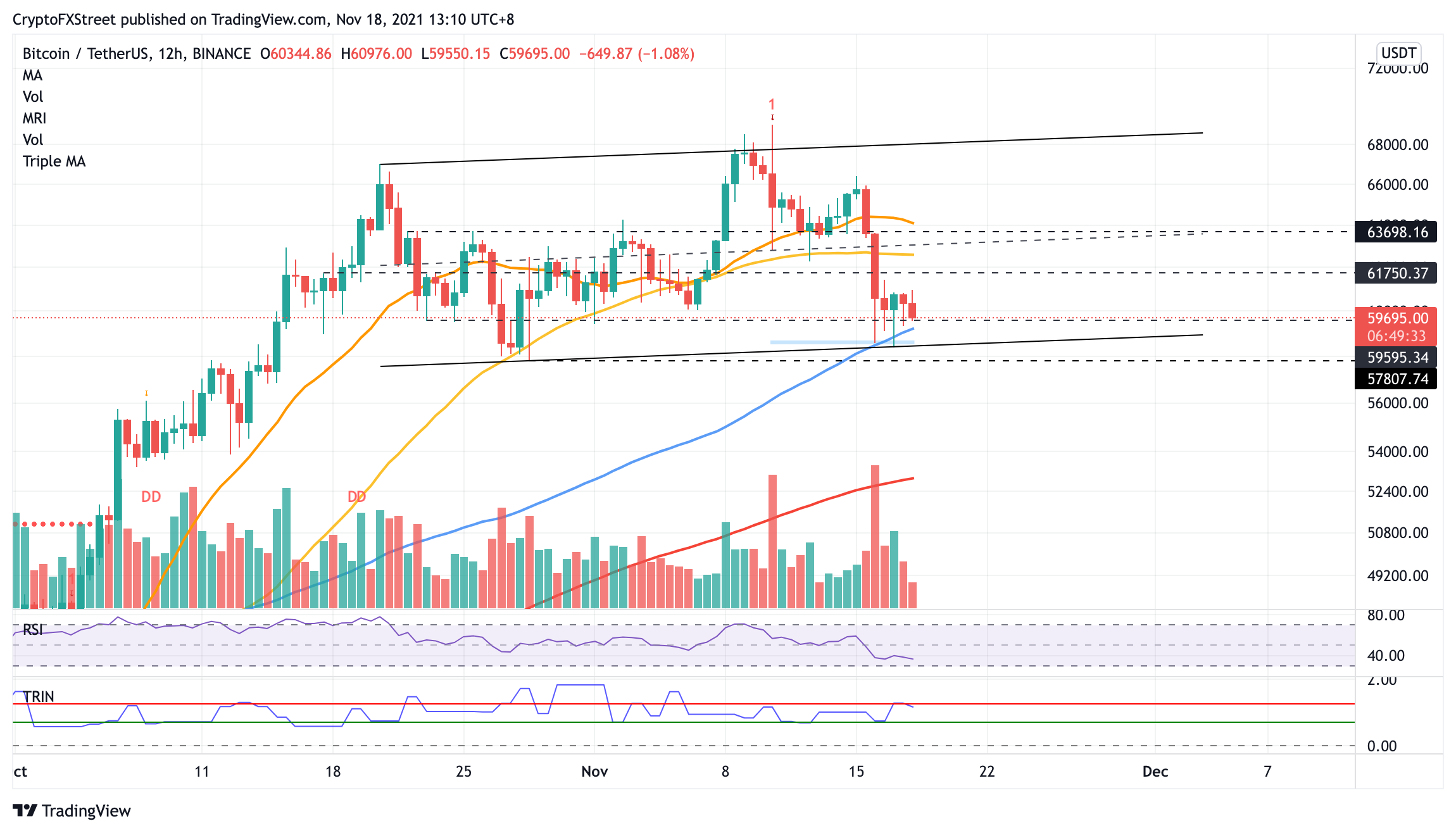 If Bitcoin price manages to hold above the lower trend line of the parallel channel, BTC could see a shift in momentum to the upside. However, the leading cryptocurrency could be confronted with multiple obstacles before reaching the optimistic target at the upper boundary of the technical pattern.