Positive news around the launch of Fidelity’s custody solutions in March and the resubmission of VanEck’s ETF application have not materially affected the market. Digital assets were trading within a tight 5% range last week, with total market cap lows and highs at $111bn and $116.5bn respectively. Overall volume is down by more than 30%, from the week’s high of $22bn, currently at the $15bn mark. Bitcoin has found support at $3,400 after a small plunge atthe beginning of last week with a quick recovery back to a ~$3,460 range. Bitcoin saw some activity towards the end of the week, with an attempted breakout stopped at $3,550 but is now back at $3,450 at the time of writing. Similarly Ethereum, trading in a 5% range, has found support at $104 and resistance at $110 and is down by 1.5% compared to last Monday. The second largest digital asset Ripple had spiked by almost 15% on Wednesday, however the bullish momentum only lasted a couple of hours and XRP is now back above the $0.3 mark, 3% higher since last Monday. Fourth and fifth largest assets EOS and Bitcoin Cash are both up by 5%.

Figure 1. The performance and market capitalisation of top-30 cryptocurrencies (by MktCap) 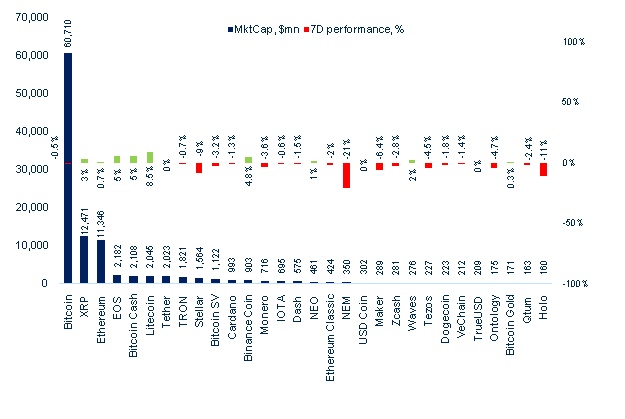 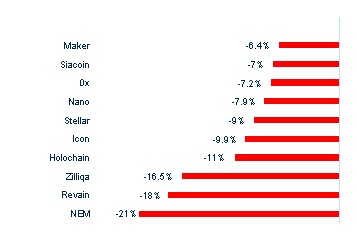 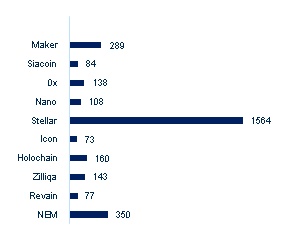 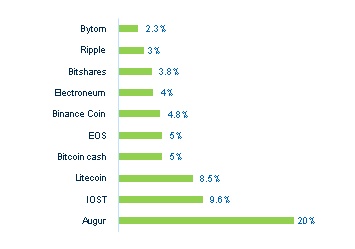 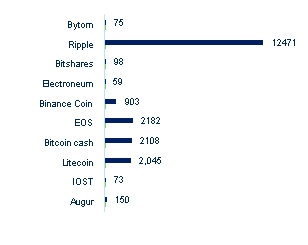 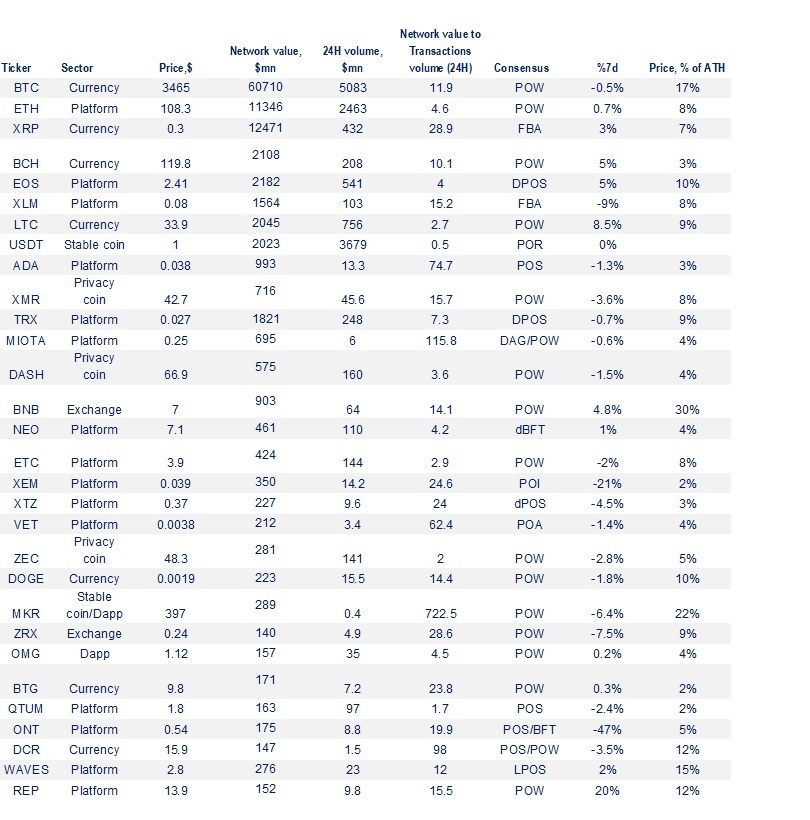 Blockchain protocol Polkadot is raising an additional $60m at a fully-diluted token supply valuation of $1.2bn via a second token sale. The project, which aims to solve an interoperability problem, raised $145m in October 2017, of which $98m has been frozen in its wallet due to a bug.

The four largest South Korean-based crypto exchanges Bithumb, Upbit, Corbit and Coinone, have set up a hotline to tackle money laundering and other suspicious activities, in order to protect customers.

Intercontinental Exchange (ICE), the operator of NYSE and anticipated crypto exchange Bakkt has partnered with blockchain data firm Blockstream to launch a cryptocurrency data feed, which will enable the traders to see real time and historical data, price discovery and other in-depth information about the market.

Fidelity Investment is aiming to launch its Bitcoin custody services in March. Fidelity’s solution, designed for big institutional players is “currently serving a select set of eligible clients” only.

Binance, the largest cryptocurrency exchange by volume, now allows its customers to buy crypto via credit cards and effectively has become the biggest competitor of Coinbase, which already has a fiat on-ramp.

Singapore-based blockchain protocol startup NEM will be laying off staff, cutting budgets and restructuring its business in order to avoid bankruptcy. The 18th largest cryptocurrency by market cap has requested a funding of ~$7.5m from the community.

VanEck has resubmitted its proposal for the VanEck/SolidX Bitcoin ETF with the SEC after the initial proposal was withdrawn earlier in January due to a government shutdown.

More Than 60% of Crypto Hacks Caused by Only Two Groups

According to Chainanalysis, of $1.7bn worth of crypto hacks, more than $1bn has been orchestrated by only two groups of highly sophisticated cyber criminals.

Ukrainian exchange Liqui is shutting down its services due to a lack of liquidity, while Canadian exchanges QuadricaCX owes its customers $190m after its founder died, and the team isunable to access most of the funds.

The US-based security token trading venueis live from Thursday, matching first orders for its tZERO tokens. The first trade saw 10 tokens bought at $8, which is two dollars less than the STO price (not considering pre-sale). The platform, for now, only operates during normal market hours between 9:30 - 16:00 EST.

Nasdaq-listed, immuno-oncology company Agenus, announced the launch of its $100m Biotech Electronic Security Token (BEST) offering, the first security token in the healthcare industry. Agenus has introduced a structure, which allows for targeted investment of a specific product, while preserving shareholder equity.

South Korea’s Financial Services Commission (FSC) has decided not to lift its domestic ICO ban after the FSC has conducted a survey, which indicates that companies were circumventing the ban by setting up paper companies in Singapore, while still raising money in Korea.

The Senate of Wyoming has passed a law which effectively recognize cryptocurrencies under the same regulations and attributions as fiat money. Digital assets are further classified into three categories: digital consumer assets, digital securities and virtual currency. Additionally the Senate is introducing a new set of rules which allow banks to provide custody services.

Yesterday, Ether made a strong impact and shot its dominance level up 10%, easily surpassing the SMA200 and registering one of the most significant upward movements in one day since records began.

XRP/USD is changing hands marginally above $0.2000 with over 10% of gains since this time on Monday. The third-largest digital asset with the current market value of $9 billion

ETH/USD jumped above $176.00 during early Asian hours as the bullish momentum increased after the coin broke above the psychological $150.00.

Most part of the week Bitcoin has been on the recovery path. Slowly but surely the coin left $6,500 behind and even tested waters above $7,000.