Vechain price is in preparation for an 80% gain from the current price as VET pursues the measured move target of a multi-year cup-with-handle base at $0.377.

History repeats itself, and it is valuable to learn to use historical precedents in investing or trading. One of the precedent patterns, made famous by William J. O’Neil, is the cup-with-handle pattern. It can develop as a primary base, as in the case of VET, but more frequently as a continuation pattern following a definite price uptrend.

In most cases, the bottom part of the cup is rounded, allowing the stock time to complete a necessary correction, with a couple of shakeouts along the lows of the cup. The cup area is critical because it liquidates the weak holders and shifts the attention of speculators away from the financial instrument. With weak holders gone, there is a solid foundation to build the right side of the base, and finally, the handle.

For 18 months, from July 2018 to January 2021, VeChain price sketched out a cup-with-handle base that yielded a tremendous gain of 1,100% from the breakout of the handle at the beginning of January. The rally included the historic 7-week gain of 539% from the beginning of March until April 17. And, the advance culminated with the largest weekly gain since VET began trading, at 82%.

A gain of 1,100% merits some time to consolidate and release the accumulated price compression. VeChain price has spent the last three weeks consolidating the historic gain of 2021 with three consecutive inside weeks, just above the long-standing ascending channel that began in December 2020.

Since April 26, the consolidation has been occurring along the 61.8% Fibonacci retracement of the April decline at $0.209 and above the ascending channel. The initial objective is to release from the tightening consolidation with a volume thrust, followed by a probe of the all-time high at $0.282. A successful breakout for VeChain price will test resistance at the 361.8% extension of the August-November correction in 2020 at $0.309, representing a 50% gain from the price at the time of writing.

The aggressive objective for Vechain price is to overtake the cup-with-handle measured move target at $0.377, presenting a 86% gain from the price at the time of writing. 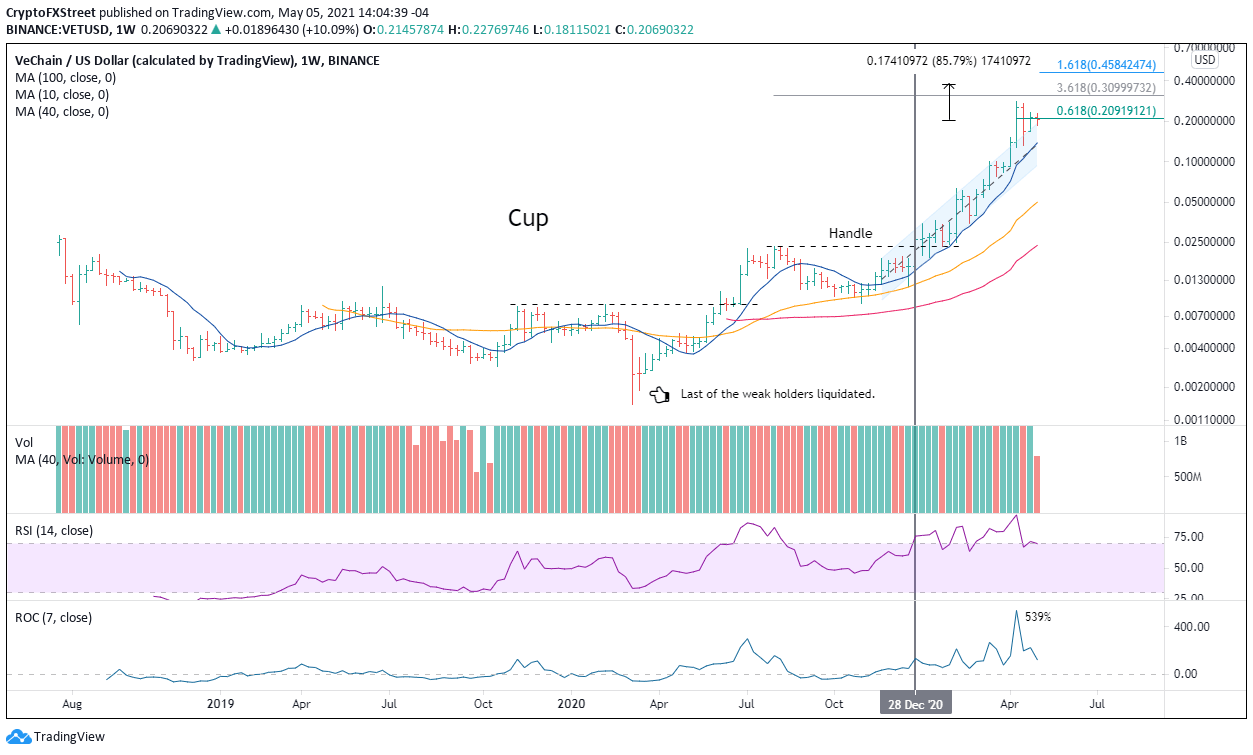 For the bullish thesis to be invalidated, VeChain price will need to close below the April low of $0.128. Before that can happen, VET will have to wrestle with solid support framed by the 10-week simple moving average (SMA) at $0.138 and the channel mid-line at $0.129.