The VeChain Foundation recently launched the start of its voting process to allow its community members to choose to implement or reject a major upgrade on its network. The upgrade, Proof-of-Authority (PoA) 2.0, would bring in a new wave of blockchain “mass adoption.”

The PoA 2.0 upgrade will eliminate the tradeoffs of the Nakamoto Consensus and Byzantine Fault Tolerance (BFT) consensus on digital assets, including bellwether cryptocurrency Bitcoin.

If the community chooses to approve the upgrade, the VeChainThor blockchain will be able to see an advantage in higher throughput capability and guaranteed data finality, which could attract more companies to use its network. High-volume use cases on the blockchain would also be possible without compromising on security.

The VeChain Foundation stated that the upgrade will allow the blockchain to witness mass adoption, and the network would also become one of the first “combined consensus mechanisms.”

Voting for the process started on October 11 and will end on October 18. The authority masternodes and Economic x nodes will have a voting weight of 40% each, while the Economic nodes would be able to obtain a 20% voting authority.

However, VeChain price has underwhelmed investors, as VET has recently dropped to a lower low at $0.104.

VeChain price at risk of 10% correction

VeChain price has sliced below the lower boundary of the parallel channel that formed since October 2, putting a bearish target of a 10% drop on the radar.

The downside trend line acted as support for VET at $0.107. However, on October 12, VeChain price fell below the line of defense as well as the 50% Fibonacci retracement level at $0.105, hinting at further weakness seen in the market.

The foothold for VeChain price would appear at $0.103, where the 50 twelve-hour and 200 twelve-hour Simple Moving Averages (SMAs) meet. Investors should note that this could be a reactionary drop due to the emergence of the Death Cross on the 12-hour chart. 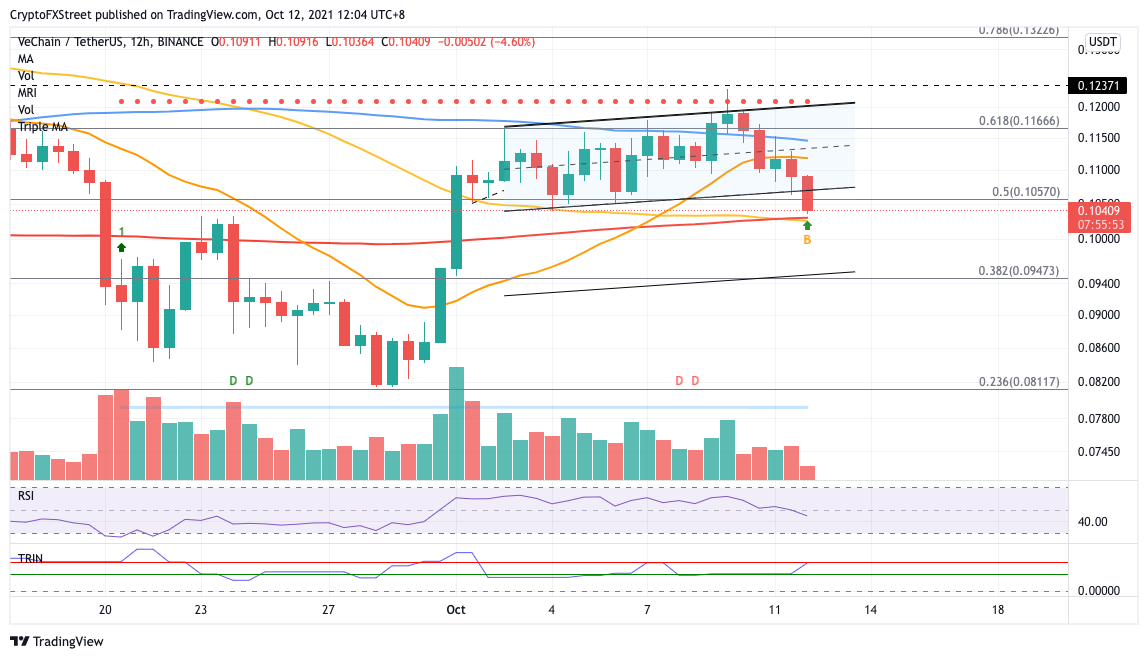 Further selling pressure could see VeChain price fall further to test the support of the September 23 high at $0.097 before eventually descending toward the pessimistic target of the chart pattern at $0.094, coinciding with the 38.2% Fibonacci retracement level.