It dawns in Europe with red as the dominant color on the Crypto board.

Today's excuse is the activity detected in a sleeping wallet that was activated in August and that, with an estimated value of $850 Million, would be making transfers to Binance and other exchanges of more than $100 million. If this is the reason for the decline, the day that the whales, the great ones, release what they carry, this market is going to fall in one go. Let's hope none of them need cash.

As we discussed in yesterday’s technical analysis, an expected day of falls do not change anything more than the mood of traders. It is possible that doubts have appeared in many minds and triggered impulsive operations. That's what it's all about. The market, all the markets, where masses with different thoughts converge, generate this kind of doubting movements that serve to clear the board of doubting hands.

If no trader had doubts and ended up reacting to them, the market would only react at key levels, sleeping the rest of the time. But that is not the case. The average trader is greatly influenced by intermediate movements and makes decisions without any technical basis that prevent him or her from executing a statistically correct trading plan. The professional trader knows how to profit from it and plays against it.

The technical highlights of the day are given in the ETH/BTC. On Sunday, the pair reached the bearish trend line that has governed the movement since July 17. And it turned down yesterday opening a possible continuation of the Ethereum's depreciation against Bitcoin.

The monthly chart remains strongly bearish for the Ether. On the daily chart, the momentum is bullish, with a technical target at the price level of 0.045 ETH/BTC. It is now at the 0.031 level, so the Ether's appreciation potential against Bitcoin is around 40%.

The BTC/USD is currently trading at the $6,266 price level after leaving yesterday's low of just $6,206 in price congestion support.

Below the current price, the first support at the $6,206 price level (yesterday's low and price congestion support). If this level is forcefully lost, we will note a change to the scenario to one of bearish continuity. The alarm level is $6,114 (month lows) and the confirmation level is $5,890 (August lows). 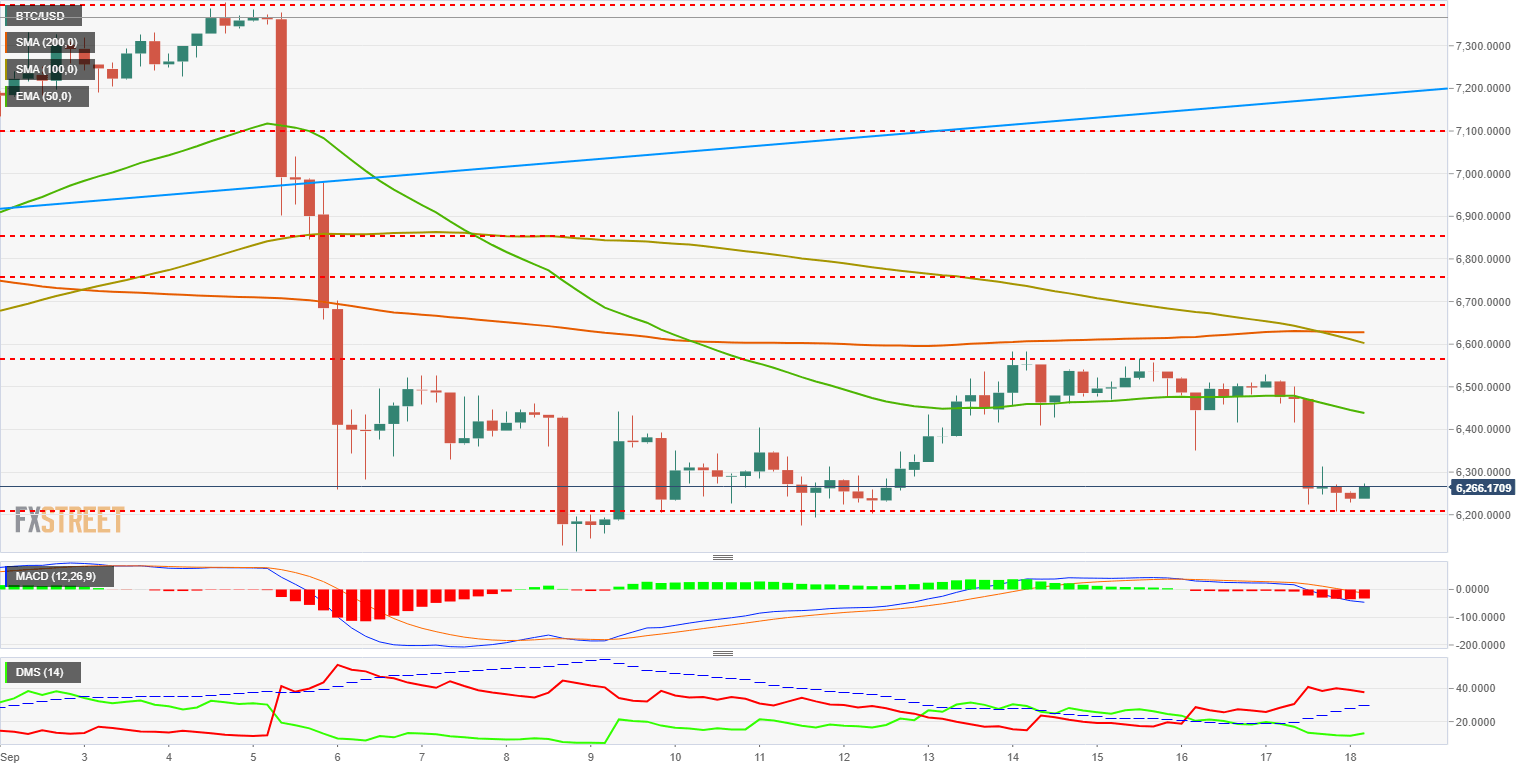 The MACD at 240-Min continues to be cut down into negative territory. The pattern of perforations of the line of 0 in the MACD in the Crypto market begins to be recurrent. The pattern is open but with a statistical advantage for the side of the bulls.

The DMI at 240-Min shows the bears in advantage but it is losing strength. On the other hand, the bulls slightly increase their activity but not significantly. The distance between the D- and the ADX line gives room for the continuity of a bearish environment.

The ETH/USD is currently trading at the $200 price level after leaving the recent low of $192.

Above the current price, the first resistance is at $210 (EMA50) which if exceeded would leave the recent range at a maximum of $210 (congestion resistance and SMA100) as the next target. In case the ETH/USD manages to overcome this second resistance, there is clean space up to $255, where the SMA200 awaits. 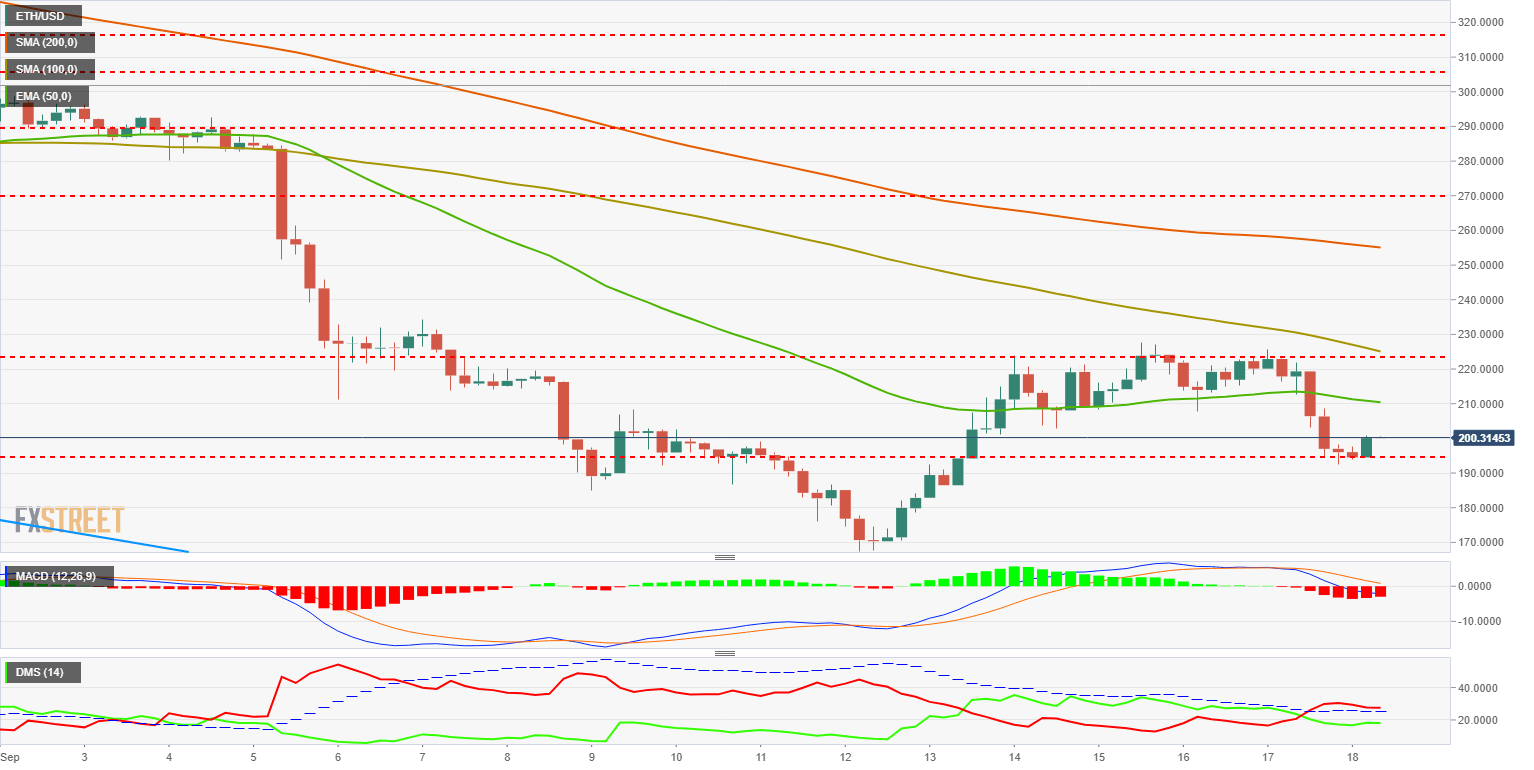 The MACD at 240-Min continues to be cut down and below the signal line at level 0. The drawing is somewhat more aggressive than in the case of the BTC/USD and the probabilities of new rises increase.

The DMI at 240-Min also shows the bears in control, but very close to the ADX line, so a low cut is very possible and would indicate a downward decrease. The bears react slightly but don't seem to be in a hurry to take control again.

The XRP/USD is currently trading at the $0.272 price level after leaving recent highs marginally above $0.28. Ripple is holding up very well on this downtrend and maintains a fairly positive technical side. An inverted, somewhat deformed S-H-S appears to be forming. 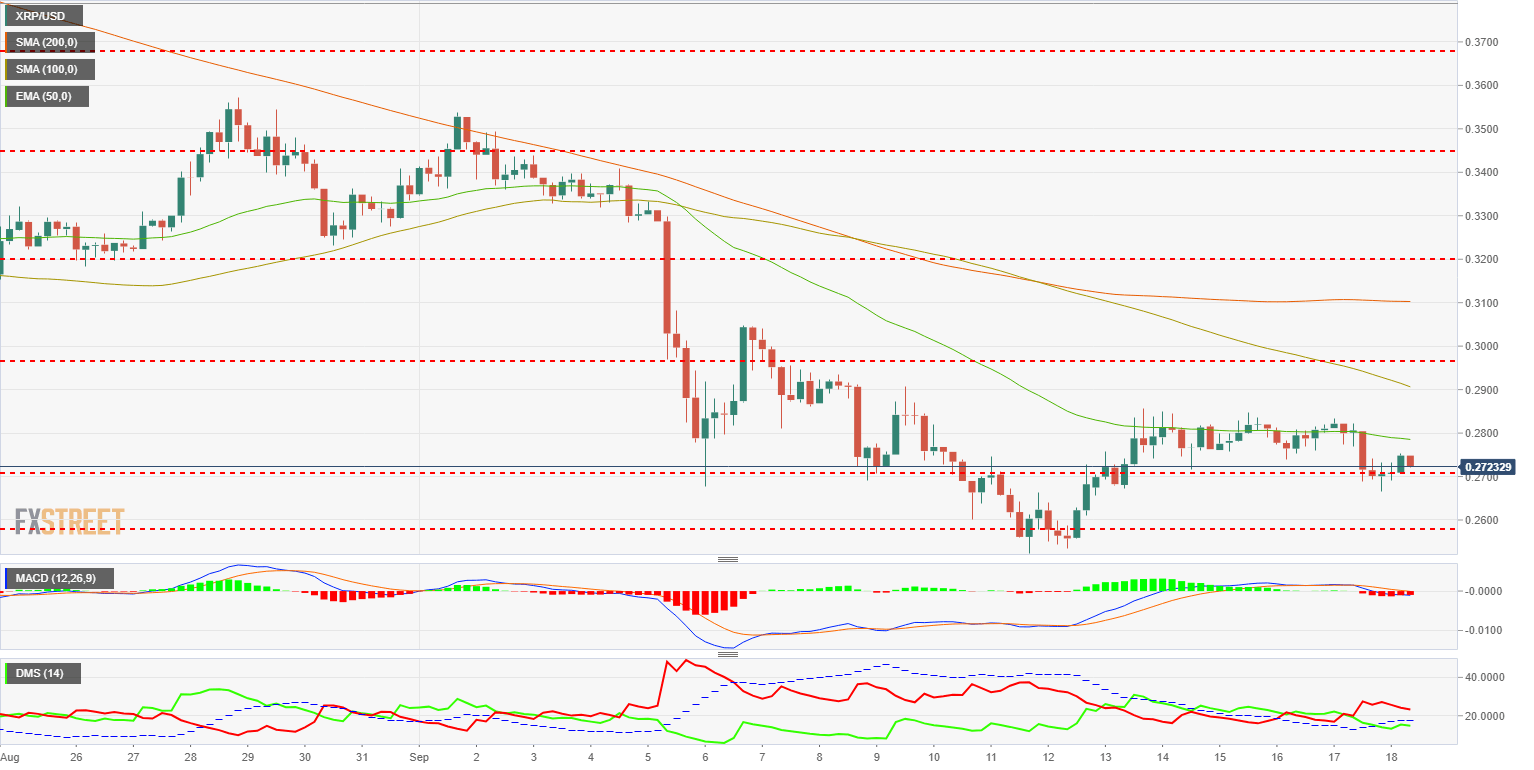 The MACD 240-Min is slightly crossed downwards with little inclination. It moves above the 0 line. The outlook is much more positive than Bitcoin or Ethereum.

The DMI at 240-Min shows the bears in control, although decreasing their strength progressively. Of course, the bulls recover and are about to surpass the ADX, which would give a signal of the end of the price weakness. The ADX remains below 20 and therefore does not give any category of the trend to the bearish movement.

Bitcoin (BTC/USD) posted small losses on Saturday and closed the day above the critical Fibonacci level to gain traction during the Asian trading hours. As of writing, BTC was trading at $9,940, adding 2.75% on the day.

Boosted by the positive mood surrounding the major cryptocurrencies, Ethereum easily erased the losses it suffered on Saturday and preserved its bullish momentum to climb above $270.

XMR/USD bulls retain momentum and keep the price above $80

XMR/USD bulls managed to retain control in the early hours of Saturday as the price went up from $80.40 to $81. XMR/USD is currently trending in a downward channel formation after it had ...