The world’s no. 1 digital coin, Bitcoin, is seen struggling to catch up with the broader market recovery, as we head towards the weekly closing. However, the third most traded cryptocurrency, Ripple, remains the main laggard amongst the top three most favorite digital assets as it loses nearly 4.5% over the past week. Meanwhile, the first coin defends the minor bids, enjoying a market capitalization of $ 159.88 billion. The total market capitalization of the top 20 cryptocurrencies now stands at $243 billion, as cited by CoinMarketCap.

The top three coins are seen extending the recent trading range in the week ahead, with the key supports and resistances noted below, as indicated by the Confluence Detector. 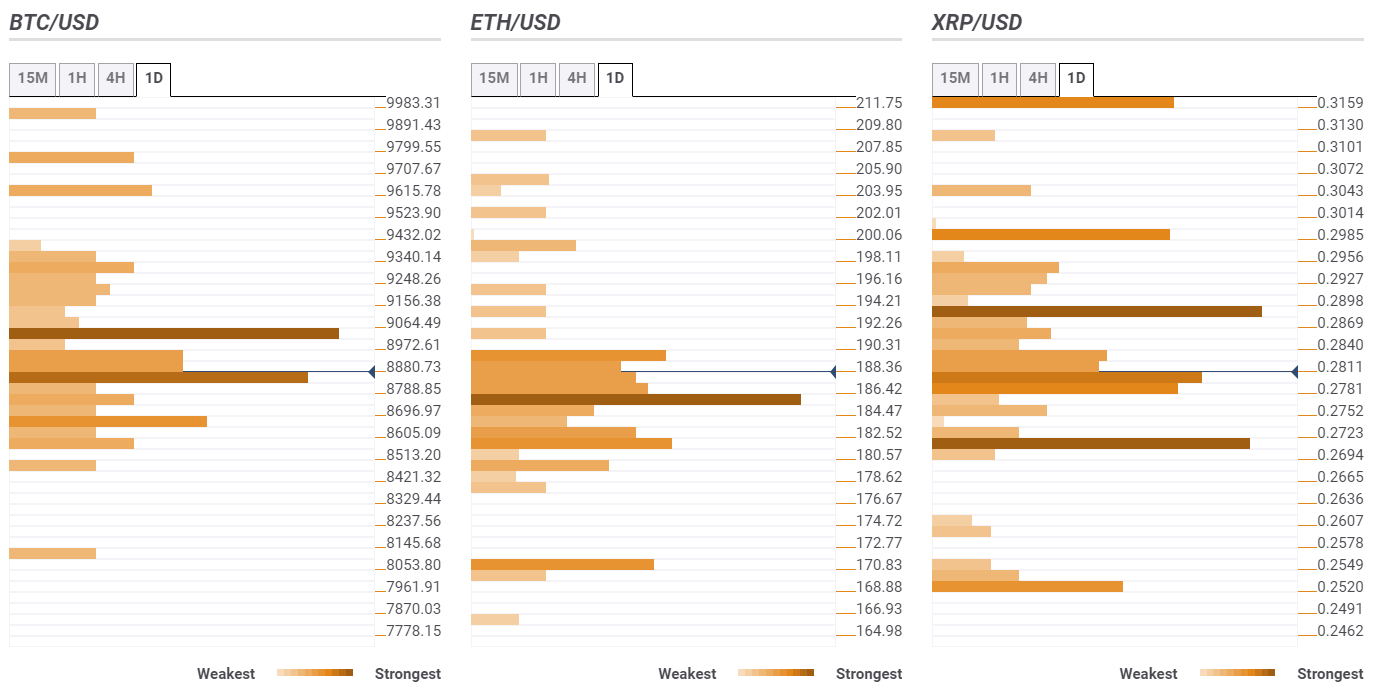 Bitcoin is trying hard to sustain the latest leg higher above the $ 8,800 mark, as it continues to face rejection around 8,880 levels, the strong confluence of the daily Bollinger Band middle boundary on the hourly sticks, , 38.2% Fibonacci retracement (Fib) of the daily and 10-4H Simple Moving Average (SMA).

Buying pressure will accelerate on a sustained break above the last, with the next supply zone aligned between 9k -9,064, the confluence of the round number and 38.2% Fib of the weekly price action coincide.

Despite the recent upside attempts, the path of least resistance could be to the downside, in absence of strong support levels that could guard the downslide, except for the one seen around 8,650, where the 161.8% Fib of the daily price move and 200-4H SMA coincide.

The recovery in Ethereum meets fresh supply on every attempt towards a pack of resistances located between 187.50-190, despite having taken out the key resistance near 185.50, where the Fib 38.2% and 23.6% Fib of the daily price action intersect with the critical weekly Fib 61.8%.

Only a break above the 190 handle could offer a fresh zest to the ETH bulls.

To the downside, the immediate support of 161.8% Fibonacci retracement of the daily price action and 200-4H SMA around 181.50 will be tested. On a failure to resist the last, the price could slump to 170 levels amid a lack of alignment of the strong supports.

The price risks further downside should it breach the daily lows of 0.2768. The next support awaits at 2,709/10, where the previous low and Fib 61.8% of the month’s action coincide.

Looking for the best path to the Moon

The fight for dominance in the crypto market is at a new turning point. Yesterday at mid-morning, Ethereum showed intentions to move higher. A significant breakout of the long-term downtrend in the ETH/BTC pair can confirm the plans of Ethereum.

XRP/USD trapped in a range, the range narrows

XRP/USD has stalled in a tight range limited by $0.1700 on the downside and $0.1800 on the upside. The coin  has stayed mostly unchanged both on a day-to-day basis and since the beginning of Thursday.

ETH/USD is changing hands at $228.60. The coin has lost over 1% since the start of the day and gained 1.4% on a day-to-day basis. Ethereum is the second-largest digital asset has the current market value of $25.6 billion and an average daily trading volume of $6.5 billion.

LTC/USD to continue hibernating in a range

Litecoin is the seventh largest digital asset with the current market value of $2.7 billion and an average daily trading volume of $1.15 billion. The coin is locked in a tight range below $42.00.

Bitcoin bottomed at $8,899 on Thursday, June 25, and recovered to $9,200 by the time of writing. While the pivotal $9,000 remains unbroken, the coin has been oscillating in a tight range for about two weeks now.