Bitcoin will see a renewed surge in volatility soon – Kraken

Kraken cryptocurrency exchange recently released its August 2020 Bitcoin volatility report. As per the report, the recent decline in BTC’s price is not to be worried about as historically, September has been the worst-performing month for the flagship coin.

September is #Bitcoin's worst performing month, with an average return of -7%.https://t.co/fAaXgFL2V7 pic.twitter.com/oLp6MXBKTE

The report also mentioned that BTC’s “annualized volatility” dropped to as low as 15% in July. Whenever this has happened in the past, the coin has always bounced back stronger, as per Kraken. On average, Bitcoin’s volatility surge was marked by a peak at 140%, during which investors generated 196% returns in 94 days.

What is a 'suppressed pocket' and why is it good for #Bitcoin?

After falling into one, #BTC has historically averaged volatility of 140% and gains of +196%. https://t.co/fAaXgFL2V7 pic.twitter.com/1WJidPSgx7

In the report, Kraken also pointed out the loss of Bitcoin’s market dominance to altcoins due to the rise in the DeFi craze.

Since the start of 2020, altcoins have been stealing market share from bitcoin. Following the emergence of DeFi in 2Q, bitcoin’s dominance has fallen further.

According to Kraken, BTC could continue to lose market share to rising altcoins. But when traders are done extracting profits, selloffs will lead to capital entering the Bitcoin market, resulting in the stretch of BTC's dominance.

In its quarterly report on cryptocurrencies, the Singapore-based DBS Bank said that there had been an acceleration of digital asset adoption led by the pandemic. Taimur Baig, the bank’s chief economist, identified two distinct demand phases - pre-pandemic and post-pandemic.

Pre-pandemic demand was largely speculative. People saw bitcoin had a spectacular run and wanted to be part of that game, so what’s wrong with putting in 1% of assets under management [into BTC]. But I think post-pandemic is beyond speculative. It’s more about, “This thing has fixed circulation, it will not be debased.” People are worried about dollar outflow and wondering if they should hold crypto in addition to gold as a safe-haven currency.

DBS isn’t the only bank to observe this trend. Singapore-based digital asset bank Sygnum also echoed this view. Martin Burgherr, co-head of clients at Sygnum Bank, noted that since the outbreak of the COVID-19 pandemic, there had been increased interest in digital assets from businesses and individuals. They view digital assets as an alternative and a way to protect against growing inflation risk, as per Burgherr.

If you look at Venezuela or even Lebanon, which is in the middle of a massive financial crisis, could you, at some point going forward, conceive that instead of linking your currency to the U.S. dollar, you link it to a cryptocurrency?

Discussing China’s CBDC efforts, Baig said that there are two dimensions to consider. Firstly, a digital renminbi (e-RMB) is how China’s central bank, the People’s Bank of China (PBoC), can dominate its sprawling fintech ecosystem noted. The second dimension is about the potential for an e-RMB to become a way for individual nations to bypass the USD settlement mechanism, which makes them “somehow answerable to the Southern District [Court] in New York or the Securities and Exchange Commission,” said Baig.

According to a new report by British defense and aerospace company BAE Systems, most criminals involved in money laundering activities prefer cash over cryptocurrencies. The report further noted that money laundering is one of the gravest global threats to the economy.

The activities of all cyber-criminals, whether working individually, as part of a small gang, as organized crime groups or even for a nation-state, have resulted in annual total cyber-crime revenue estimated at USD 1.5 trillion.

On behalf of the global financial messaging services provider SWIFT, BAE Systems noted that the role of cryptocurrencies in money laundering is minuscule compared to cash. This is contrary to a common fear that digital assets are an easier way for criminals to move and liquidate stolen funds. The report stated that the number of identified laundering cases through virtual assets is “relatively small” compared to the volumes of cash laundered using traditional methods.

Nevertheless, concerns regarding the privacy-centric features of some cryptocurrencies continue to prevail in the community.

The raft of alternative cryptocurrencies that offer greater anonymity, as well as services like mixers and tumblers that help obscure the source of funds by blending potentially identifiable cryptocurrency funds with large amounts of other funds, could boost the appeal of cryptocurrency for nefarious purposes.

SWIFT pointed out to the North Korean cybercrime group, the Lazarus Group, in the report. In 2018, the group organized a massive cyberattack and stole $30 million worth of digital assets. 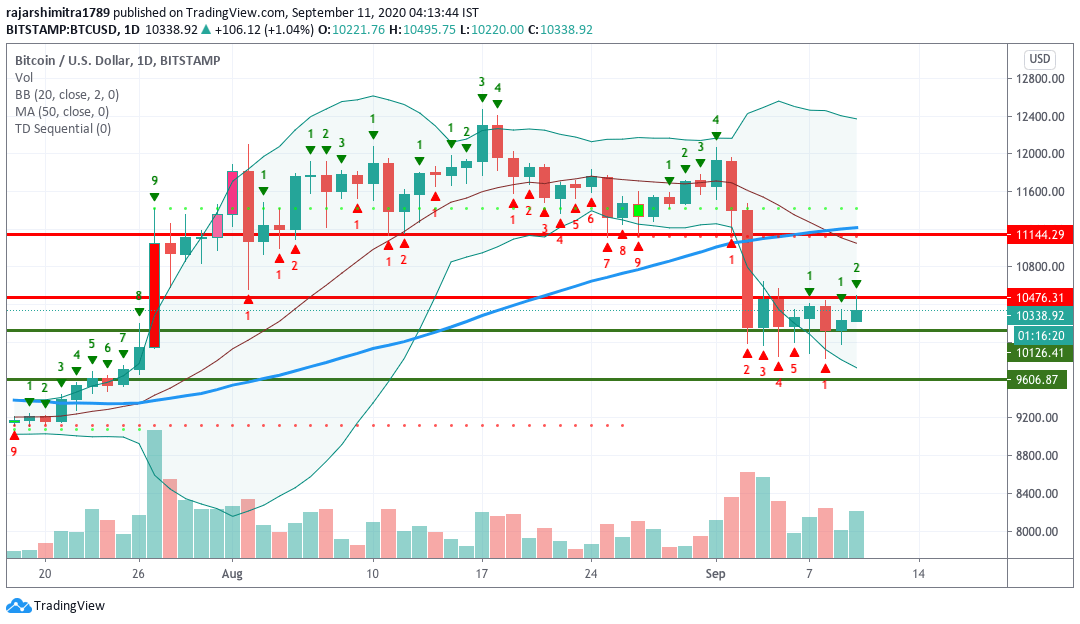 BTC/USD bulls have stayed in control for the second straight day as the price went up from $10,216.60 to $10,350.39. It has charted two green candles in the TD sequential indicator as buyers aim for the $10,476.30 resistance line. If they overcome that line, the currently bullish TD sequence sees the price reach up to $11,148.75 before it experiences a reversal.

BTC is sitting right on top of healthy support levels. On the upside, the price can go up to $11,258.20 before it meets strong resistance. As such, we can conclude that Bitcoin currently has sufficient upside potential.

The adjusted weekly value of Ethereum trades has recently surpassed Bitcoin for the first time since 2018, as per analytics firm Coin Metrics. A few days back, the “7-day average adjusted transfer value” reached $3.08 billion for Ethereum. On the other hand, Bitcoin hit $3.01 billion. Coin Metrics uses the metric mentioned above to capture the real economic output of the Ethereum market. The analytics firm attributes the surge to the rise of decentralized finance (DeFi). 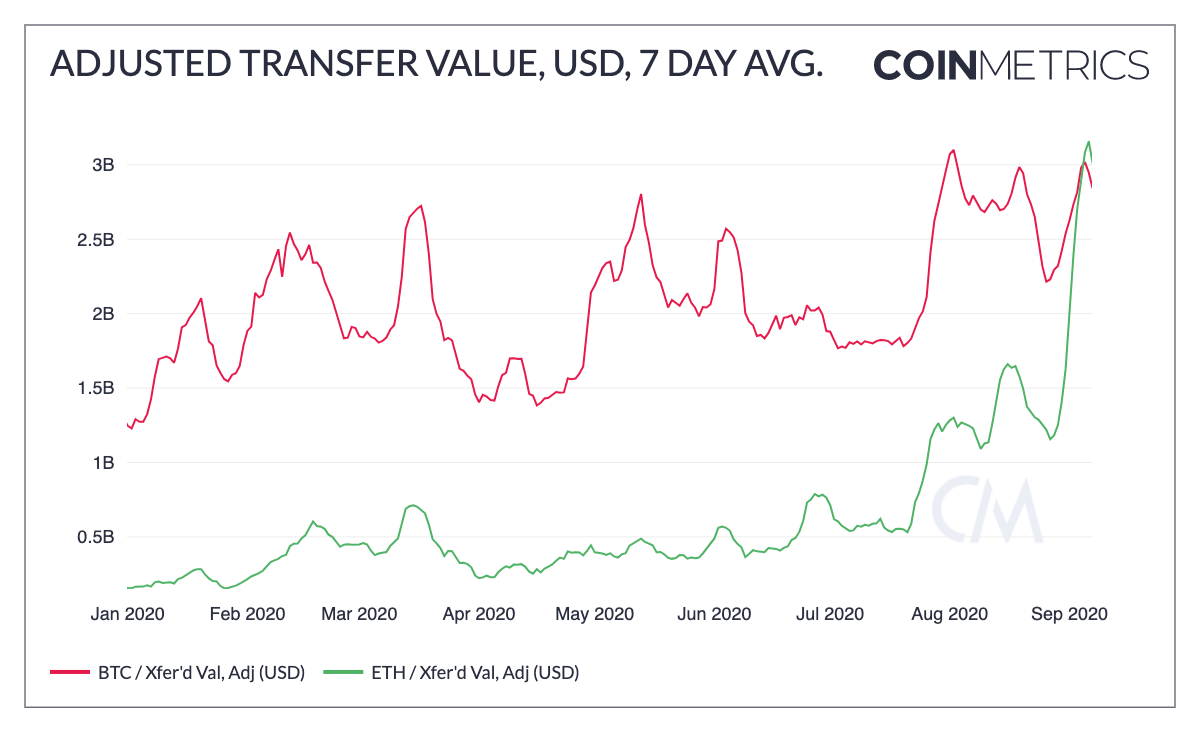 DeFi Pulse data shows that the total value locked (TVL) in DeFi protocols is around $7.6 billion. Coin Metrics pointed to the introduction of yearn.finance’s yETH vault as one of the recent DeFi developments that’s responsible for the economic output spike. There is $78.6 million worth of ETH locked in the yETH vault and $1.12 billion locked up in yearn.finance overall. Plus, all the drama surrounding SushiSwap also majorly contributed to this monetary flow.

ETH/USD bulls have bounced up from the $335.80 support level and taken the price to $367.88. Ethereum managed an intraday high of $377.80 before it retreated away. However, the bulls will want to regain momentum and aim for the $377.60 resistance level (SMA 50) once again. The MACD shows decreasing bearish momentum following the recent price action.

ETH is not sitting above healthy support levels. As can be seen in the IOMAP, the price can potentially go down to $355.82 before it hits notable support. On the upside, the price can go up to $380 before it encounters strong resistance.

The ETH/USD 4-hour chart shows that the buyers and sellers are currently trying to regain control around the SMA 50 curve. The TD sequential keeps changing between the green one candlestick and the red one candlestick. If the bulls somehow manage to retain control, they should be able to take the price up to the $390 resistance line before it experiences a reversal.

XRP/USD has gone up from $0.2382 to $0.2427 since this Wednesday. The William’s% R is still hovering inside the oversold territory, so further positive action is expected. Having said that, it’s difficult to see how the bulls can challenge the $0.2547 resistance level any time soon.