XRP price is traversing a bullish pattern on a higher time frame and is presently bouncing off a stable support level. If this uptrend continues, Ripple will likely more than quadruple its market value in the coming days.

Bitcoin price has flipped the 200-day Simple Moving Average (SMA), which is a massive bullish development. Therefore, investors can expect this rally to continue to climb with minor retracements or consolidations.

The uptrend from July 20 to August 8 was the initial leg up that reignited the flame in many altcoins, including Ripple, as shown in the chart below.

While Bitcoin price rallied 59% during the said time frame, XRP price climbed 63%, suggesting that altcoins outperformed big crypto. The same trend can be seen with Ethereum and other altcoins, which indicates that altcoins are due for a massive run-up.

Therefore, if Bitcoin price extends its consolidation or uptrend, altcoins will also continue to shoot up. 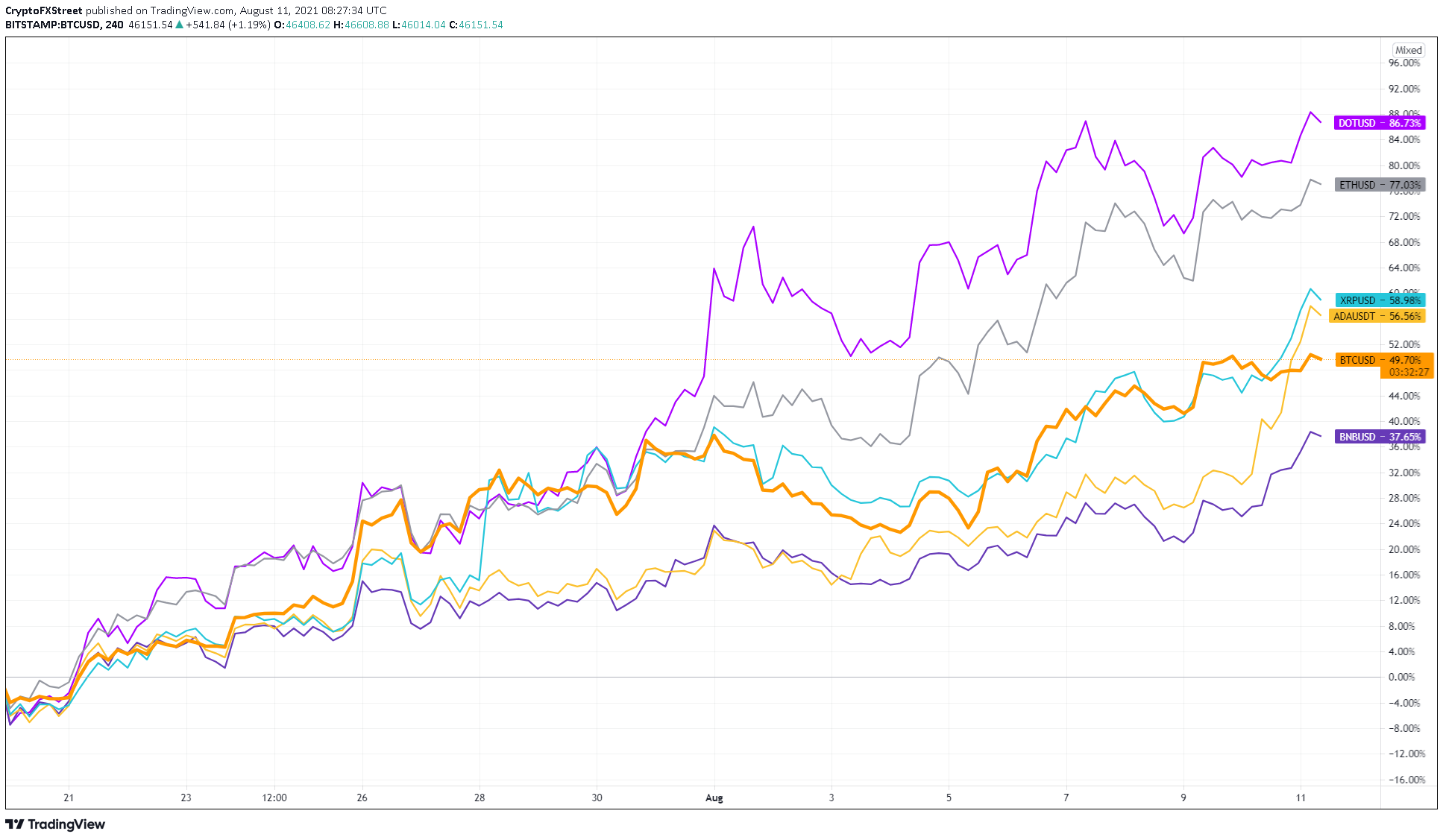 Despite the bullishness seen in the cryptocurrency markets, Ripple seems to be relatively in the dumps, at least from a non-technical standpoint due to the lawsuit with the Securities & Exchange Commission (SEC).

In the latest development of this case, the commission filed a motion to request relevant communication between Ripple employees.

According to Ripple executives’ attorney James Filan, this appeal has been set in motion with the Southern District of New York, requesting Judge Sarah Netburn, and states,

The battle between the SEC and Ripple has dragged on for roughly eight months with no apparent solution or conclusion in sight. While the lawsuit put Ripple on the defensive at first and cost the company its partnership with MoneyGram, among other things, partnerships seem to be sprouting up, especially in the eastern hemisphere.

Ripple’s collaboration with Oman’s BankDhofar opened up the cross-border transfer channel between the bank in Oman and IndusInd, a private bank in India, via the RippleNet.

Additionally, the company also launched the first live implementation of On-Demand Liquidity. This development comes with the support of Japan’s largest money transfer provider, SBI remit and Coins.Ph, a popular mobile wallet service in the Philippines.

To sum it up, Ripple converted the PR nightmare of a lawsuit to leverage support from the eastern companies. While it is unlikely the case will resolve anytime soon, a positive development, especially a win, will undoubtedly be a trigger that XRP price might need to propel a whopping 300%.

Regardless of how the lawsuit resolves, XRP price shows the formation of a multi-month pattern that indicates a bullish outcome.

The last two times XRP price tagged the upper limit of the parallel channel it led to a sell-off. The same is true for a bounce off the lower trend line, which was seen on July 20. So far, XRP price rallied 75% from this point and is fast approaching the channel’s midpoint.

Assuming BTC keeps up appearances, the remittance token will likely rally nearly 300% to tag the upper limit, coinciding with the 2018 all-time high at $3.317.

However, this climb will not be a cakewalk and will face headwinds at three points. Ripple has already cleared the first barrier at $0.771 and is approaching the second one at $1.090. Producing a decisive daily candlestick close above $1.090 will overcome the channel’s midpoint and open the path for further gains. 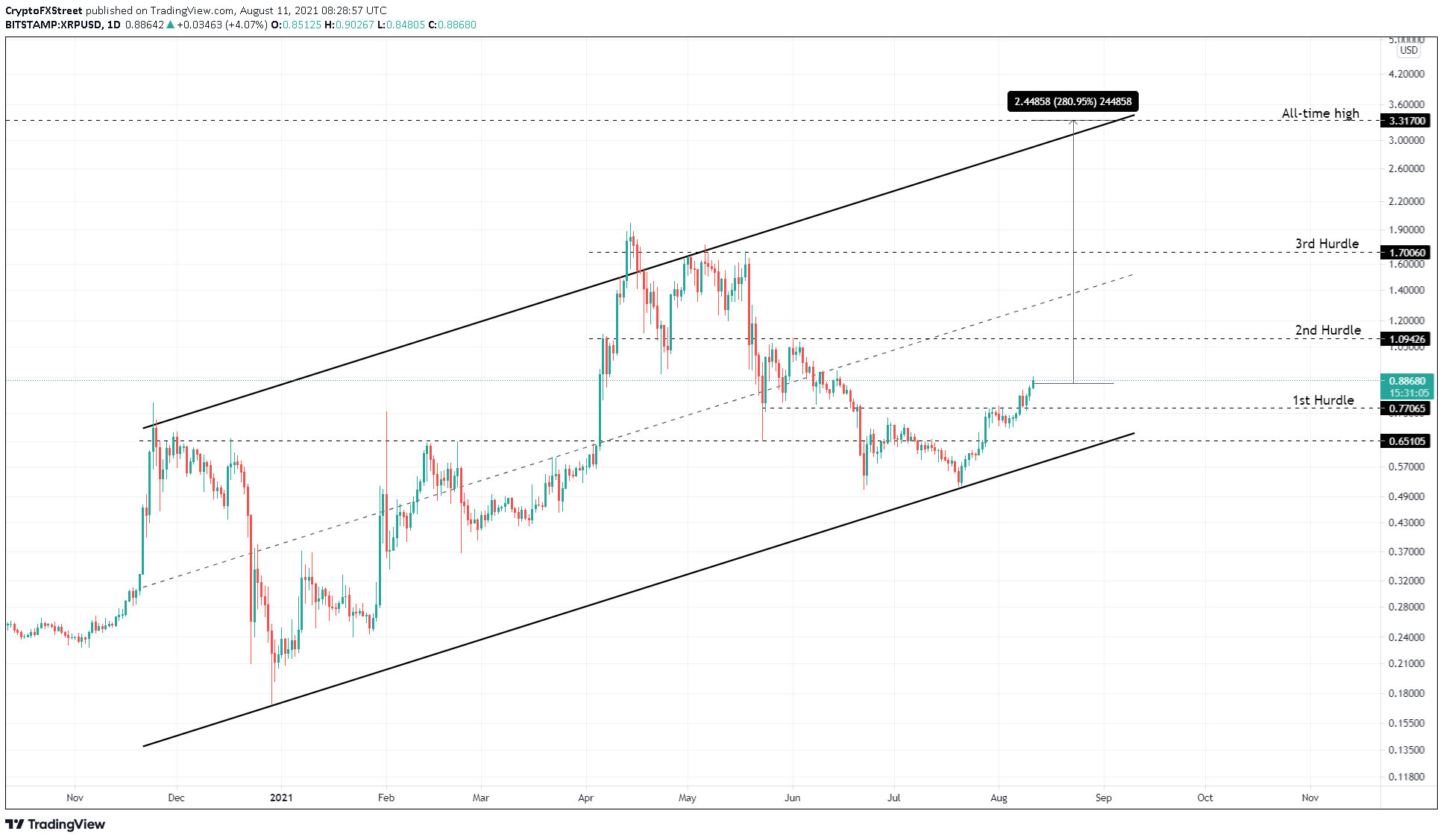 While things seem to be going in Ripple’s favor, investors need to watch for a shift in a trend that favors the bears. There are two ways on how the bullish thesis could face invalidation; a rejection at the channel’s midpoint or a reversal in the big crypto that provides that the uptrend seen so far was a failed attempt at a bull rally.

Regardless of what causes a trend reversal, the inability of the buyers to push through the second hurdle at $1.090 will indicate weakness. This development could push XRP price down to $0.771, where the bulls could take another jab at the climb.

If the selling pressure spikes, shattering $0.771 and producing a decisive daily candlestick close below it, it will invalidate the optimistic narrative detailed above. This move would set a lower low and trigger a potential retest of the parallel channel’s lower trend line around $0.651.