Tezos downtrend has remained intact since the peak traded in August around $4.5. Initially, the breakdown was massive and sharp, but buyers managed to balance by embracing support at $1.90. Recovery ensued from this level in September, but the lack of momentum to rise above the resistance at $2.5 limited the price action.

Meanwhile, Tezos is trading at $1.92 while holding dearly to September's support at $1.9. Although buyers are working around the clock to ensure that XTZ resumes the uptrend, the Relative Strength Index (RSI) downward action eyeing the oversold reveals a bearish cloud is hovering over the crypto.

For now, the path of least resistance is bound to remain southwards until XTZ finds formidable support from which a bullish momentum can build. It is also essential to realize that a drop below the crucial support at $1.9 may trigger another massive selloff heading to the main support between $1 and $1.25.

Similarly, the bearish outlook is reinforced by the TD Sequential indicator's sell signal in the form of a red nine candlestick. Besides, Tezos is trading under all the moving averages, including the 50 SMA, 100 SMA, and 200 SMA, hence intensifying the pressure on critical support levels. 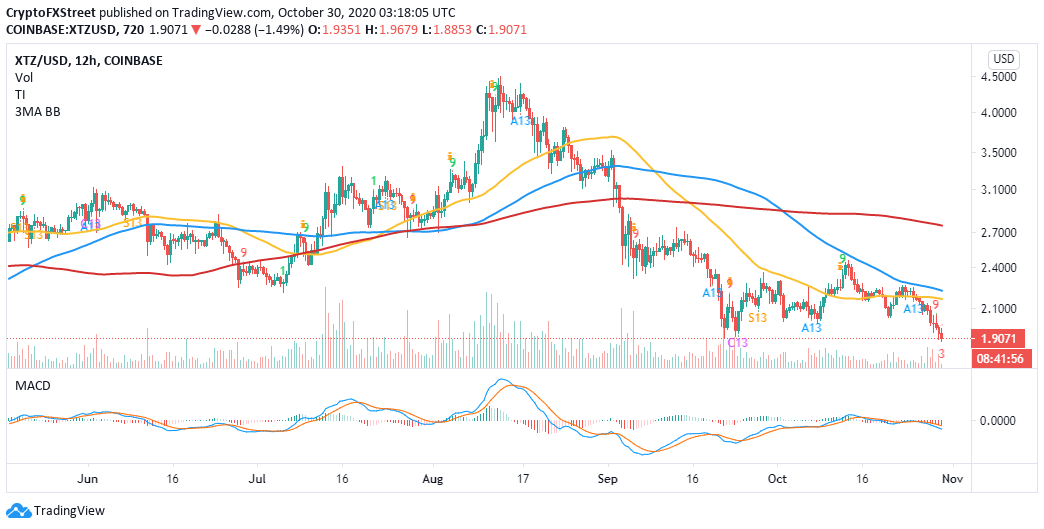 The Moving Average Convergence Divergence (MACD) also confirms the bearish narrative. The death cross (formed by the 100 SMA crossing below the 200 SMA) gives weight to the selling pressure.

The hourly chart shows the possibility of a recovery emanating from the support at $1.9. The bullish move is stressed by the RSI reversing from a downward trend. If the RSI holds onto the midline recovery, more buyers may be encouraged to join the market, creating enough volume for an uptrend.

Moreover, closing above the 50 SMA would allow the bulls to shift their focus to $2.25. The formation of a short term descending wedge pattern may result in an upswing, sending the price significantly past $2. Meanwhile, it is essential to keep in mind that delays may occur at the 100 SMA and 200 SMA, respectively.

Bitcoin at $5,000 charts begin to pop up on Twitter, how likely is such a massive correction?

Cardano (ADA) has climbed to the 8th position in the global cryptocurrency market rating. The coin hit $0.194, the highest level since July 2020, on November 24, before the correction started.

The entire cryptocurrency market suffered a massive crash on Thursday. Sushiswap price dropped by more than 20% within hours but managed to recover almost instantly, hitting $1.285.