Rapid expansion in the Axie Infinity ecosystem and a parabolic rally from AXS triggered a 100% surge in the price of SLP.

Small Love Potion (SLP), a token in the Axie Infinity (AXS) ecosystem that is minted through gameplay as a reward to users, also broke out with a triple digit gain. SLP can then be used as a currency to breed Axies, which are nonfungible token-based creatures that populate the Axie Infinity world. 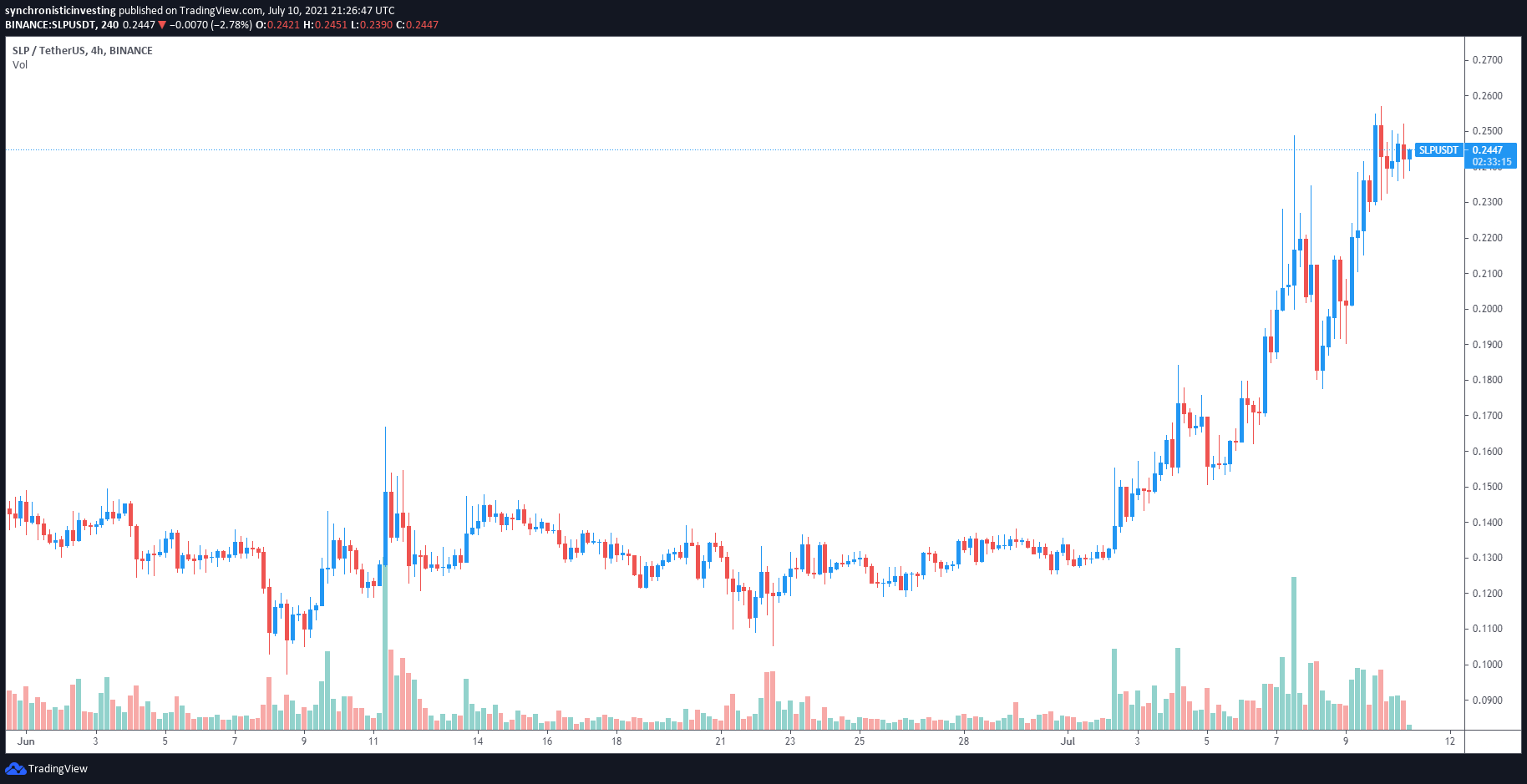 Data from Cointelegraph Markets Pro and TradingView shows that the price of SLP has surged 102% from $0.127 on July 1 to a weekly high at $0.257 as new users flood into the play-to-earn digital battle pet game and drive the revenue of the Axie Infinity ecosystem to new highs.

The success of SLP depends in large part on the overall growth and adoption of Axie Infinity, which has seen a significant uptick in new users since the protocol migrated to the Ronin sidechain of the Ethereum network at the beginning of May.

A recent report from Delphi Digital highlighted that interest in the Axie ecosystem has grown at an “exponential rate since the launch of Ronin,” with the biggest growth seen in the Phillippines, Venezuela, Cuba, Qatar and the United Arab Emirates (UAE) beginning near the end of April. 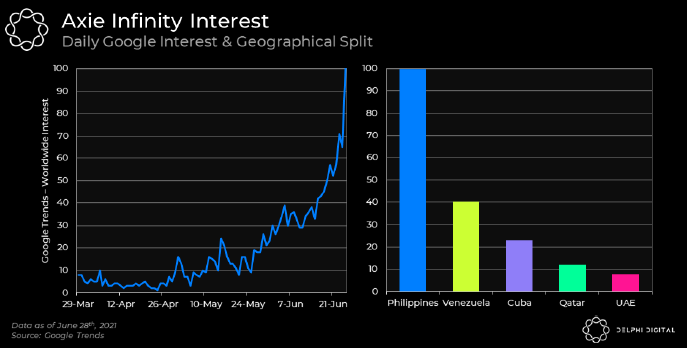 The increase in interest has led to an influx of new users over the past two months as evidenced by the growth in daily active users, unique Axie holders and the number of Discord members. 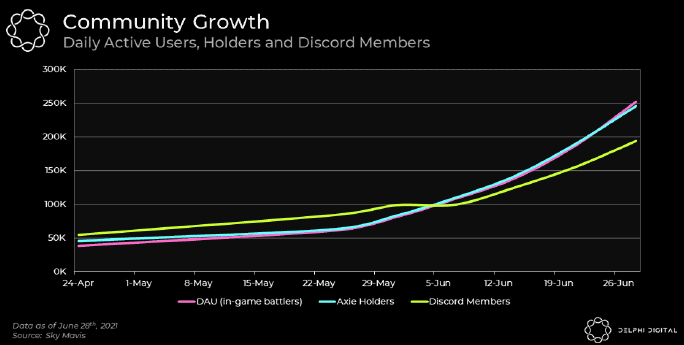 As new users enter the ecosystem, more Axies are needed in order for them to engage in gameplay, which has led to an increased demand for SLP since it is required in the process to breed Axies.

One reason for increased usage in certain geographical reasons relates in large part to the economic struggles of the population in those regions.

With users able to earn SLP daily through gameplay or farming SLP, some participants have been able to make more money through Axie Infinity than college graduates earn from working.

The process of breeding can also be quite lucrative for users fortunate enough to receive a “Mystic Axie,” a rare form of Axie that now have a price floor of 30 Ether while genesis plots of land in the Axie Universe can fetch nearly 270 Ether.

Another Genesis plot just sold for almost 270 eth. And mystic floor price is climbing to 30 eth. This is just unreal. @AxieInfinity $AXS pic.twitter.com/JAaRjpJU4c

As a result of the growth the ecosystem has undergone since early May, the daily volume of sales on Axie recently surpassed $25 million with more than 50,000 NFTs being sold per day. 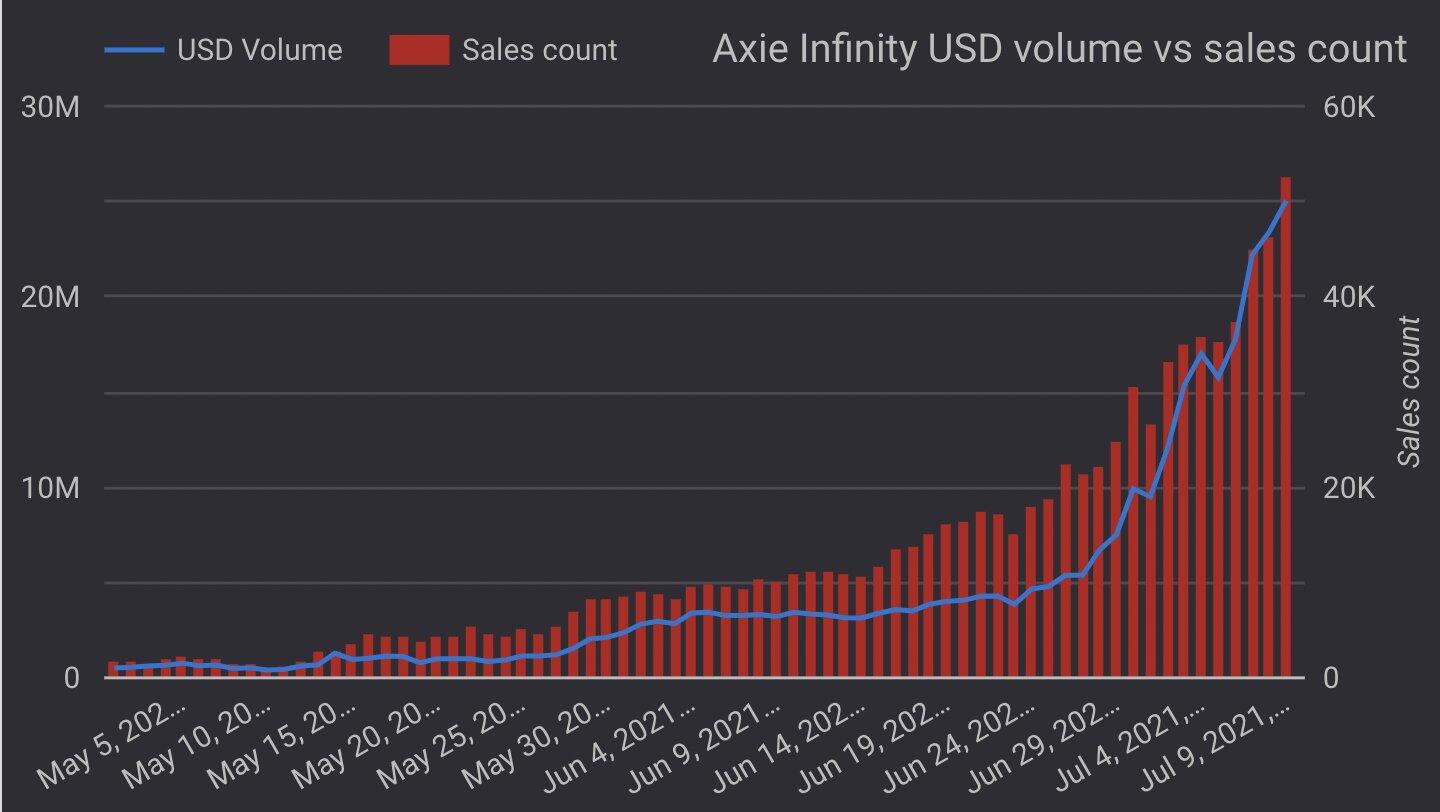 To help put the significance of the growth seen in the income generated from the Axie Infinity ecosystem into context, over the past week the protocol generated more fees than all other crypto applications combined.

While the recent growth for Axie Infinity is impressive, it remains to be seen if the current pace is capable of being maintained into the future and the long-term success of SLP hinges upon a sustained expansion of the Axie ecosystem.