Shiba Inu price has been engaged in a lengthy bottoming process that appears to be finally resolving to the upside after SHIB triggered the neckline of an inverse head-and-shoulders pattern on June 29. If the digital asset can overcome the declining 50-day SMA, it may rally 30% before identifying relevant resistance and interested sellers.

Shiba Inu price enters July with a bounce in its step

SHIB investors have been patiently waiting for some clarity in the price structure since the rapid decline in May. Shiba Inu price hinted at a few turning points, but the weight of the cryptocurrency market volatility kept the meme token from defining a precise turning point. However, this changed on June 29 as SHIB triggered an inverse head-and-shoulders pattern’s neckline before falling back into the base.

The 70% advance from the June 22 low did push the twelve-hour Relative Strength Index (RSI) near an overbought condition, so investors should not label the pullback into the base as a failure but a necessary pause in the evolution of the pattern. Nevertheless, it is essential to note that the 50-day SMA at $0.00000939 lingers just above the neckline, suggesting the pause may endure a few days.

Interestingly, other cryptocurrencies like XRP and ZIL formed inverse head-and-shoulder patterns before delivering significant returns, albeit from a larger footprint on the charts. 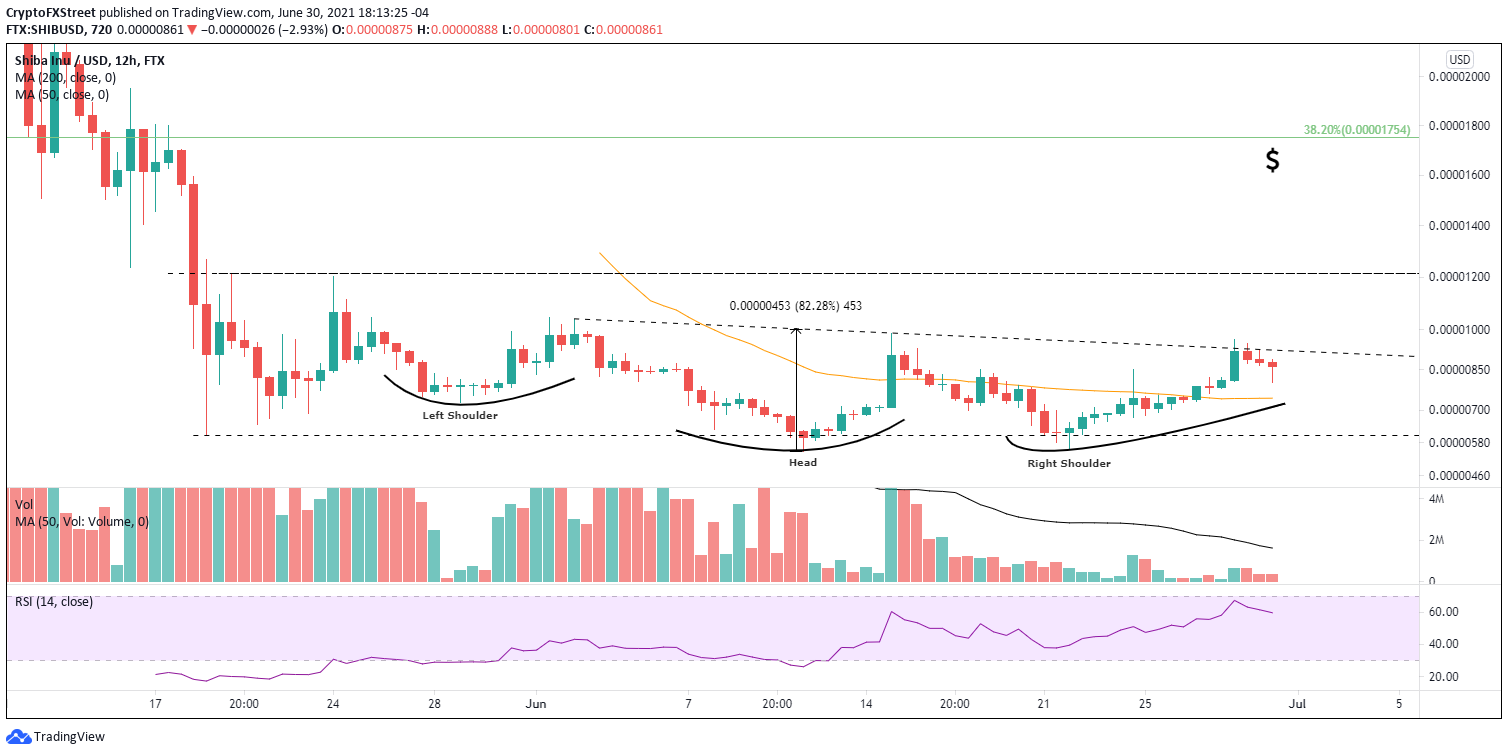 For now, Shiba Inu price action is constructive, but if the pause evolves into a deeper pullback, SHIB needs to hold the 50 twelve-hour SMA at $0.00000744 or risk revisiting the May 19 low or even a sweep of the right shoulder low of $0.00000560. Of course, this scenario gains precedence if the cryptocurrency complex reverts to heavy selling.

The SHIB 30-day MVRV ratio, currently at 13.75%, is indicating a mildly overvalued condition. More specifically, it reveals that the average gain of all addresses that have acquired SHIB in the past 30 days is 13.75%. It is a period that covers the majority of the bottoming process since the May crash.

The SHIB 30-day MVRV ratio is now positive, but it does not confirm a large reservoir of selling pressure that could enter the market at current prices. However, investors may aim to capture profits around the $0.00001204-$0.00001214 range after the lengthy bottoming process. The 30-day MVRV ratio would still be well below the April and May highs, but that price range would represent a gain of over 100% from the right shoulder low of $0.00000560, representing a notable overvalued condition and a reason to sell.

Shiba Inu price is at an inflection point on a micro-scale as it navigates the neckline and the approaching 50-day SMA, but SHIB is far from an overvalued level that would spur heavy selling. For now, it is a technical story until buying pressure can unhook the resistance and release Shiba Inu price to better outcomes.

MATIC continues to march higher with $3 in sight

MATIC price action has certainly been some of the most dramatic post flash crash. Multiple vigorous attempts by short-sellers to push MATIC lower have all failed and have led to MATIC pushing towards new all-time highs. MATIC price action, in case you ...

XRP price, like almost every other cryptocurrency, showed strong signs of recovery after the shock of this past Saturday’s flash crash wore off. The past three days of congestion after a strong rally from the lows may begin a new uptrend for XRP.