SafeMoon price failed to build on the breakout from an inverse head-and-shoulders formation on May 25, leaving SAFEMOON exposed to fall below the right shoulder, thereby voiding the bullish outlook for the new cryptocurrency.

SAFEMOON is not a household name in the cryptocurrency complex. Still, since its launch in March it has commanded considerable attention from keen market operators as the next iconic altcoin. Currently, SafeMoon price trades at fractions of a cent, meaning that investors can amass a position of millions of SAFEMOON.

SAFEMOON is not listed on the major cryptocurrency markets, so most interested investors can access it on the decentralized PancakeSwap exchange. The latest tally shows there are now 600 trillion SAFEMOON tokens in circulation. Still, developers continue to burn tokens manually with the logic that a smaller supply should drive the price higher.

From the launch in March until the April 20 high, SafeMoon price climbed an astounding 20,000%, peaking at around $0.000015. Due to the rise, investors were immediately attracted to the highly speculative cryptocurrency, but by April 21, FOMO had exited the building, and SAFEMOON collapsed 90%.

SafeMoon price is locked in a larger downtrend that began on May 11 and is marked by intermittent corrective bounces. The recent inverse head-and-shoulders pattern presented a higher probability opportunity for investors to begin pilot buys with precise risk levels. Yesterday, the subtle opportunity was rejected when SAFEMOON traded below the right shoulder at $0.00000438.

The rejection has quickly shifted the outlook from positive to negative. There is no credible support at the time of writing until the May 23 low at $0.00000285, followed closely by the May 19 low at $0.00000261, yielding a 35% decline. The tight SafeMoon price range framed by the two lows should instigate some buying interest from the ‘buy-the-dip’ investors. 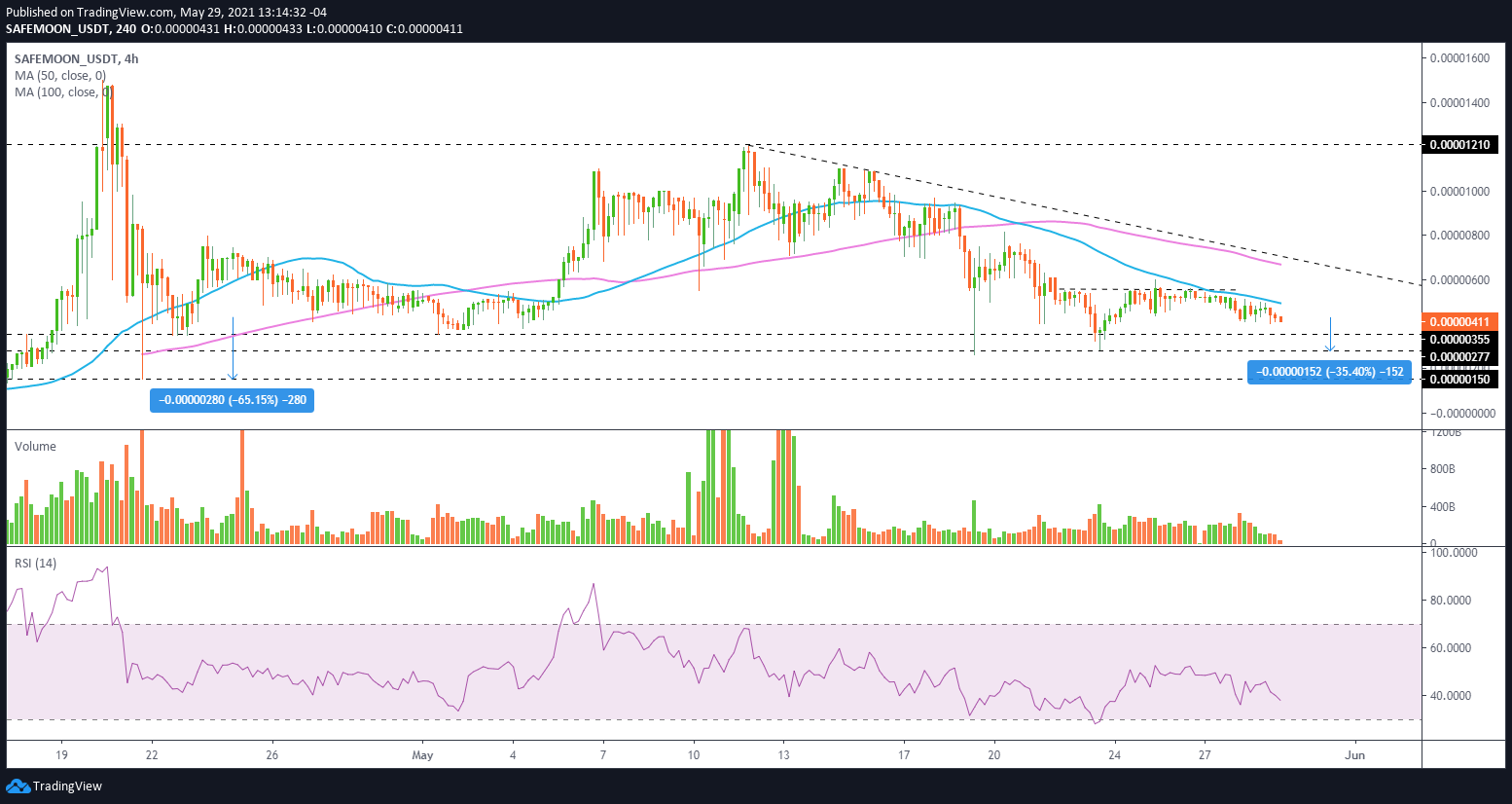 On the other hand, if SafeMoon price can stabilize in a price range above $0.00000355 and formulate a new, actionable pattern, SAFEMOON could quickly overcome the resistance outlined by the 50 four-hour SMA at $0.00000519.