Bitcoin (BTC) starts a new week in familiar territory as markets move into the United States’ 2020 elections — where could it go next?

Cointelegraph takes a look at five factors that could influence BTC price action in the week ahead.

US macro: Elections vs. stimulus

The U.S. is the firm focal point when it comes to macro markets this week. The Nov. 3 elections promise to set the mood as it becomes more apparent which side will control the White House.

Analysts have warned that a Democrat win would dent the dollar, the long-term prospects for which are already shaky. Donald Trump’s reelection, however, would not be enough to keep the greenback out of danger, Goldman Sachs said last week.

By extension, calls are coming for safe-haven gold to make serious progress upwards after November — regardless of the election outcome. For others, however, it is Bitcoin that will profit more impressively.

The dollar’s strength remains on the radar of Bitcoiners thanks to the inverse correlation between BTC/USD and the U.S. dollar currency index (DXY). Despite this correlation becoming less apparent in recent weeks, a sudden weakening of USD has the potential to be a boon for the largest cryptocurrency. 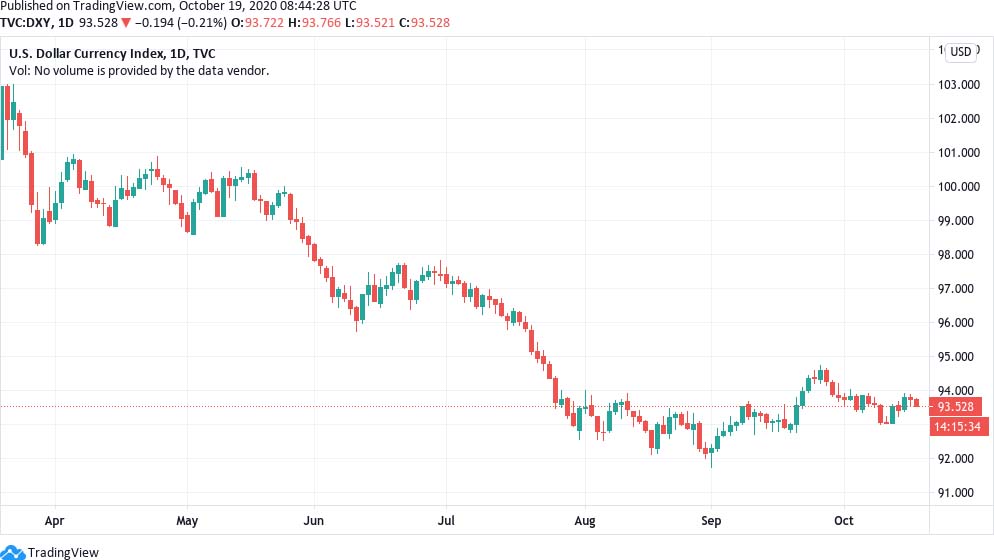 Not only elections, meanwhile, but what comes before is a topic of interest. Specifically, fresh hints have come over a Coronavirus stimulus deal being done before polling day.

Should this occur, several trillion dollars of liquidity will add to the burgeoning U.S. debt pile, with Americans seeing perks such as another $1,200 stimulus check.

In Europe, the picture revolves around the European Central Bank’s (ECB) own response to the Coronavirus, which continues to tighten its grip across the continent.

Speaking to French newspaper Le Monde on Monday, ECB president Christine Lagarde said that more financial tools were left to be deployed to support the eurozone if necessary. In addition, the ECB’s $878 billion recovery fund should become a permanent feature.

“The options in our toolbox have not been exhausted,” she said.

“If more has to be done, we will do more. On taking up my position, I was told that there was nothing left for me to do, that everything had been done. But that was clearly not the case!”

The potential for instability in the eurozone is compounded by Brexit, which is increasingly heading towards the “no deal” walk out of the bloc by the United Kingdom.

When prime minister Boris Johnson announced the likely outcome of the process last week, however, markets barely reacted to the news.

Bitcoin stayed practically rangebound over the weekend, with only a brief spike above $11,500 contrasting the flat activity.

Despite this, on a technical level, signs of record strength continue pouring in this month. The difficulty, which provides an estimate of miner competition and network security, is now back at all-time highs.

Two days ago, the latest readjustment saw difficulty increase by a larger-than-expected 3.5%.

At the same time, the hash rate also climbed to a new average all-time high on Monday. At press time, the estimated computing power dedicated to mining stood at 146 exahashes per second (EH/s).

As Cointelegraph often reports, the popular theory that price follows hash rate remains firmly in force as miners are more bullish than ever on Bitcoin as a long-term investment prospect. 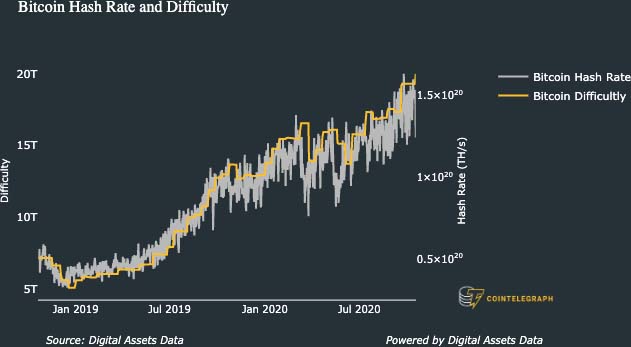 In his latest video update on Sunday, he highlighted that several years of weekly closes below the significant resistance level of $12,000 should soon come to an end.

Since the start of the bear market in early 2018, $12,000 has formed a rejection point for the weekly chart, but consolidation below cannot last forever, Van de Poppe argued.

“It’s very likely that we’re going to make a rally towards the area of $16,000 to $17,000 as that’s the obvious level and the final hurdle for Bitcoin to start breaking all-time highs,” he summarized.

Such a move would be followed by another consolidation period which could well be longer in duration than the current one. Nonetheless, if a bull market materializes, it will be Bitcoin-fuelled.

“The main driver of the next bull market will still be Bitcoin,” Van de Poppe added, recommending that viewers make an effort to accumulate BTC even in the $16,000 range.

Greed is back on the menu

In line with gradually increasing price strength comes investors sentiment, which according to one indicator is getting greedier.

In its latest market reading, the Crypto Fear & Greed Index is back in “greed” territory, having edged up from “neutral” over the past week.

This suggests that sentiment among Bitcoin investors is anticipating a bullish advance, but there’s a caveat — if price increases too fast, “greed” will become “extreme greed,” under which circumstances the Index says a correction is much more likely.