Bitcoin is holding up following a strong bounce from $30,000 support.

Cryptocurrencies were mostly higher on Thursday as bullish sentiment returns. Bitcoin was trading around $32,300 at press time and is up about 1% over the past week. The price recovery off $30,000 support stalled following positive comments from Tesla’s CEO Elon Musk on Wednesday. Technicals suggest upside is limited around $34,000 resistance.

Lukas Conrad, chief product officer at Bitpanda, an Austrian financial services platform, described the trading environment across cryptocurrencies as a “roller coaster ride,” in an email to CoinDesk.

“The price of Bitcoin has been producing lower highs and lower lows recently while remaining in a downtrend,” Conrad wrote. “Even though pressure from sellers might be diminishing, buyers won’t turn things around until resistance is broken.”

Bitcoin was already well bid ahead of The B Word conference on Wednesday. And now analysts are questioning whether Musk’s comments are enough to keep bitcoin bulls active.

“The jury is still out on whether this positive spark will bring enough confidence to change the direction of the markets,” wrote Ulrik Lykke, executive director of crypto hedge fund ARK36, in an email to CoinDesk.

“Investors should still be attentive to the risk and realize that this may indeed not be enough to bend the current downwards momentum,” Lykke wrote.

Short-term holders who are underwater (holding bitcoin significantly below the acquisition cost) are in capitulation mode, according to data from Glassnode.

The chart below shows the short-term holder market value to realized value (MVRV) ratio, which is at the lowest level since January 2020. In a bearish price trend, a low MVRV ratio is typically aligned with capitulation events, according to Glassnode. 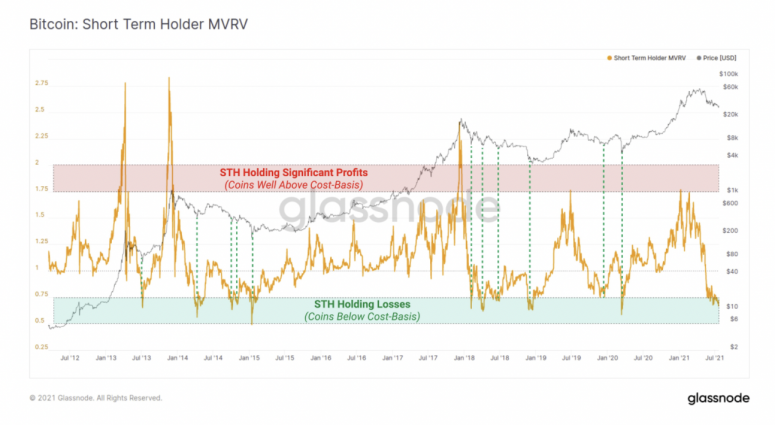 It is possible that bitcoin is seen as a safe haven as altcoins experience sharper selloffs during bear markets similar to 2018. 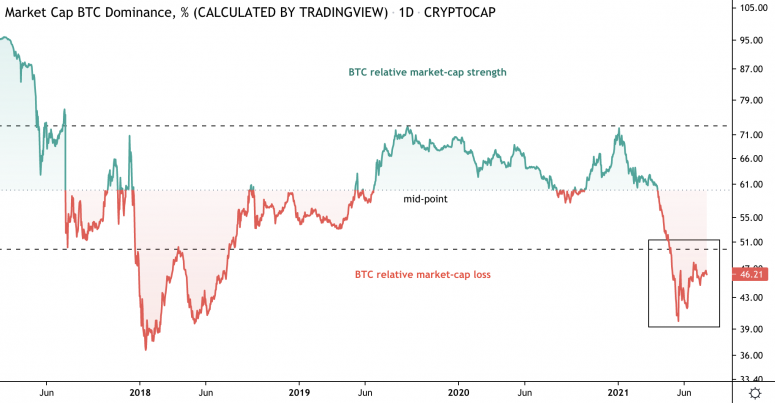 Ether has been consolidating relative to bitcoin over the past two months. The ETH/BTC ratio could see a short-term breakout, especially if ether holds above the $2,000 level. 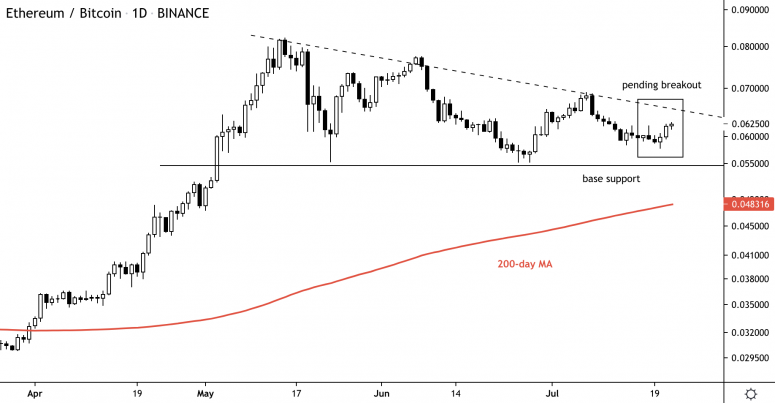 Stablecoins in the spotlight

Financial regulators need to consider “the worst case scenario, the adverse scenario and the different likelihoods of those scenarios, and then assessing risk” when regulating stablecoins, Dan Burstein, general counsel and Chief Compliance Officer of Paxos, said in a TV interview at CoinDesk’s First Mover.

The worst-case scenario would be a run on assets, according to Burstein. “If those assets are held in illiquid assets, or risky assets, then those might not be able to be sold for $1. And those tokens are then going to be under reserved, they’re going to break the buck, and they’re not really entitled to the name of stablecoins.”

Reddit chooses Arbitrum: Arbitrum has been selected by Reddit to make the social media site’s Ethereum-based Community Points system ready for prime time. Rollups, a solution for the world computer’s limited capacity, temporarily bundle transactions on a sidechain so that more users can participate in the primary network. Reddit said Thursday that Arbitrum beat out 21 other entrants to become the winner of its “Scaling Bake-Off.” Other projects being considered included Solana, StarkWare and Polygon, to name a few.

Ethereum-based authentication platform raises $27M: Magic, an Ethereum-based authentication platform that allows users to log into websites without relying on passwords or the centralized honeypots that store vast lists of them, has closed a $27 million funding round. The Series A round, announced Thursday, was led by Northzone and included Tiger Global, Volt Capital, CoinFund and Digital Currency Group (also the owner of CoinDesk). It brings Magic’s total funding to $31 million, following a $4 million seed round in May 2020 that included the likes of Placeholder, SV Angel and Naval Ravikant.

Most digital assets on CoinDesk 20 ended up higher on Thursday. In fact everything was in the green except for dollar-linked stablecoins.