ApeCoin price is undergoing a retracement after the massive run-up triggered on April 18. This move is likely going to allow bulls to recuperate for the next leg that will shatter through the current ceiling and set a new all-time high.

The extremely optimistic outlook makes sense considering the rumor mill that has been churning since April 20. The talk of the crypto twitter is that APE tokens will be a medium through which holders can purchase land in a metaverse that is being launched by YugaLabs, the owner of the popular Bored Ape Yacht club.

Was just sent some huge alpha re @yugalabs land drop. The sale will be a Dutch auction of some sort starting at 600 $APE.

Get your $APE ready. Looks like we’re gonna need it. #BAYC #OTHERSIDE

ApeCoin price readies for next move

ApeCoin price set a swing low at $9.52 after crashing 45% from its all-time high. This downswing set the lower limit and was followed by a 62% run-up that set a local top at $15.53. Since this range was established, APE has been traversing inside it.

On April 18, ApeCoin price kick-started a 62% upswing that pushed it through the previous all-time high at $17.46 and set a new one just above it at $17.53. Since this peak, investors have been booking profits, leading to a retracement.

So far, ApeCoin price has dropped 16% and is likely to continue heading south until it encounters the $13.59 support level. If the buying pressure picks up, it will indicate that the bulls are interested in accumulating APE at a discount.

Therefore, a foothold formation here could be the key to catalyzing the next leg that pushes ApeCoin price beyond the current all-time high and make a run at the $20 psychological level. Using the trend-based Fibonacci extension, the next target at the 100% extension is $22.05. This move from $13.59 to a new all-time high at $22.05 would constitute a 61% gain and is likely where the top will form for APE. 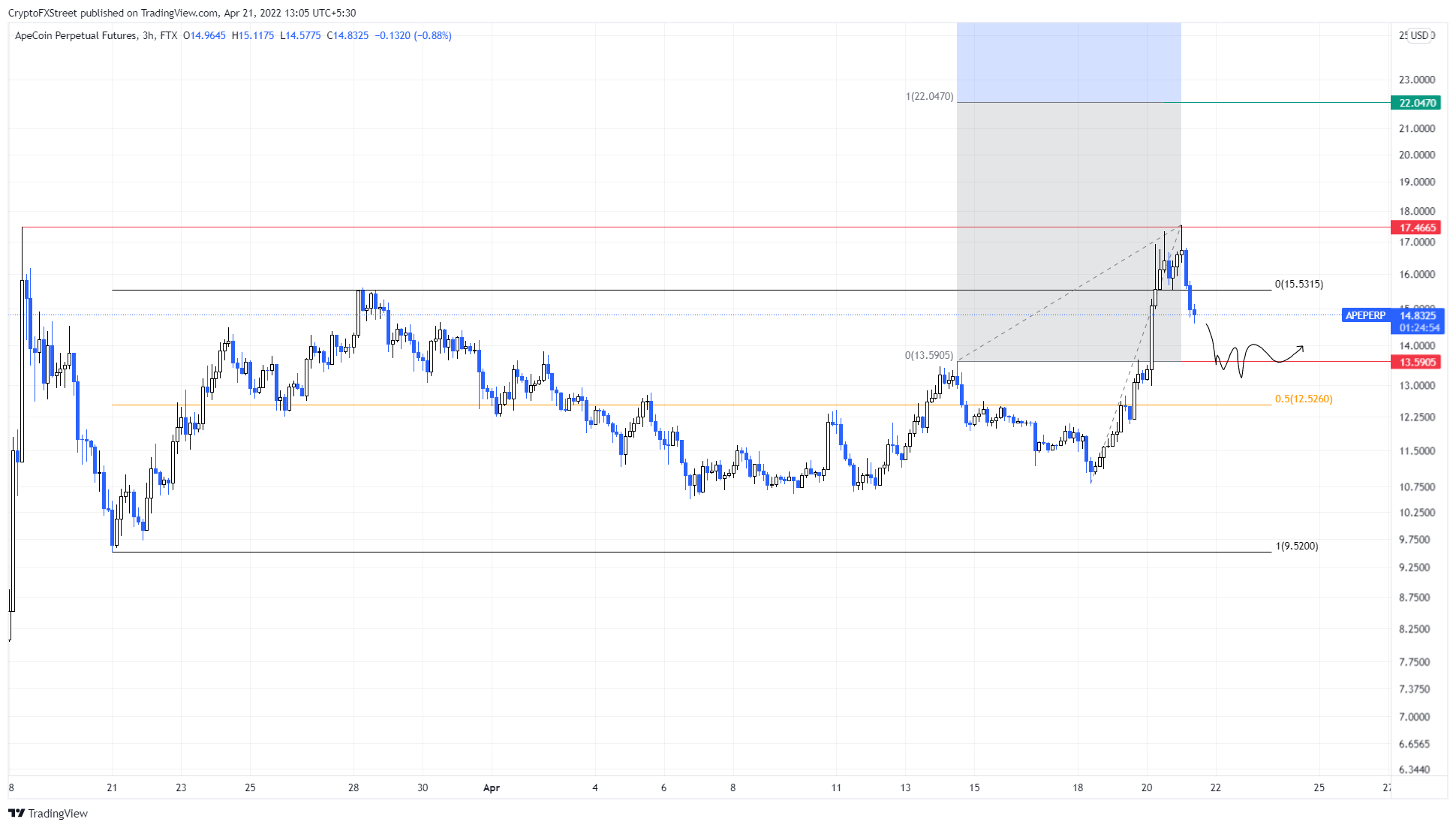 On the other hand, if Bitcoin price continues to descend, there is a good chance ApeCoin price will follow suit. In such a case, APE is likely to slide lower and retest the 50% retracement level at $12.53.

This development will provide sidelined buyers another chance at accumulating the altcoin. However, a  three-hour candlestick close below $12.53 will invalidate the bullish thesis for ApeCoin price and suggest the possibility of a retest of the range low at $9.52.

When it comes to cryptocurrencies, the first spot is fixed for Bitcoin. However, the struggle between the second and the rest of the cryptos continues. This case extends to stablecoins as well since USDC is finding takers even in the most unconventional cases.

XRP price is showing applaudable retaliation signals. Since September 25, the bears have conquered the market, forging a 20% loss in market value for the digital remittance token. Invalidation of the bullish thesis is a breach of $0.31.