Dogecoin price has been in a downtrend since the second week of May and has failed to establish a convincing swing high. However, DOGE price action from April 15 to date shows the formation of a bearish pattern that projects a massive downside.

On-chain metrics point to failing support levels that could flip to resistance, further credence to the bearish thesis.

Dogecoin price is in a multi-month inverse head-and-shoulders pattern. This technical formation contains three distinctive peaks. The one in the middle is typically higher than the other two and forms the “head.” The slightly lower swing highs of equal height create the “shoulders.”

DOGE price sliced through the trend line connecting the swing lows of the peaks, known as the “neckline” on June 15, signaling a breakout.

This setup’s target is obtained by measuring the distance between the head and the neckline and adding it to the breakout point at $0.311, which puts Dogecoin price at $0.137.

Although the meme coin has already crashed 38% since the breakout, the recovery has pushed Dogecoin price closer to the neckline. However, the possibility of a further downswing cannot be ignored, at least from a technical perspective.

Therefore, a potential spike in selling pressure that pushes DOGE to produce a lower low below $0.193 will signal the continuation of the downswing toward the projected target at $0.137. This move would represent a 45% crash from its current position, $0.258. 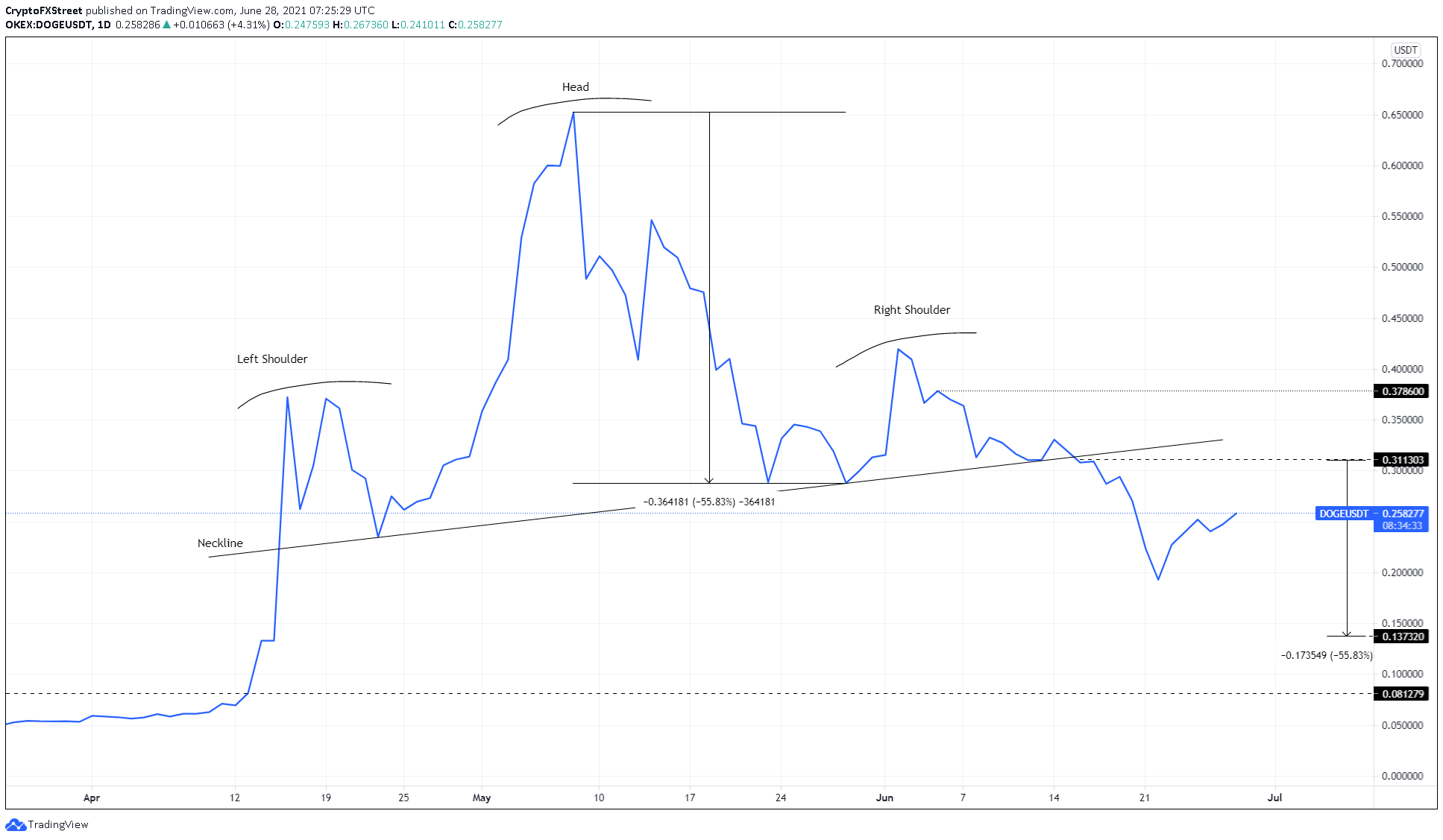 The IntoTheBlock’s Global In/Out of the Money (GIOM) model adds credence to the bearishness displayed from a technical standpoint. This on-chain metric reveals that roughly 124,000 addresses that purchased 8.61 billion DOGE at an average price of $0.261 will be “Out of the Money” if the meme-themed cryptocurrency produces a decisive close below $0.242.

If this were to happen, panicking investors might sell their holdings to break even or prevent an increased loss. Such a move could cascade and exacerbate the sell-off, pushing Dogecoin price to the immediate support cluster at $0.180, where roughly 106,500 addresses hold nearly 13.56 billion DOGE.

Moreover, any short-term buying pressure might face headwinds from the underwater investors present above the current price level.

The bull run that began in 2021 picked up in February, slowed down up to early April, but caught fire in mid-April, pushing many altcoins to new all-time highs. Despite Dogecoin having one of the best performances this bull run, its prospect as a meme coin dwindled.

Perhaps, the main reason for this is the increased meme coins or dog coins like Shiba Inu, Akita, SafeMoon and so on. The new tokens are extremely popular and were relatively less expensive than Dogecoin, which as a group siphoned many retail investors away from DOGE.

With retail shifting to newer meme coins, so did the capital, which might explain the almost zero social volume for Dogecoin.

This metric tracks the number of mentions on Twitter, Telegram, Discord and other platforms. The higher the social volume for an asset, the more investors are talking about it and/or are investing in it. Currently, DOGE’s social volume stands at 121, in contrast to 177 for SHIB and 53 for SAFEMOON, suggesting that buyers are clustered more toward Shiba Inu than Dogecoin.

While one can speculate that this shift might have also triggered capital rotation, it cannot be portrayed with the utmost certainty.

Therefore, if investors continue to book profit, Dogecoin price is likely to create a lower low below the recent swing low at $0.193. If this were to occur, market participants could expect DOGE to continue its descent to $0.137, the target projected by the inverse head-and-shoulders pattern.

On the other hand, if the bid orders continue to pile up, pushing Dogecoin price to produce a decisive close above the neckline at $0.311, it will invalidate the bearish scenario while signifying the bulls’ strength and indicating the willingness to move higher.