Prices: Bitcoin recovers somewhat; most other cryptos are in the green.

Insights: KuCoin will use part of its $150 million capital raise to increase DeFi activity on its blockchain.

Technician's take: BTC appears oversold, although trading conditions have been choppy over the past few days.

As improvement goes, bitcoin didn't have much about which to crow on Thursday. The largest cryptocurrency was still struggling to remain above $30,000, and well off where it was trading as little as two weeks ago.

But the largest cryptocurrency by market capitalization did a little better than ether and other major altcoins.

Bitcoin was recently changing hands at around $30,200, up more than 4.4% over the past 24 hours. The increase outperformed ether, which rose a little more than 3.5% during the same period, and other cryptos, most of which also registered smaller gains as investors continued to prefer the best-known digital asset over smaller, riskier ones. XRP, SOL, ADA and MATIC rose less than a percentage point. AVAX was among the losers, recently dropping more than 3%.

Still, the flavor of the market remained sour with investors continuing to chew on the triple whammy of inflationary pressures, central bank missteps and the looming prospect of recession. Altcoins have largely trailed bitcoin amid the mushrooming economic uncertainty in recent months. For the past 90 days, only 15% of the top 50 altcoins have outperformed bitcoin, according to the Blockchain Center, a provider of crypto data. The trend reflects the current risk-off environment.

Equity markets? They fared a little worse than cryptos but improved on their previous day's bloodbath. The S&P 500 fell by less than a percentage point after finishing Wednesday with its largest percentage decline since June 2020. The index's 18% tumble from its most recent high remains perilously close to the 20% drop that merits bear market designation. The tech-heavy Nasdaq, which reached bear market status earlier this year, fell slightly on Thursday.

"Results from Walmart and Target this week have brought into sharp focus the plight facing companies and consumers as inflation begins to bite," Oanda Senior Market Analyst, U.K. & EMEA, Craig Erlam wrote in an email. "Inflation is catching up and profit margins are taking a hit. Soon enough, though, those higher costs will be passed on and consumers will start being more careful with their spending. There's a feeling of inevitability about the economy, the question is whether we're going to see a slowdown or a recession."

Yet Erlam struck a positive note about bitcoin remaining at the $30,000 level. Bitcoin is holding up surprisingly well against the backdrop of pessimism in the markets," Erlam wrote. "Perhaps because it's fueled by economic concern rather than simply interest rates."

He added: "Whether it can continue to swim against the sentiment tide, time will tell."

“We know the difficulties and obstacles that developer teams have in their initial stage of development,” a spokesperson for KuCoin said. “Therefore, we will devote more resources to discovering and supporting high-quality developers and early innovative projects.”

KuCoin did not provide the exact figures it would use to encourage developer growth. However, KCC will move to a cross-chain model that supports applications from multiple blockchains and build a layer 2 system that allows for faster transactions at a lower fee. Layer 2 refers to a secondary protocol built on top of an existing network

Funding development efforts could help bolster falling demand for KCC. Data from explorers show Thursday saw just 19,000 transactions on the network compared to over 60,000 in early May. 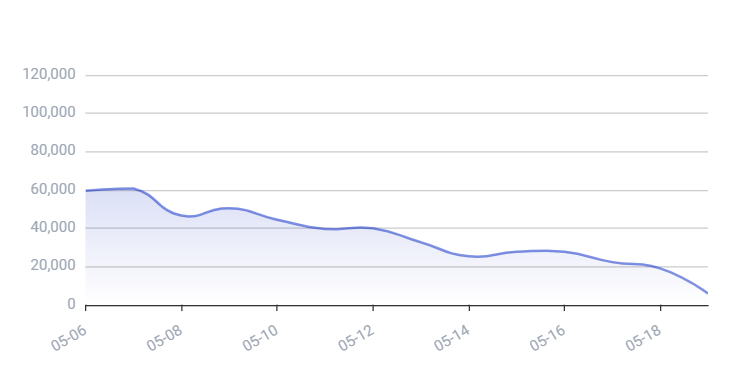 The move is similar to developer funds raised by the likes of crypto projects Fantom, Near and Avalanche in the past year to encourage activity on their blockchain and the building of newer decentralized applications (dapps). Fantom committed $315 million, Near raised $350 million, while Avalanche launched a $220 million "crypto growth" fund.

KuCoin is the fifth-largest crypto exchange by trading volume, CoinGecko data shows. The firm saw a 1,503% year-over-year growth in new users from Asia, who made up a large part of its daily trading volume.

The exchange raised $150 million earlier this month at a valuation of $10 billion in a round led by Jump Crypto.

Bitcoin (BTC) held short-term support above $27,500 as buyers reacted to oversold conditions on the charts. The cryptocurrency could face resistance at $35,000, which is where the current downtrend accelerated earlier this month.

The relative strength index (RSI) on the daily chart is rising from oversold levels, which could keep short-term buyers active. Further, short-term momentum is improving, similar to what occurred in early March, which preceded a brief relief rally in price.

A countertrend reversal signal, per the DeMARK indicators, appeared on BTC's daily chart on May 12 alongside major equity indices. That suggests a relief rally in speculative assets could delay additional breakdowns in price.

Still, BTC will need to register a weekly close above $30,000 (and above 4,000 for the S&P 500) to confirm short-term bullish signals. For now, upside appears to be limited because of negative momentum signals on the weekly and monthly charts.

Veecon conference around Web 3 and culture