Filecoin has been gaining ground rapidly since the weekend. The token has recovered from as low as $20.63 to $40.8 in less than three days amid significant buying interest in China. At the time of writing, FIL/USD is changing hands at $38.3. Despite the retreat from the recent high, the coin is still 15% higher on a day-to-day basis. As compared to the previous Monday, October 19, FIL's price has increased by over 23%.

Notably, during the weekend, Filecoin was one of the worst-performing coins with double-digit losses amid miners exodus from the network; however, the luck smiled on it.

Currently, Filecoin takes 21st place in the global cryptocurrency market rating with a current market capitalization of $821 million and an average daily trading volume of $329 million. The coin is most actively traded on Binance and Huobi against USDT.

Filecoin faced lots of issues with miners after the launch of its main-net on October 15. The participants complained about the unsustainable economic model. Many miners were forced to throw in the towel as they could not reach full capacity without having lots of FIL coins at the start.

To address the issues and support miners at the initial stages, the project team launched a new loan program. According to Colin Wu, a Chinese cryptocurrency reporter, the new lending mechanisms helped stop the miners' exodus. Many people locked their positions and reduce selling pressure on the FIL.

The Filecoin boom in China is still going on, and today it has surpassed $40. The core reason may be the perfection of the lending mechanism, which has caused many people to lock their positions and reduce selling pressure. pic.twitter.com/UqonSaYIum

The expert also noted that the team held an event in Shanghai, which might have also attracted attention to the coin. However, the sustainability of the rally is under question as the long-term perspectives are still clouded. Miners will start disposing of their coins to cover the equipment's expenses, meaning that the selling pressure will eventually increase.

FIL/USD: Bulls taking a break below $40

From the technical perspective, FIL/USD is moving inside the channel limited by the recent high of $40 on the upside and the local support of $34.4. This barrier is reinforced by the short term EMA located on approach. Notably, this support served as a backstop during the correction on Sunday.

A sustainable move below $34.4 will increase the selling pressure and bring $30 into focus. It served as channel support for the price on October 19-21, before the new bearish wave took the price to the historic low of $20.63. 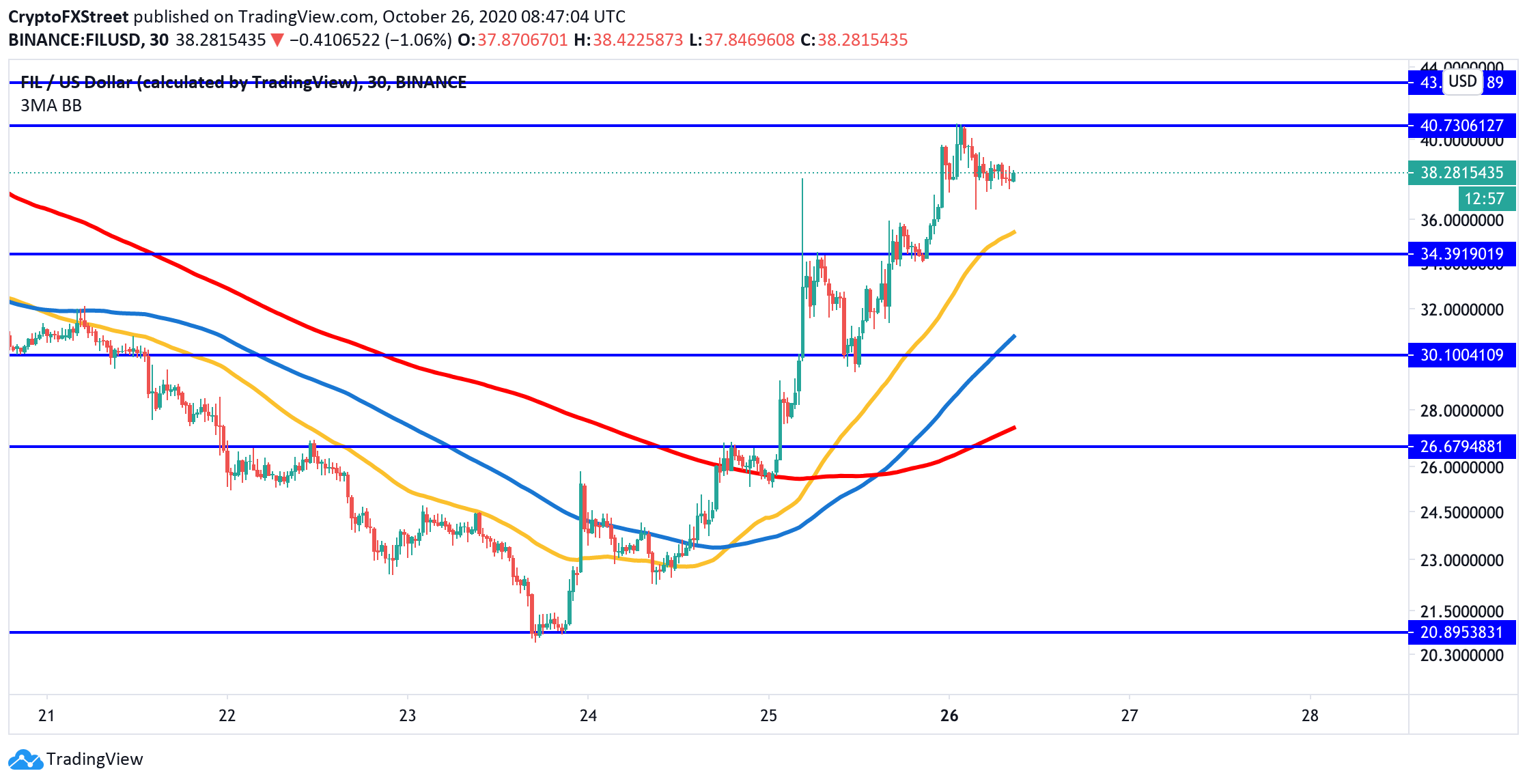 On the upside, once $40 is out of the way, the upside is likely to gain traction and take the price to the next resistance of $43 and a psychological $50.

While FIL remains bullish as long as the price stays above $34.4, long-term growth looks unlikely at this stage due to the clouded fundamentals. On the other hand, a sustainable move above $40 will improve the short-term technical picture and allow for an extended recovery towards $50.