Bitcoin (BTC) price suffered a fatal fall due to the implosion of the cryptocurrency exchange FTX. As a result, the crypto market took a tumble, leaving the exchange to file for bankruptcy on November 11.

The untimely collapse of the FTX exchange caused many investors, retail and institutions heavy losses as their funds are still stuck in the exchange. To make matters worse, there was a hack soon after the bankruptcy was filed, worsening the already grim situation.

The bankruptcy hearing is taking place in a federal court in Delaware. Representing FTX at this hearing is James Bromley, a partner at the law firm Sullivan & Cromwell, who stated a “substantial amount of assets have either been stolen or are missing.”

The US Securities and Exchange Commission (SEC) is currently investigating the founder Sam Bankman-Fried’s actions as the executive of FTX.

FTX was in the control of inexperienced and unsophisticated individuals, and some or all of them were compromised individuals.

The now-defunct FTX exchange had roughly $600 million in assets stolen by an exploiter. As this hacker started offloading his funds, the market reacted to it, triggering another sell-off.

Bitcoin price crashed roughly 6% between November 19 and 22 as a result of the low liquidity during the weekends.

However, as the new week began, Bitcoin bulls seemed to have come out of hiding, denoting a sudden shift in market sentiment.

Bitcoin price shows a strong recovery after sweeping below the November 10 swing lows at $15,558 on November 22. This sell-stop liquidity run convinced market makers to trigger a buying spree, which was also a good place for sidelined buyers to step in. As a result, BTC kick-started a 7% upswing.

There are a few levels that investors need to be cautious about.

To undo the 27% crash caused as a result of the FTX crash, Bitcoin price needs to flip the $17,593 hurdle into a support floor. However, that is a mid-to-long-term picture. The short-term outlook suggests that the upside for BTC is capped at $17,593.

So, traders looking to open long positions can do so after a retest of the previous weekly open at $16,331. For a successful bullish move, Bitcoin price needs to slice through the declining trend line connecting the string of lower highs formed since November 11. After this, the big crypto needs to flip the POC at $16,716.

As seen in the volume profile indicator, there is a high volume node in this area, making it a tough level to crack. Therefore, buyers need to come together to overcome this blockade. A four-hour candlestick close above $16,716 followed by a spike in buying pressure could trigger a Bitcoin price run-up that shatters through the previous Monday’s high at $17,190 and tags the June lows at $17,593.

For swing traders, the flip of $17,593 into a support level is critical. Doing this opens up the path to $19,011, which is the highest volume traded for the last eleven months. Beyond this level, the volume profile shows a small cluster of high-volume nodes at $19,715. Traders can book profits around this level or wait for a retest of the $20,000 psychological level. 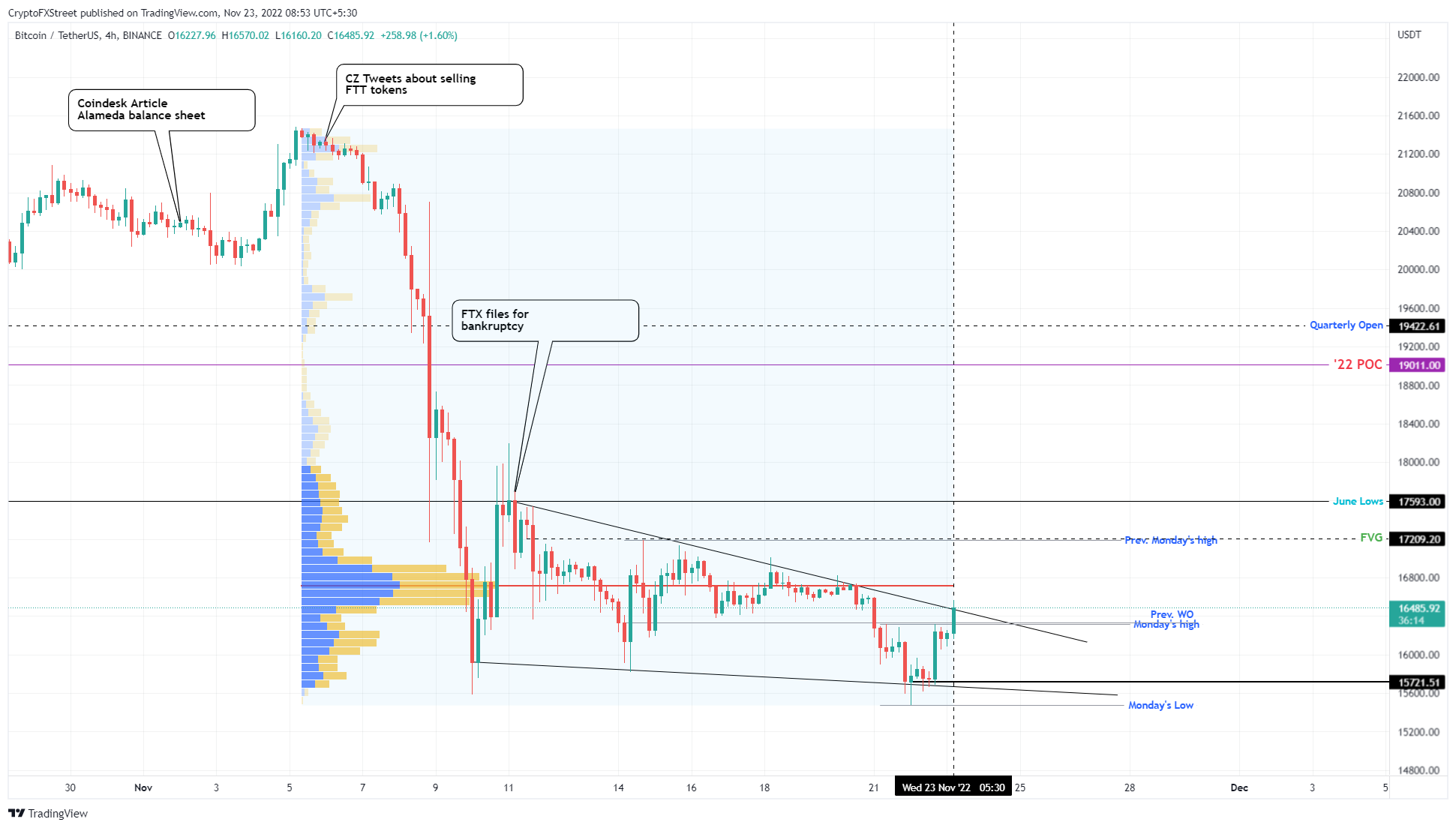 While the outlook for Bitcoin price is bullish after the recent recovery rally, investors should not get ahead of themselves. A breakdown of the $16,331 support level will signal weakness among buyers or exhaustion.

If this move is followed up with a decisive flip of the $15,721 support level into a resistance barrier, it will invalidate the bullish thesis for BTC. In such a case, Bitcoin price could crash 5% to tag the $15,000 psychological level.