It’s possible that the world is waking up to the onerous energy demands involved in supporting Bitcoin and other cryptocurrencies, but perhaps not soon enough.

I’m sure I’m not alone in feeling like this energy aspect of cryptocurrencies developed out of nowhere. When Bitcoin just got started, the associated energy usage was trivial; but these days, the energy requirements are massive. One comparison suggests that Bitcoin requires using more energy than it takes to handle a third of the energy required for residential cooling in the entire US. At that level of use, you can be sure that cryptocurrencies have pushed energy prices higher for all of us, to say nothing about what cryptocurrency markets are doing to the environment.

Contrary to the claims of proponents who see digital currencies as replacing the dollar and other traditional currencies as the preferred medium of exchange, the extreme volatility that these cryptocurrencies have exhibited challenges that claim. That volatility makes them unsuitable for anything other than financing illegal or illicit activity. Nevertheless, the promise of the bigger fool — i.e., the idea that you can buy a Bitcoin and someone else will be ready to pay you an even higher price — has fueled the growth of these markets.

If you believe the promoters, you should buy cryptocurrencies. The price is only going to go up, seemingly without limit. As dumb as that pitch sounds to me, it has hit a nerve. Countless people — literally countless since our oversight of these markets is next to nonexistent — have bought into this nonsense to the point that traditional financial institutions are now setting up ways to capitalize on these customers’ desires. Critically, I don’t see these institutions moving to hold significant volumes of cryptocurrencies in their portfolios. Rather, they’re just figuring out ways that they can earn fee income off the suckers who’ve fallen for the hype. It may not be immoral, but it is amoral.

Besides exchanges cropping up every day (ZDNet lists 43 separate cryptocurrency exchanges), you can expect to see a proliferation of Managed Cryptocurrency Accounts offered at a host of “respectable” institutions — all in the spirit of giving the people what they want, while at the same time serving to abet illegal and illicit transactions. Too many smart minds are finding highly paid employment working in these various support functions; and, unfortunately, in doing so, they’re adding to a false patina of respectability for cryptocurrencies, generally.

There’s nothing respectable about contributing to the success of these markets. They’re a drain on energy, a drain on human capital, and, at some point, I’m quite sure they’ll end up causing a great many people to suffer financially — not the creators of these instruments, though, that’s for sure. These charlatans will make out just fine even if these markets ultimately go down the toilet. Presumably they’ll just move on to the next generation of snake oil.

In my last posting, I advocated shutting these markets down, but I’m afraid we’ve probably gotten beyond the point of no return. Cryptocurrency interests are growing daily, and they’re not likely to fade quietly into the night. Even if we can’t shut them down altogether, however, we should still move to restrict the cryptocurrency footprint sharply.

Between the SEC and the CFTC, our financial regulators are certainly capable of doing this. At a minimum, these agencies should be able to know who holds cryptocurrencies, and how much they hold; and cryptocurrency speculators should satisfy strict eligibility standards. By way of comparison, a “qualified eligible person” is defined by the CFTC as one who has a net worth of more than $1 million or has earned more than $200,000 (or $300,000 with a spouse) in each of the last two years. This status is a requirement for participation in many hedge funds. Beyond these financial requirements, the Energy Department should also get in on the act. Entities that want to use energy for the purposes of cryptocurrency mining should be forced to pay an energy surcharge.

The fact that money can be made with cryptocurrencies shouldn’t overshadow their deleterious effects, with energy usage being high on the list. I’d venture to say, though, that most of those who feel strongly about climate change are ignorant about the connection between these concerns and cryptocurrencies. The connection is real, however, and citizens concerned about climate issues need to participate in discussions about regulatory oversight of cryptocurrency markets. The future of cryptocurrencies has broader significance than simply their place in the financial landscape. Environmental concerns deserve to be considered, as well — possibly overriding all other interests. 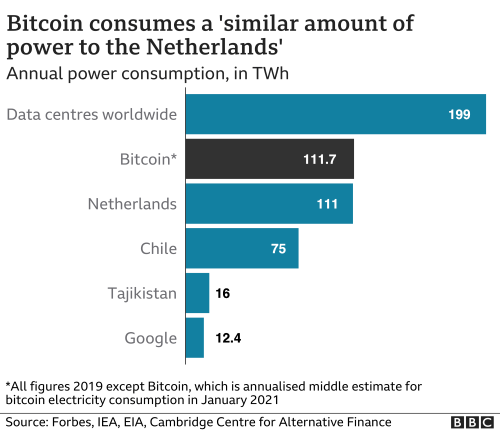