Open-source cryptocurrency wallet Breadwallet (BRD) has recently been acquired by leading digital asset exchange Coinbase. BRD will join the Nasdaq-listed firm and users of the wallet will be given the option to migrate to Coinbase in 2022.

Breadwallet recently announced its acquisition by Coinbase in a blog post, stating that the move will bring decentralization to more users around the world. In the near future, BRD wallet users will be given the option to use a migrational path to self custody with Coinbase Wallet, with a special gift included.

The cryptocurrency wallet was launched as an application in 2014, focusing on providing digital asset custody and making it more accessible to users globally. Breadwallet grants additional features for holding its native utility token BRD in their wallets.

Breadwallet serves over 10 million users, and BRD CEO Adam Traidman stated that “nothing will change in the BRD wallet app,” adding that funds remain safe and secure.

The crypto wallet team said that some of the company’s team members will be moving to the Nasdaq-listed firm to continue on development work for digital asset wallets. Coinbase Wallet tweeted that the BRD team will “help accelerate web3 adoption.”

Following the reveal of the Coinbase acquisition, BRD token price surged over 700%, reaching a swing high at $1.69.

BRD price rallied 725% on November 24, fueled by bullish sentiment following the acquisition announcement. Although the news acted as a catalyst for the token, the weekly chart suggested that an optimistic target was already in the offing.

BRD price formed an inverse head-and-shoulders pattern on the weekly chart, with a bullish target of a 91% climb from its neckline. The token has already exceeded the optimistic forecast, and is now aiming for the 127.2% Fibonacci retracement level at $2.20. 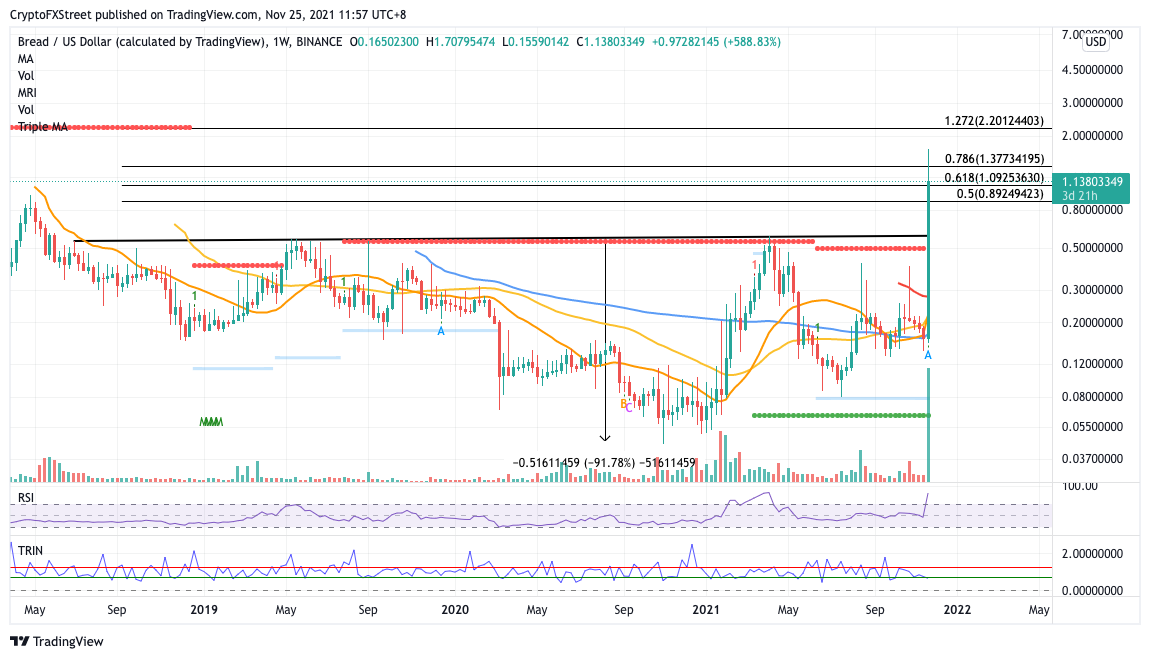