Cardano price climbed 270% in February on the highest monthly volume total since the digital coin inception in 2017. The correction process through March and early April has formed a pennant continuation pattern that includes two weekly dojis. The price contraction combined with the balance between buyers and sellers has put ADA in a timely position for a breakout to the upside.

Cardano price at an inflection point for the longer trend

Pennant patterns are frequent with quick and reliable outcomes. Prices tend to rally immediately with few throwbacks or pullbacks and have a very low failure rate. Pennants follow sharp price moves and often move horizontally to the preceding rally. A contraction in volume usually complements this.

Dojis are single candlestick patterns that demonstrate an equilibrium between buyers and sellers. A period of indecision, often waiting for a catalyst to trigger the breakout. When combined with the pennant’s contracting price action, this type of candlestick puts ADA in a rare but timely position for a significant rally. Moreover, the arriving support of the 10-week SMA only raises the odds of an upside breakout.

The measured move target for the ‘Ethereum killer’ is based on the February rally and is at $5.25, representing a 270% gain from the pennant breakout price. It comes close to the 3.618 extension level at $5.50.

To embrace the bullish spirit and since ADA is trying to breakout from a multi-year base, it is appropriate to consider the 1.382 extension of the 2018-2020 bear market at $7.55. 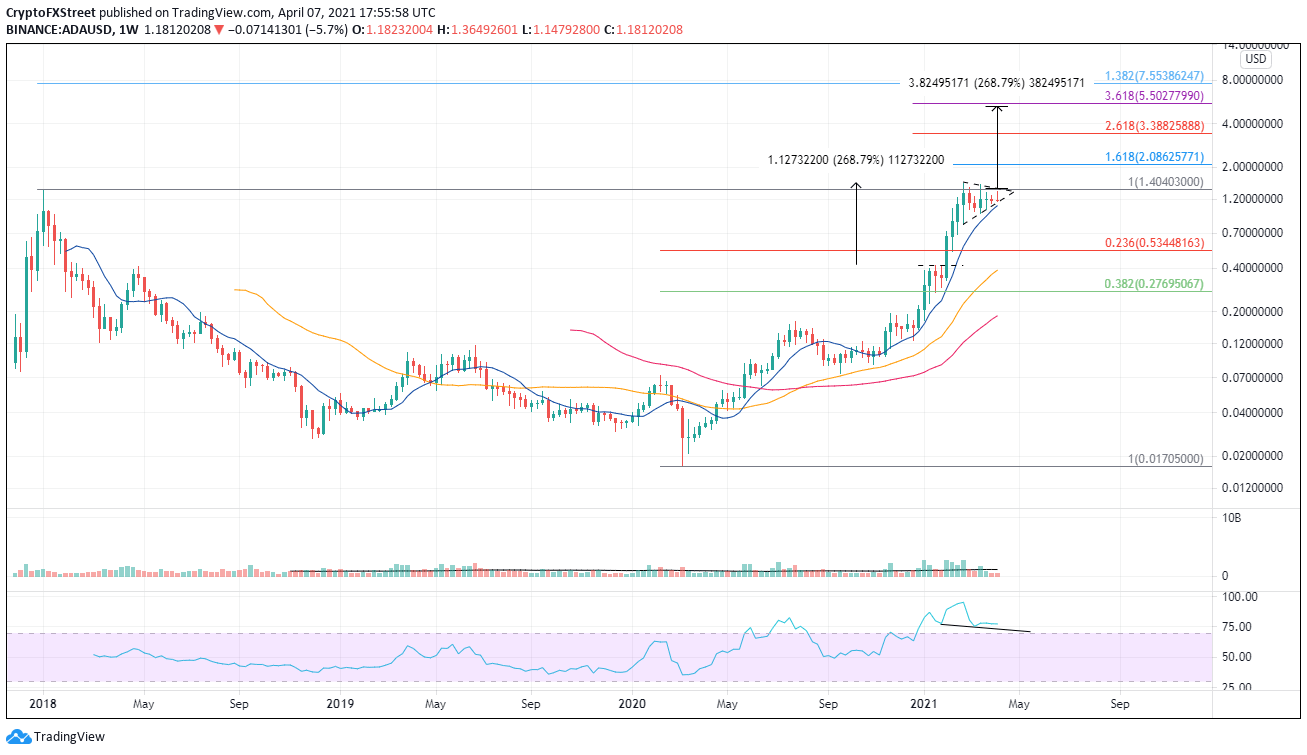 Consistent with the balance between buyers and sellers, the IntoTheBlock’s In/Out of the Money Around Price (IOMAP) data shows a slightly more out of the money volume at the moment. It could provide some resistance, but support will be abundant between $1.12 to $1.15, which correlates with the pennant formation’s lower trendline.

All patterns carry the risk of failure, so traders need to watch the lower trendline and the 10-week SMA for heavy support. A weekly close below the evident support does expose ADA to a significant decline that may not pause until the 0.236 retracement of the 2020-2021 bull market at $0.53.

In summary, the breakout direction should be expected in the direction of the preceding trend, particularly considering the steepness and the power. As such, these probabilities favor a bullish resolution in the coming days.

Elrond has benefited from an impressive run since the beginning of April, gaining 77% to reach a new all-time high of $245.8. After this huge rally, the digital asset seems bound for a short-term correction.

MATIC has experienced a significant rally over the past two days, and although most on-chain metrics suggest the digital asset is poised for further gains, there is one key indicator that shows Polygon might need to see a correction first.

The topic of Dogecoin seems to have resurfaced among celebrities, triggering a frenzy among investors and pushing the DOGE price higher.

Theta price is consolidating in a bullish pennant formed due to a significant spike in price followed by a consolidation in the form of a pennant.