Cardano price has retraced by roughly 30% after the February 27 peak of $1.48. Now, ADA could be preparing to bounce off a crucial support level as institutional investors gain exposure to this cryptocurrency.

ADA makes it to the Bloomberg terminal

Bloomberg announced that it will add ADA to its terminal giving institutional investors exposure to the peer-reviewed blockchain project. However, the listing is only using the definition, not the price information.

The announcement has not proved to be a positive catalyst for Cardano price today, but it is a step in the right direction for the altcoin.

It comes just days after Galaxy Digital CEO Mike Novogratz asked his Twitter followers to make a bullish case to own ADA.

With a more extensive institutional following generated by the Bloomberg listing, the answer for some investors may now be more bullish.

Cardano price correction is almost over

As Bitcoin and Ethereum print new all-time highs, Cardano price has continued to drift lower in a three-week declining wedge, a classic consolidation within the prevailing trend. The volume profile during the correction has been well below average, supporting the bullish thesis.

A bullish resolution to the formation will first find some resistance at the upper trendline, currently at $1.12, followed by the 50 four-hour simple moving average (SMA) and 100 SMA.

A notable point of resistance emerges around $1.20, an area of price congestion going back to February 20. A breakout from there will put Cardano price on the path to test the all-time high at $1.49 in the coming weeks. 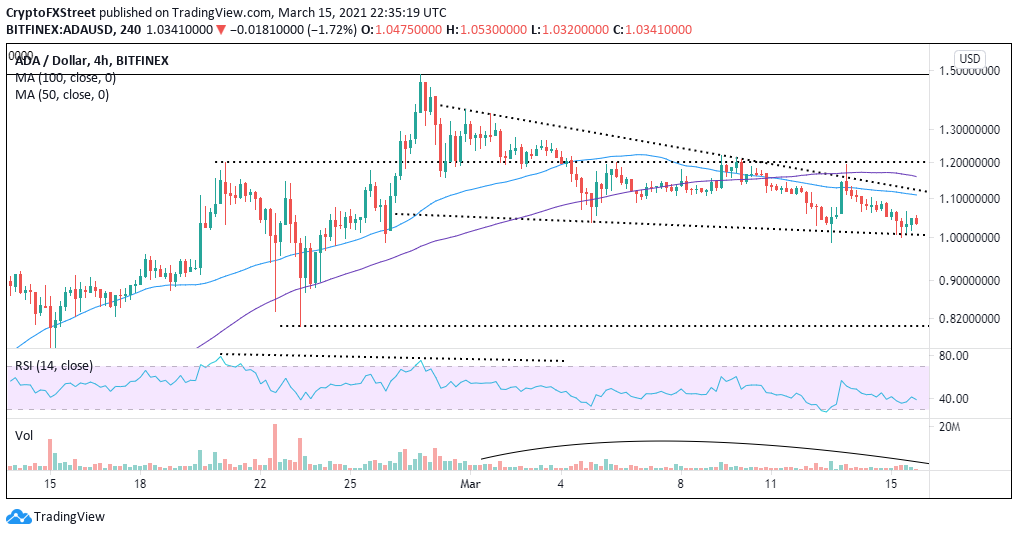 If the pattern resolves to the downside, the first significant support is at the 50-day SMA ($0.87), but the most critical support is the February 23 low at $0.84.

A failure to hold firm would signal that ADA is in the early stages of a much larger decline.

SafeMoon Price Prediction: SAFEMOON has one last chance for 65% rally

SafeMoon price experienced a massive sell-off that has pushed it to slice through major support levels, jeopardizing its ability to move higher. Despite this, SAFEMOON currently sits above the last line of defense.

While the SEC v. Ripple continues to see no end in sight, the blockchain firm is increasingly moving out of the United States. However, Ripple CEO Brad Garlinghouse stated that the firm is not giving up on the US. SEC Chair Gary Gensler believes that ...

Roughly 75% of Ethereum nodes are ready for the upcoming upgrade, the London hard fork. The ETH London upgrade is expected to take place on block 12,965,000, scheduled to occur on August 5. Ethereum price managed to slice above $2,700 for the first time since early June.

MATIC Price Prediction: Polygon awaits a trigger that could propel it 68%

MATIC price has stayed lull after July 26 swing high at $1.137. The sideways movement indicates a build-up of pressure, which could lead to a massive move in either direction. A breakdown of the $0.90 demand barrier will invalidate the bullish thesis.