Cardano price action has been uneventful, despite recovering 33% from its reaction low on June 22 when it dropped to $1.00. ADA has not shown any directional clues, therefore investors can expect the asset to consolidate further before a break out manifests.

Cardano price has struggled to make higher highs since its ADA reached its record high at $2.47 on May 16, allowing a descending trend line to form on the daily chart. Now, the cryptocurrency appears to be consolidating after its attempt to break out.

Cardano sliced through the descending trend line that has trapped ADA in a downward trajectory, suggesting that it is ready to effect the reversal of fortune.

However, Cardano price continues to be sealed under an abundance of resistance levels, as the traction has been momentary, not resulting in a sustainable superior rush higher. ADA is quickly retracing to the aforementioned descending resistance level and is losing this barrier at $1.33 as support.

Cardano is currently trading below the 38.2% Fibonacci retracement level at $1.34, which is the first sign of weakness. In addition to the bearish thesis, ADA has not closed above the 50-day Simple Moving Average (SMA) and the 100-day SMA since June 10 and June 18, respectively. 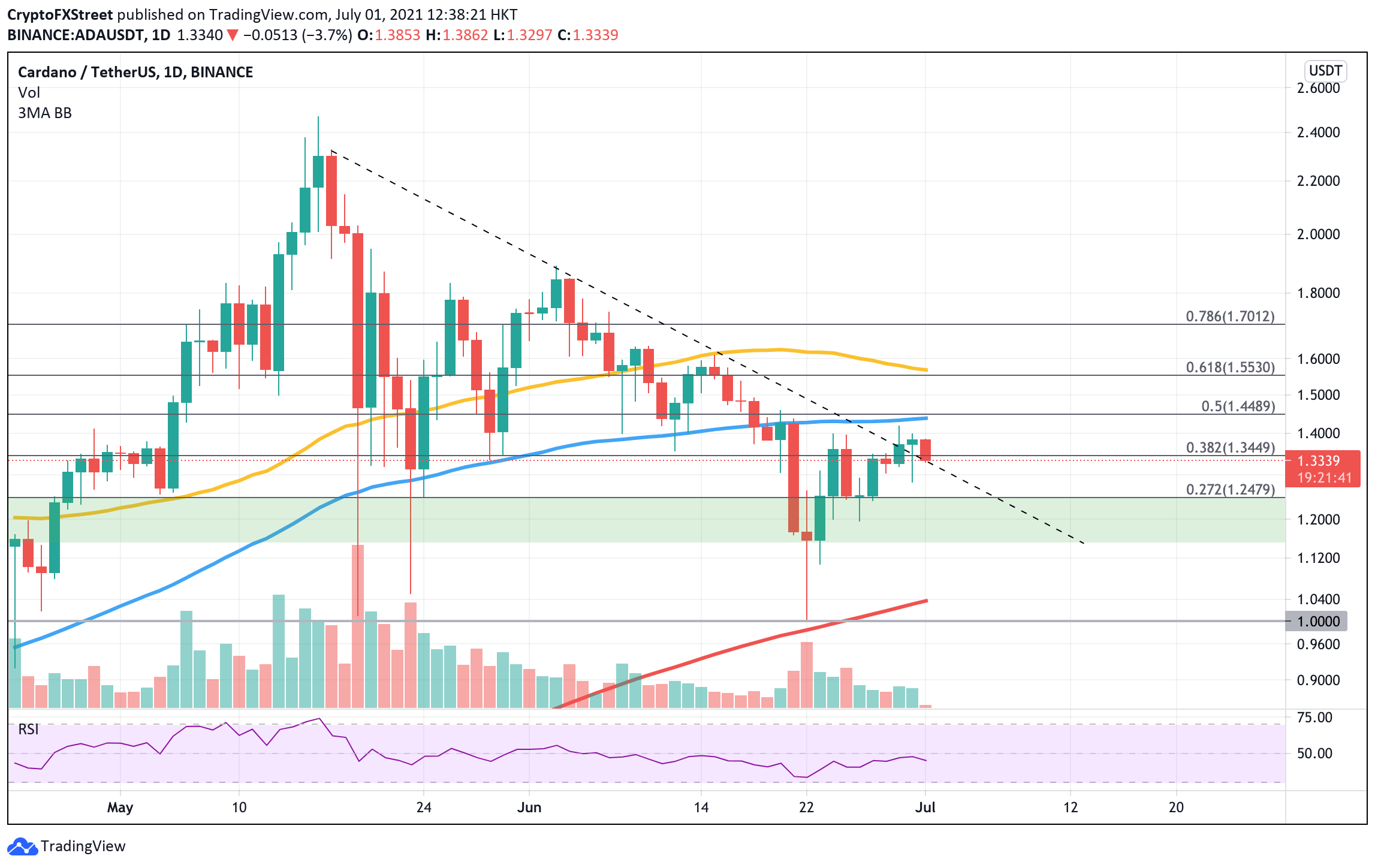 The decline in trading volume along with the price also adds credence to the pessimistic outlook, as ADA bulls are starting to lose steam. Further selling pressure could push Cardano price back to below the descending trend line and down by 6.5% to the demand barrier that starts at $1.25, coinciding with the 27.2% Fibonacci retracement level.

Although the prevailing direction of ADA appears to be sideways, should the bulls lose further momentum to the bears, Cardano price would find its strongest line of defense at the lower boundary of the demand zone at $1.15, before the possibility of retesting $1.00.

On the flip side, if the bulls manage to shift Cardano price action to the upside by closing above $1.34, ADA could be primed for a 7.5% jump to the 100-day SMA at $1.44, which coincides with the 50% Fibonacci extension level.

Speculators must note that this level could act as a strong resistance, and only a daily close above it might open up the potential for a Cardano price to rally by 17% and tag the 50-day SMA and the 61.8% Fibonacci extension level at $1.55.