Cardano (ADA) price action saw massive inflows from bulls on Sunday as they managed to  tear down the bearish wall that short-sellers had built at $1.40. ADA bulls were able to touch the green ascending longer-term trend line vital for any longer-term uptrend in Cardano price. Expect to see $1.67 reached quickly and if markets can provide  a tailwind, for $1.80 or $2.00 to be gained by the end of this week.

This week, the future looks bright for Cardano price action as bulls managed to break through multiple resistance levels that were perceived to be almost impossible to tear down. But  on Sunday bulls  broke the 55-day Simple Moving Average (SMA), the monthly pivot and reentered above the green ascending trend line that will replay its part as the backbone for the uptrend. The move came close to turning into a bull trap, however, as bulls could not close above the green ascending trend line firmly, but a bounce off the 55-day SMA has acted as a launching platform for the stellar reaction ADA is performing this morning during the European session.

Going forward, expect the first fundamental profit level for ADA price to be at $1.67, the monthly R1 resistance level and a longer-term level in the process of being defined. This area will undoubtedly see some profit-taking, but the overall target will be at around $1.90 and just below the 200-day at $1.83. A fade here would make sense, testing the $1.67 support level, before another leg up to $2.00 medium-term. 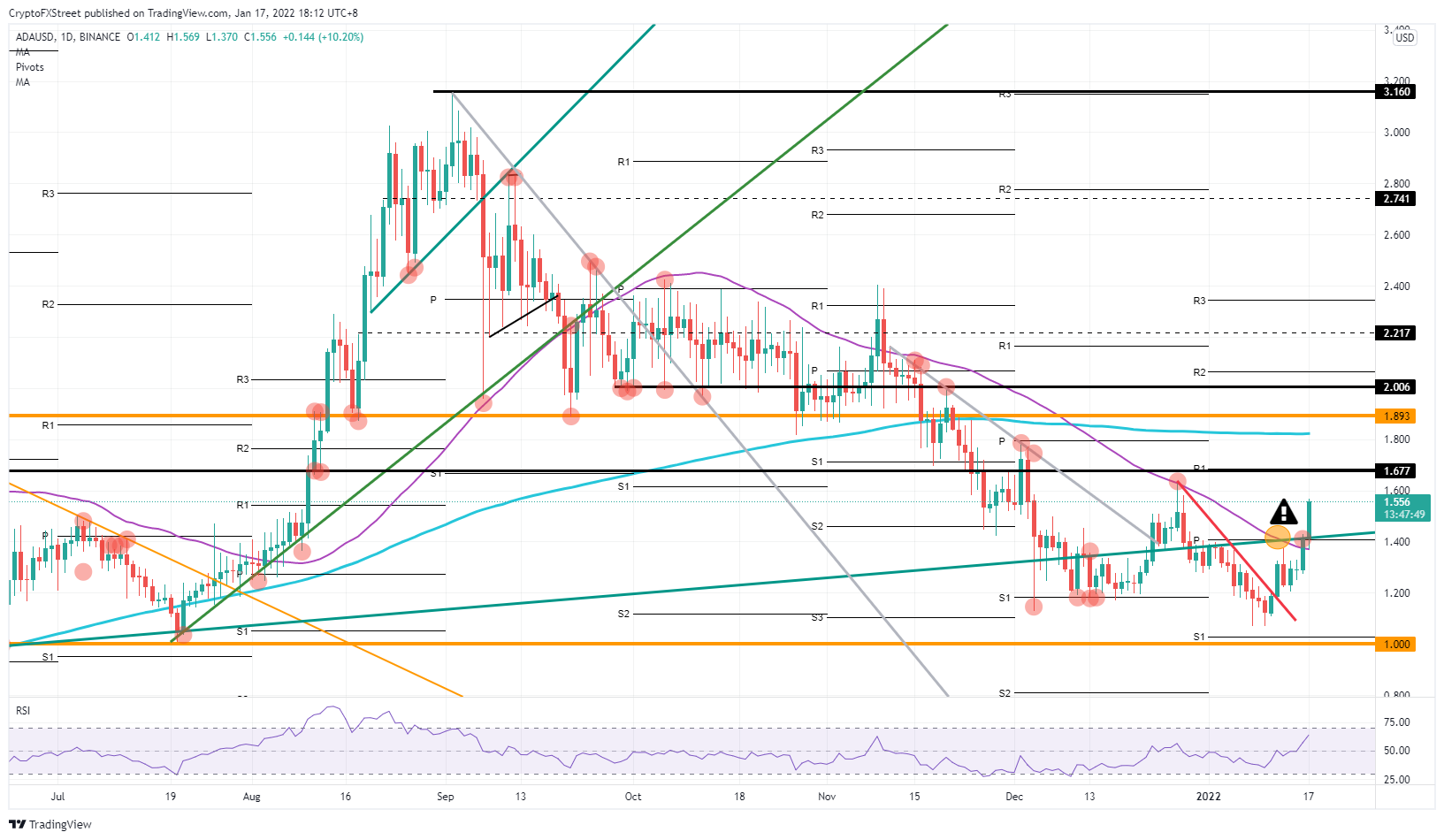 The risk to the downside for ADA bulls could be a quick fade and bears pushing bulls against the $1.40 barrier again. A break of that level would see an acceleration of selling with bulls cutting short their positions and reverting to that same sell-side volume. This could then lead to a possible nosedive to $1.00. This is a possible scenario in the near term, with the Relative Strength Index (RSI) sharply rising to overbought, as bulls lack leverage and the highly elevated RSI caps new gains.

Crypto bloodbath hasn’t even started yet

Bitcoin price, Ethereum and other cryptocurrencies are on the backfoot after the massive slaughter that happened on the trading floor on Wall Street yesterday. Instead of cleaning up the pink sheets from the floor, the cleaning staff are probably busy sweeping up plenty of burned-out traders that got annihilated overnight as the Dow Jones printed its worst performance since June 2020.

Dogecoin’s co-founder advises crypto investors to perform actual research and stay informed about their crypto investments. While the meme coin crumbles under pressure, analysts find a bullish pattern that could drive a rally in Dogecoin.

Is Do Kwon going to get arrested after Terra's LUNA price collapse?

The collapse of Terra's LUNA price and algorithmic stablecoin TerraUSD (UST) has sparked outrage in the crypto community. Institutions and retail investors suffered significant losses when $40 billion in LUNA and UST’s market value was destroyed within a week.

If you haven’t sold yet, XRP will give you another chance before it dumps to $0.19