Bitcoin (BTC) and Ethereum (ETH) have both fallen below critical support levels at $55,000 for the former and $1,700 for the latter. There is obviously an ongoing market sell-offs as the Bitcoin and Ethereum bears re-establishes their reign in suppressing the growth of both digital currencies to soar to new heights.

The bearish trend in the market today, though impacting heavily on the global cryptocurrency market whose capitalization has slipped by 5.08% to $1.71 trillion at the time of writing (11:13 AM UTC), some top altcoins have shown remarkable resilience to the market pull into the abyss. Per CEX.IO cryptocurrency price feed, XRP (XRP), and Uniswap (UNI) are trading in the green after maintaining a 24-hour growth rate of 4.9% and 0.55% respectively.

As is common in the market, the pull-down of both Bitcoin and Ethereum is being met with resistance from the bulls, but the general sentiment in the market per some fundamental realities is causing the weakening of the short-term positions of the buyers. Today’s analysis highlights the underlying factors stirring the obvious moves in the market and the twists, if any, being depicted by the technicals.

Amongst the worries in the market is the perceived slowing down of institutional investors’ debut into the Bitcoin market. Analysts on Wall Street are positing that the unsustained growth in the price of Bitcoin in the past days can be attributed to the lack of new funds, a trend that has accounted for the majority of the price pumps of Bitcoin in the past month. Uncertainties abound where there is no idea when new money will flow in.

Additionally, the anticipation of a $6 billion Options contract expiry this Friday, March 26th leaves investors in a neutral state. With recommitment not mandatory, the liquidated funds may not flow back into the asset, a situation that may drag BTC price down. 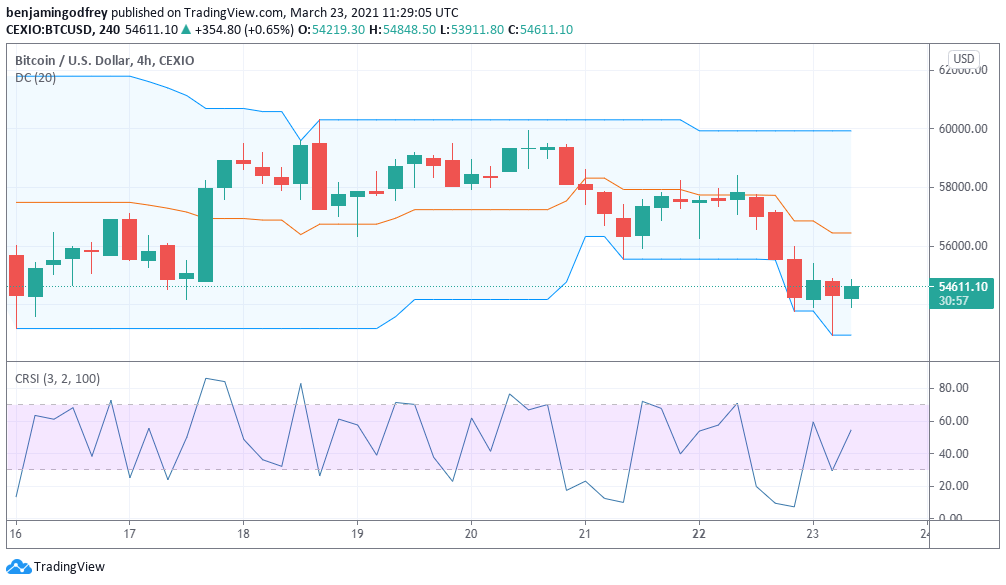 A look at the 4-hour BTC-USD chart on TradingView shows a declining trend, fueled by the bearish actions recorded since March 22nd. In a swift pull-down, BTC has dropped from the $58,000 mark, dumping through the $56,000 resistance level, and is struggling to break free from the $55,000 level.

While the Connors RSI is in a neutral position, not indicating a bull market, the Donchian Channels are repressive, with the price around the lower bands spelling the current bearish trend. A momentum change at this time is dependent on the potential of the bulls to buy more, even though no booster news from institutional investors permeates the space in the coming days. If this happens, Bitcoin may resurge back to $58,000, else, new support at $52,000 may be formed in the short-term.

In the past week, Ethereum charted its own course, maintaining its personalized market run irrespective of BTC’s nudge. However, the second-largest cryptocurrency is showing an increasing correlation with Bitcoin today, trading at $1689.08 and a 6.51% loss in the past 24 hours.

The ETH-USD chart on TradingView shows Ethereum is trading below the 50, 100, and 200 Simple Moving Averages implying a repressive price position that dampens hopes for a long-term price forecast. 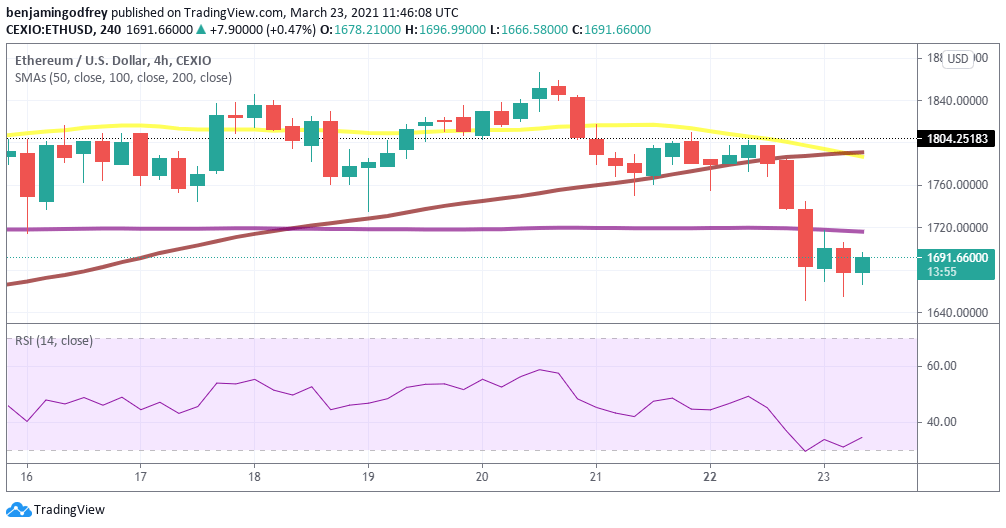 The Relative Strength Index is also trending toward the overbought region, and if the bears succeed in pushing the price below the $1,600 price mark, a free fall may be experienced, sending the coin back to its 2-month low of $1,200.

However, the resilience of the Bitcoin bulls may have a ripple effect on those of Ethereum seeing their current perceived correlation. If the fallback to $1,200 is prevented, ETH may form a short-term price that will be pegged back to $1,750.