Investors were flummoxed by the sharp fall in Bitcoin's value and that of other cryptocurrencies this past week, leading the total crypto market capitalization to plummet to as low as $1.23 trillion on May 12, its lowest level since July 2021.

Terra Luna's UST stablecoin, which was backed by both LUNA tokens and billions in Bitcoins, depegged from the US dollar, caused the market to panic. UST fell all the way down to an all-time low of $0.04495199 on May 13 and triggered a free fall for its sister token Luna, causing the suspension of the Terra blockchain.

Since stablecoins are supposed to be worth one dollar and immune to the volatility that plagues cryptocurrencies, some say it's a concerning sign reminiscent of Lehman Brothers' collapse, which was the trigger of the 2008 financial crisis.

The issue has attracted the attention of US regulators. Several reports indicate that the Securities and Exchange Commission (SEC) is looking into the UST case. Janet Yellen reiterated that Congress needs to authorize regulation of stablecoins in light of the UST breakdown.

What exactly happened to UST and Luna

LUNA's price plummeted on Saturday, May 7, as Terra's UST stablecoin lost its dollar peg. The project’s peg recovery efforts led to further selling pressure on BTC and ETH, which were already trending downwards. Luna supply inflated to over 6.5 trillion during its death spiral, hence its low price.

There's a popular narrative that points to this as a coordinated and deliberate attack in which one wallet dumped $350 million of UST on Curve Finance and Binance in an attempt to crash the stablecoin and force the Luna Foundation Guard (LFG), Terra's nonprofit that oversees its stability, to sell its Bitcoin reserves. LFG bought a total of 80,394 BTC between January and May of this year.

For UST to remain pegged to the dollar, LFG announced it would sell its Bitcoin reserves and buy UST, emptying its entire BTC reserves. In a later statement, Terra co-founder Do Kwon clarified that the funds would be used for trading.

The fate of LFG’s BTC reserves

Since the miracle didn't happen and UST is still plummeting (trading at $0.1484 at the time of writing), people are wondering what happened to the LFG Bitcoin reserve and if it really was used for the stablecoin’s support.

Blockchain analytics company Elliptic tracked the money trail to find out what happened to the LFG bitcoins and found that 52,189 BTC went to Gemini crypto exchange, and the remaining 28,205 BTC to Binance. The digital assets cannot be traced further or identified as being sold to support UST's price or transferred to other wallets, it said. 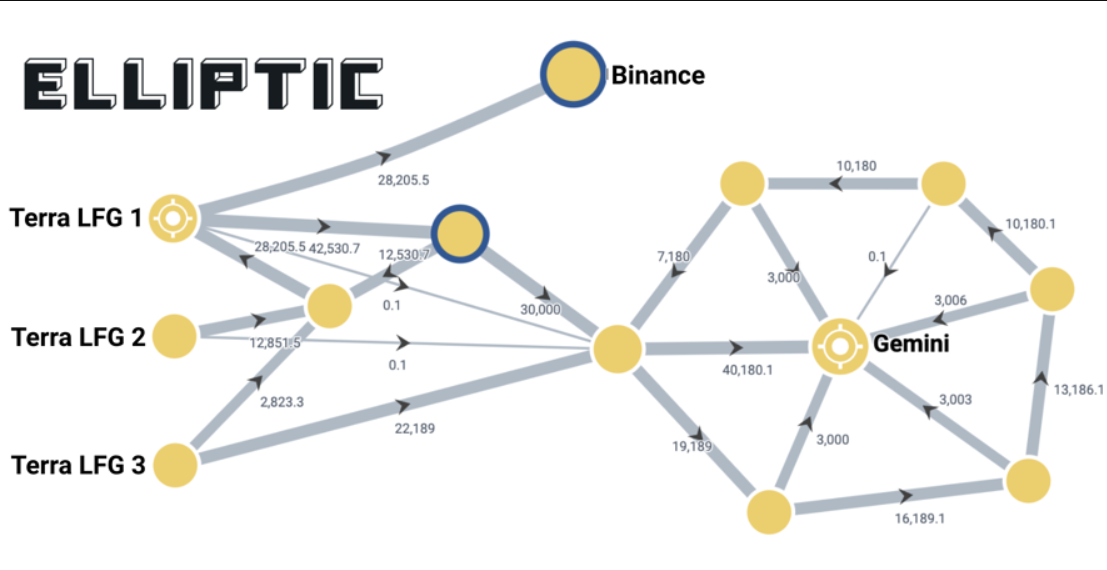 Terra creator Do Kwon, confirmed on Monday, May 16th, that LFG spent almost all of its Bitcoin reserve last week in a hapless attempt to save UST, “transferring BTC to a counterparty to enable them to enter trades with the Foundation in large size & on short notice.”

According to Marcus Sotiriou, analyst at the UK-based digital asset broker GlobalBlock, it is unlikely that the same will hold true for Luna or UST.

“As UST has failed to restore its peg, it is clear that confidence in the protocol has been lost. One way in which Terra can recover, and maybe the only way, is to focus on growing the Layer 1 blockchain and its ecosystem whilst using either USDT or USDC as the stablecoin of choice. If the Layer 1 ecosystem grows successfully then they could potentially be able to pay off the debt eventually. At the moment though, there seems to be little hope for Terra, as well as UST and LUNA holders,” he said.

While some have called this a ‘Lehman Brothers’ moment due to the contagion this may cause, Marcus Sotiriou said he is optimistic that UST’s fall would not be that catastrophic – a collapse of USDT would be though, but its deviation from the $1 peg has been almost fully restored to $0.9991 by the time of writing.

“Although USDT becoming de-pegged persistently is a risk worth noting, I am confident that the USDT peg will be restored as I think Tether have sufficient backing in their reserves, and its mechanics are safer than the UST stablecoin,” the expert said.

Even though retail sentiment towards crypto is bearish, he indicates, major institutions like Citi, BNY Mellon and Wells Fargo have recently invested in crypto trading firm Talos, in a $105 million funding round. “This shows that amongst the ongoing fear in the market, established trad-fi institutions are entering the crypto space. It is a signal of where the space is headed in the long-term, regardless of short-term volatility,” Marcus Sotiriou concluded.

As an addition, I would like to point out that whales have been quietly stockpiling Bitcoins during the recent market panic. The following two wealthiest wallets show a similar pattern of accumulation.

These whales wouldn't accumulate Bitcoin if they had any doubts about its impending crash.

Investors of all levels can sometimes struggle to cope with cryptocurrency roller coasters. The LUNA case is especially tragic, since some people lost their entire savings. While it was quite an established and trusted project, its UST didn't form a fundamental pillar of the entire industry like Tether and Luna was in no way comparable to Bitcoin.

It is impossible to tell for sure whether the dump was a deliberate act, who stood behind it, or what its purpose was. Transparency in Terra's actions could shed light on these questions. Even so, this wasn't the 'Lehman Brothers' of crypto – yes, it triggered panic, but smart investors continued to trust in BTC, and major crypto assets have recovered successfully. Therefore, it was not an existential threat to the entire industry.

The lesson from this case is not to invest more than we can afford to lose, not to put blind faith even in a project that seems solid, and not to make important decisions without thinking everything through.