The pioneer digital currency hit a new multi-year high at $16,491 and settled above the critical resistance of $16,000. At the time of writing, BTC/USD is changing hands at $16,350. Despite the retreat from the intraday high, Bitcoin is still trading 3% higher from this time on Thursday. The coin has gained over 5% on a week-to-week basis.

Currently, Bitcoin is on the way to finish the sixth consecutive week in a green zone, which is the longest bullish streak since March. Bitcoin's market share jumped to 65%, while its capitalization exceeded $300 billion.

Notably, according to the research performed by CryptoVoices, Bitcoin's market value has already surpassed the monetary base of several economies, including Russia, Australia, Sweden and Poland. This measure includes physical currency and bank reserves held by the local central banks. 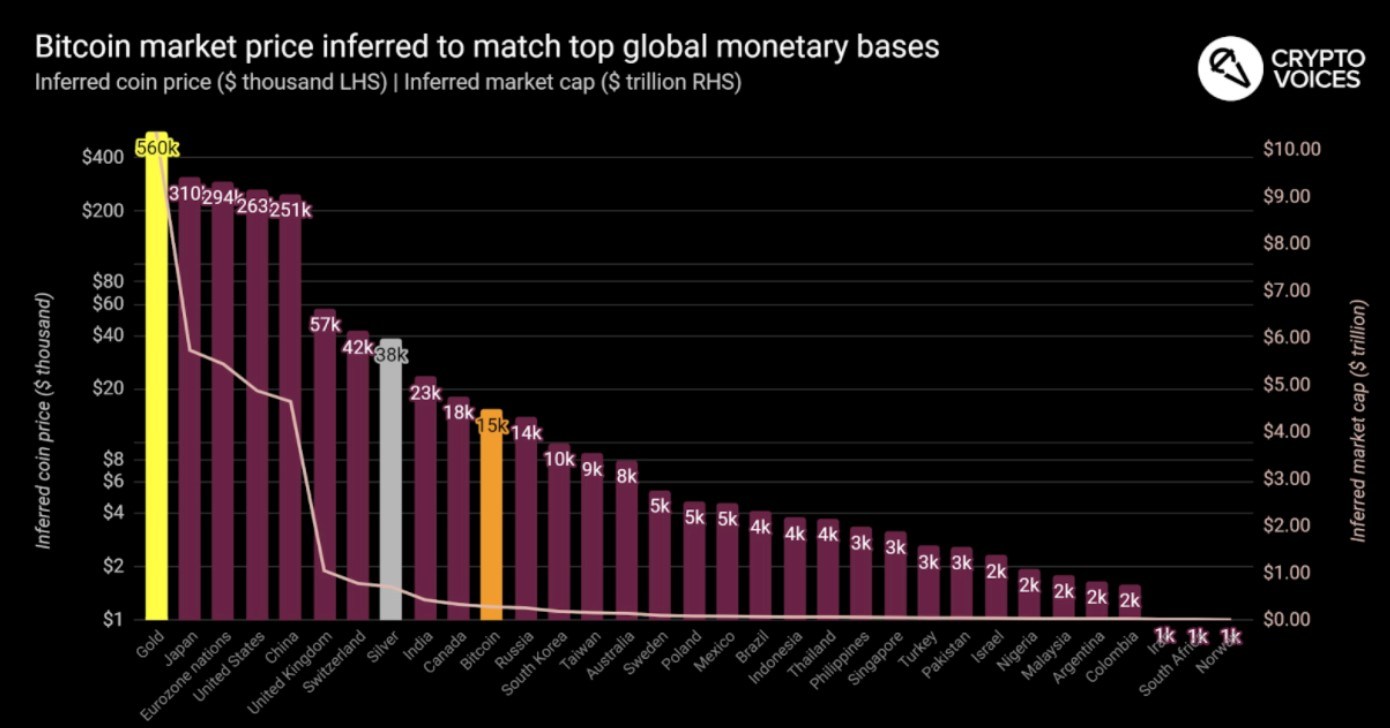 Once the price hits $18,000, Bitcoin's market capitalization will eclipse the Canadian dollar's base. According to Fernando Ulrich, an economist at Crypto Voices, central banks and governments try to print their way from the recession, depreciating their fiat money. As a result, in 2020, Bitcoin surpassed several currencies pressured by excessive printing.

As Bitcoin gained over 40% on a month-to-month basis and settled above $16,000, many cryptocurrency experts bet on the extended growth towards a new all-time high at $20,000. The bullish scenario is supported by several fundamental factors, including institutional buying and skyrocketing inflation expectations amid excessive monetary and fiscal stimulus injected by global central banks.

The growing demand from the financial industry is another major catalyst driving Bitcoin higher in the foreseeable future. According to Kadan Stadelmann, Chief Technology Officer of Komodo, most recent cash allocations from Grayscale, Square and MicroStrategy are behind Bitcoin's growth above $16,000.

Speaking in the interview with Finance Magnates, he commented:

Bitcoin price is being driven up partially due to the fact that major players and investors in the financial industry are showing an increased interest in bitcoin and demonstrating an acquisition appetite.

Recently, FXstreet reported that large traditional investors started paying attention to the industry, creating positive vibes on the market. Even such a diehard Bitcoin critic as Nouriel Roubini admitted that Bitcoin might be used as a store of value.

Large-scale tech firms also pave for the cryptocurrency mass adoption, making it easy to buy and use digital assets in everyday life. Recently, PayPal unlocked its feature of buying and selling crypto directly on the platform for US users. Also, the company increased its weekly purchase limits from $10,000 to $20,000.

A massive increase of Bitcoin whales has accompanied a sustainable Bitcoin growth in October and November. Santiment's holder distribution chart shows that since the middle of October, the number of addresses holding from 10,000 to 100,000 BTC rose up to 111 from 104. Roughly seven whales joined the network, representing a nearly 7% increase.

Considering that these whales hold between $160 million and $1.6 billion in BTC, this development can be translated into intense buying pressure as large investors' activity often helps to understand what's happening on the market.

The findings of the Arcane Research team supports the idea that whales are entering the market. The experts pointed out that the number of large traders more than doubled in 2020 compared with 2019.

The number of large #bitcoin traders on CME has been accelerating this year.

The average in 2019 was 45 large traders without any notable growth throughout the year. However, this number has more than doubled in 2020.

Also, the BTC supply on the exchanges continued to decrease and got close to the recent lows of 707,000 coins reached on November 2. This momentum reduces the selling pressure and confirms that Bitcoin has entered an accumulation phase. Meanwhile, the reduced supply amid growing demand inevitably leads to a substantial price increase.

Bitcoin's supply on the exchanges

Bitcoin is bound to retest support levels before proceeding with its journey to new all-time highs. The question is whether it will start from the current levels or $17,000-$17,500. The answer depends on how the market navigates the weekend when the liquidity is usually lower.

The retracement may be triggered by profit-taking as investors might start looking to cash out on their positions. However, this is not something to be fearful of as all dips will be eagerly bought at least until BTC stays above $14,000.

If history is any guide, Bitcoin can take a strong hit but always comes back. Now that it is more integrated with the traditional financial system and people's everyday life, Bitcoin is well-positioned to continue moving with a long-term bullish trend.

Michael van de Poppe, a trader on the Amsterdam Stock Exchange and a famous crypto twitter analyst, noted that a 20-30% correction would become a massive buying opportunity.

I do agree with the statement that we're in the disbelief phase. It's also hard to state something else when $BTC is just 20% away from a new all-time high.

Regardless of that, a correction of 20-30% that massive opportunity to be buying relatively 'cheap' $BTC.

On a weekly chart, BTC/USD moved outside the Bollinger Bands and its upper line now serves as the first critical support area at $15,000. This barrier is likely to stop the correction and trigger a new bullish wave towards $17,100, the highest level of 2018. Once it is out of the way, the upside is likely to gain traction with the next focus on $18,000, followed by an all-time high at $19,800. 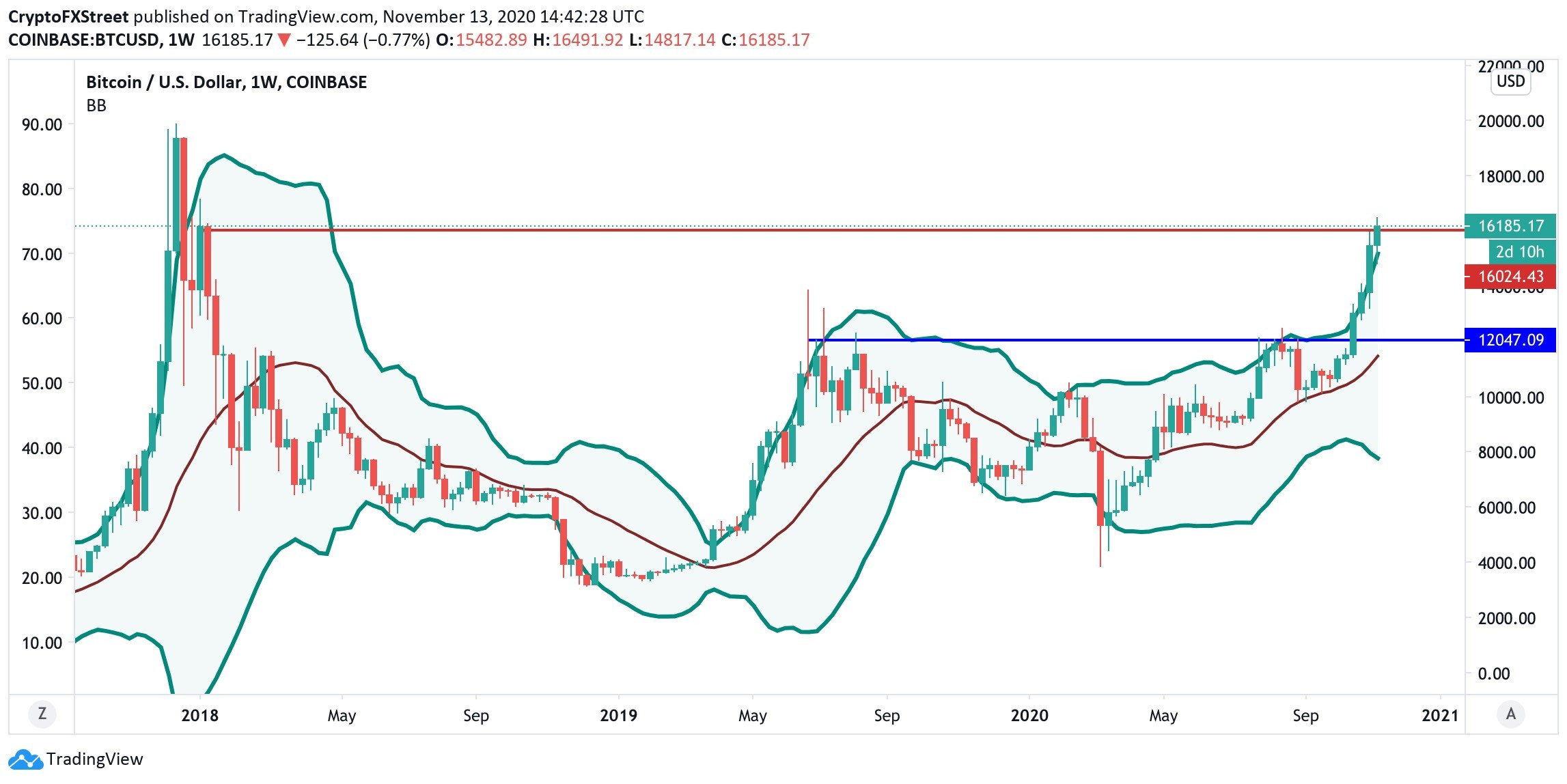 Meanwhile, if $15,000 gives way, the downside correction may be extended towards $12,000 reinforced by the middle line of the weekly Bollinger Band.

Intotheblock's In/Out of the Money Around Price (IOMAP) indicator reveals that there is little resistance above the current price. Virtually, the price may continue climbing to $18,750 before it faces a strong supply wall.

Bitcoin's In/Out of the Money Around Price data

At the same time, nearly 1 million addresses had previously purchased 500,000 BTC on approach to $15,000. This area coincides with the technical resistance and can absorb some of the selling pressure from the potential profit-taking. If it gives way, the sell-off may continue. The IOMAP cohorts show that the next significant supply level sits around to $14,000-$13,800.

A sustainable move above $16,000 has improved the long-term Bitcoin's picture and created strong bullish vibes. Both fundamental and on-chain metrics imply that the pioneer digital coin is set to continue growing with the nest upside targets at $17,000 and $18,750.

On the other hand, the short-term downside correction may push BTC towards $15,000, where a fresh buying interest is likely to appear. A sustainable move below this area will attract more sellers to the market and extend the drawdown to $14,000 and potentially to 12,000. 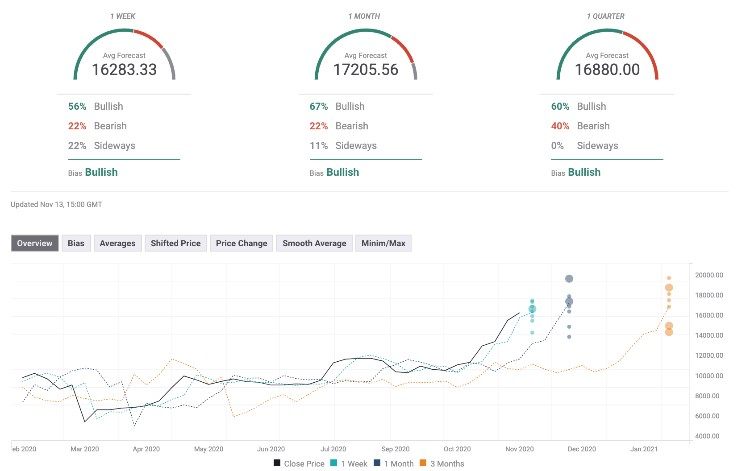 Bitcoin's FXStreet Forecast Poll of experts shows an improvement from the previous week as the expectations on all timeframes turned bullish. Notably, the price predictions imply that the participants bet on Bitcoin's growth above $17,000 on a monthly basis with the following correction towards $16,000.