Bitcoin price has spent roughly two weeks consolidating around a psychological barrier and shows no affinity to move higher or lower. This indecision indicates reduced volatility and that an explosive move is on its way. One possible fundamental driver for such a move could be the introduction of a spot Bitcoin ETF currently awaiting approval by the SEC.

ETFs to Metaverse, the hype continues

Bitcoin saw massive adoption in October after the anticipation of the approval of an ETF triggered an explosive rally in BTC price. Given that the products approved by the SEC were futures and not spot, the community was happy with the victory.

A seemingly significant development on a similar front is the entry of Grayscale Investments and its spot ETF filing. The Securities & Exchange Commission (SEC) has noticed the filing from the investment company on November 2 and has 40 days to provide its decision on the matter.

While some investors are turning bullish on this news and hoping that a spot ETF could be approved around the holiday season, their hopes are misplaced since the SEC could provide itself an extension up to 240 days. The regulators have done this repeatedly since the VanEck filed the first ETF a few years ago.

If approved, Grayscale will be converting its Grayscale Bitcoin (GBTC) product into a first of its kind - spot Bitcoin ETF. While the hype around these products pushed Bitcoin price to new highs, investors seem to have moved on to a different space in the cryptocurrency realm after social media giant Facebook announced its rebranding to Meta on October 28. This move from the company is an attempt to position itself as a leader in the “metaverse” industry.

Metaverse is a neologism used to describe an immersive world, much like the current world we live in but computer-generated.

Interestingly, the official Twitter account of Meta tagged Balenciaga, a luxury brand and asked about the dress code in the metaverse..

Hey @Balenciaga, what’s the dress code in the metaverse?

Venture Capitals, funds, and institutions did not want to be left behind the metaverse bandwagon, which has led SoftBank and others to get a stake in projects joining the trend. A noticeable effect of this announcement from Facebook is the sudden demand for gaming tokens in the cryptocurrency space like MANA, SAND and others, that overlap with the metaverse ecosystem. The the market value of these coins has seen more than a 200% increase in a few days.

Bitcoin price has been consolidating since October 22 around the $60,000 psychological level and shows no signs of breaking out. The chance of a downswing into the liquidity pool, ranging from $56,000 to $51,000, is now high. Confirmation of further bearishness will come after BTC produces a daily close below $58,000.

Investors need to note that this downswing is a short-term outlook and will provide a ‘buy’ opportunity. However, if bullish momentum rises, pushing Bitcoin price to produce a daily close above $64,000, it will invalidate the bearish thesis and preemptively kick-start an uptrend. In this situation, Bitcoin price will make a run at the 161.8% trend-based Fibonacci extension level at $77,525 and set up a new all-time high. 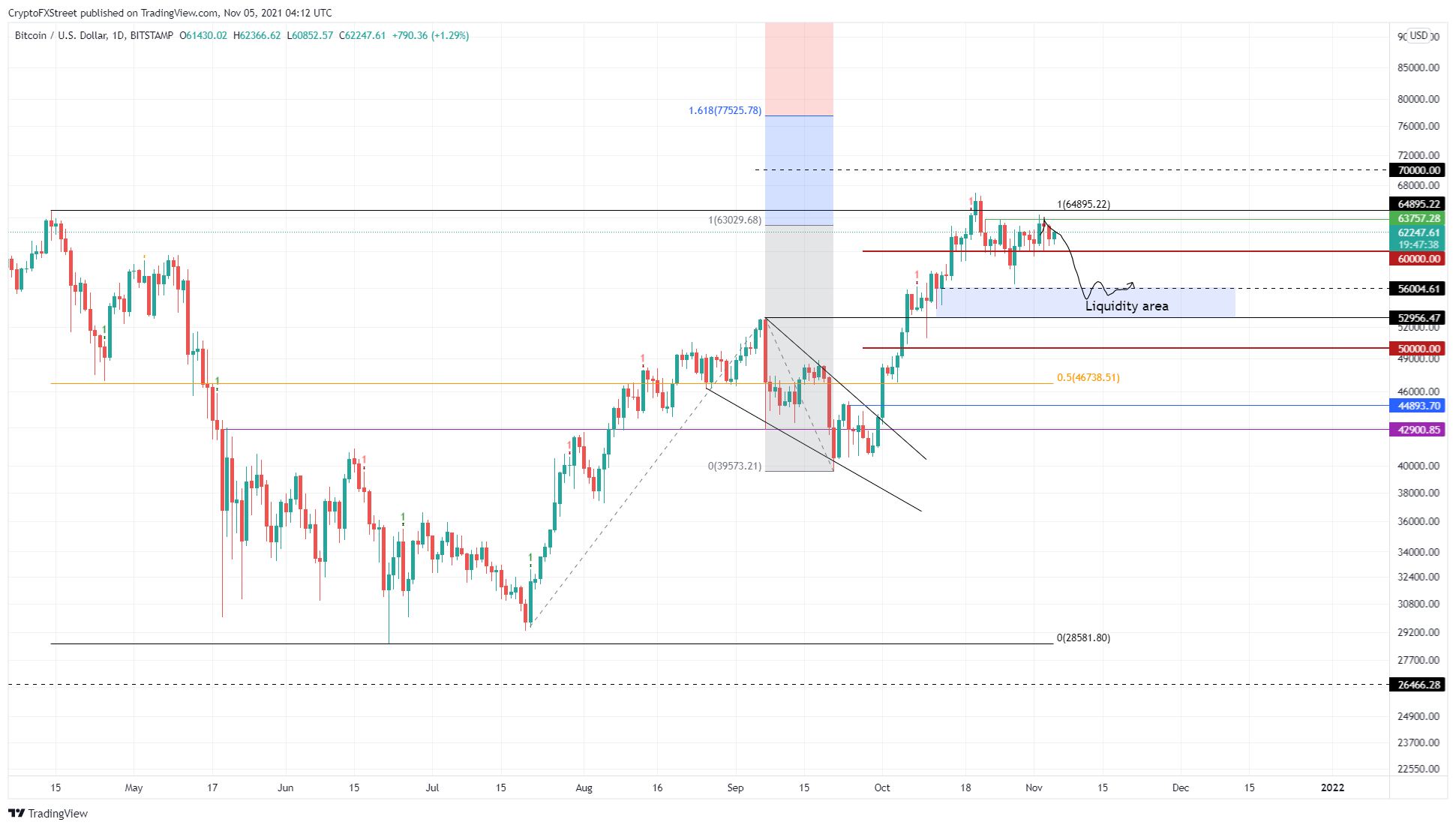 Supporting this long-term bullish outlook is the whale activity that shows eight new whales holding between 10,000 to 100,000 BTC have joined the Bitcoin network since October 20. This increase in the long-term investors holding BTC suggests that they are bullish on Bitcoin price performance.

The number of daily active addresses (DAA) has been growing since July 20, suggesting increasing interest from BTC investors over the past four months. Typically, increased interaction with the network could serve as a proxy to investment interest and hence a bullish sign.

While things are looking good for the big crypto, the 365-day Market Value to Realized Value (MVRV) model suggests the possibility of a short-term correction as it hovers around 37%.

This on-chain metric is used to determine the average profit/loss of investors that purchased BTC over the past year. These holders are in the money and could book profit, increasing the chances of a correction.

Market participants, especially leveraged traders, need to be aware of a short-term pullback that could put their leveraged longs in jeopardy. If Bitcoin price slips below $50,000, it will negatively impact the bullish sentiment and invalidate it. In some cases, it could also trigger panic-selling to $46,000.