Bitcoin has engaged reverse gears, just most virtual currencies on the last day of July. The overarching declines have come unexpectedly and it is not clear that is the reason behind the fall. Bitcoin ETF remaining applications are still with the Securities and Exchange Commission (SEC). Besides, the recently rejected application by Gemini exchange did little to hurt Bitcoin which managed to stay above $8,000 for the most part of the last week’s trading.

In other news, New York Times Opinion columnist, Paul Krugman has taken a swipe on cryptocurrencies saying that he is a skeptic of digital assets mainly because of “transaction costs and the absence of tethering.” In his post, Krugman states:

“Set against this history, the enthusiasm for cryptocurrencies seems very odd, because it goes exactly in the opposite of the long-run trend. Instead of near-frictionless transactions, we have high costs of doing business, because transferring a Bitcoin or other cryptocurrency unit requires providing a complete history of past transactions. Instead of money created by the click of a mouse, we have money that must be mined — created through resource-intensive computations.”

He went ahead to say that virtual currencies are taking the financial system 300 years back in the name of “celebrating the use of cutting-edge technology.” In addition to that, he said that cryptocurrencies “have no backstop, no tether to reality. Their value depends entirely on self-fulfilling expectations – which means that total collapse is a real possibility.”

It is unclear what could have led to the slide in Bitcoin price and other digital assets, but Paul Krugman’s post is likely to have been a catalyst.

Consequently, Bitcoin price breaking out of the contracting triangle pattern could have triggered the sharp declines. BTC/USD is trading below $7,800, but the 38.2% Fib retracement level with the previous swing high of $8,490.39 and a low of $7,207.40 is working as a support at $7,699.
There is a weak bullish momentum emanating above this level while the technical indicators are beginning to change direction upwards to show that bulls have found an entry. Bitcoin will face resistance at the broken support highlighted by $7,800. The support $7,699 must hold to avoid further breakdown towards $7,600 support. However, the trend is still strongly bearish at the time of press. 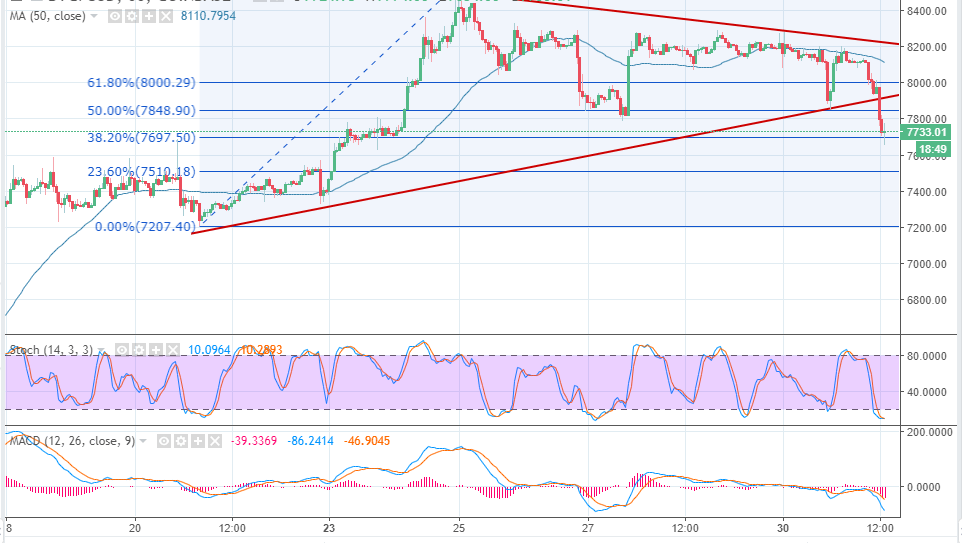 Polygon’s MATIC price signals bears have re-entered the market. If the profit-taking continues, a cataclysmic fall could occur to breach the $0.31 lows. Polygon's MATIC price could justify the old traders saying that "early buys quickly die".

Is the Safemoon price warning investors of a future rug pull?

Terra’s LUNA price sees compression of 8- and 21-day simple moving averages. LUNA price volume has tapered out considerably amidst June’s downtrend. Invalidation of the uptrend is a breach below $1.60.

Bitcoin price shows concerning signals as the bears have recently rejected the $22,000 ascension. It appears smart money wants to negotiate for the peer-to-peer digital currency at a much lower price.