Bitcoin is reversing the weekend’s price bounce alongside weakness in gold as prospects of tighter monetary policy in the U.S. push Treasury yields and the dollar higher.

The European bond yields are also increasing, with the oil rally bolstering expectations for faster scaling back of stimulus by central banks.

A rise in yields is said to dilute the appeal of perceived safe havens or inflation hedges like gold and bitcoin. However, bitcoin may remain relatively resilient, according to analysts.

“What matters for gold is real (inflation-adjusted) yields, not nominal. And yes, real yields are rising, so I would imagine that gold will remain on the backfoot,” Ilan Solot, global market strategist at Brown Brother Harriman, told CoinDesk. “This could have some marginal impact on BTC as well, but I don’t think it’s a major driver.”

Treasury data shows that the U.S. 10-year real yield has risen by 20 basis points this month but remains deep in negative territory at -0.87%. A continued ascent in real yields may hurt gold and bring moderate selling pressure for bitcoin from those who have adopted the cryptocurrency as an inflation hedge.

Institutional participation in bitcoin has increased since the March 2020 crash, making it sensitive to traditional markets. However, correlations are very flippant in the crypto market, and the likes of MicroStrategy have added bitcoin to their balance sheet for the long haul. These big players may not sell in response to gyrations in bond yields.

Moreover, real yields are likely to stay low as the ongoing rally could bring more inflation and boost demand for inflation hedges.

“If investors are looking at crypto, they’re on the hunt for the deepest yield; yield that they struggle to get more and more from traditional markets. That coupled with the poor macro backdrop and continued soaring inflation means that crypto yield is really only just getting started,” said Ben Sebley, chief growth officer at BCB Group, a business-to-business provider of banking rails to crypto companies. “Once TradFi overcomes all the initial barriers to entry, I think this will be the thing that takes the [crypto] industry to the next level of global adoption.”

Past data shows bitcoin thrives in an environment of rising nominal yields. 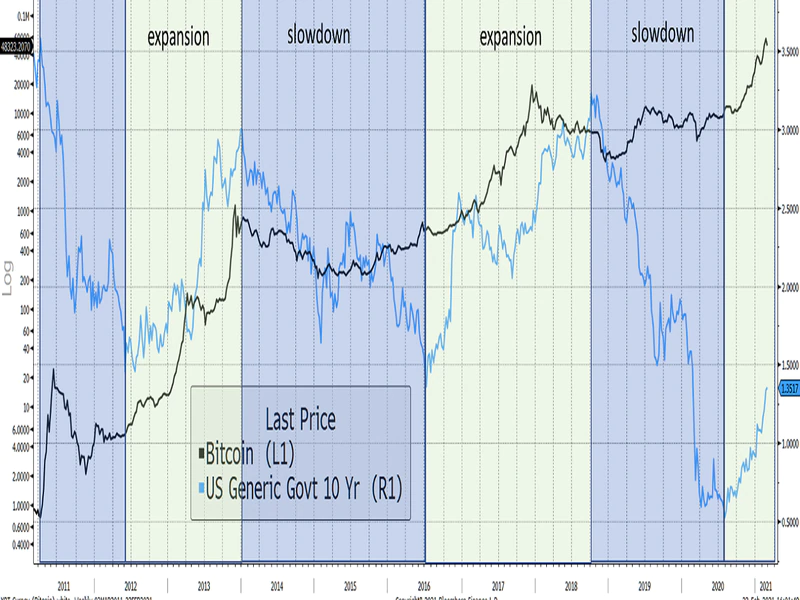 “About 87% of bitcoin’s performance was delivered while the U.S. 10-year bond yield has been rising,” ByteTree CIO Charlie Morris noted in a blog post.

Lastly, according to Brown Brother Harriman’s Solot, the connection between monetary policy and gold and bitcoin becomes more pronounced during periods of extremes, which doesn’t appear to be the case right now.

“But it’s not the type of hyper-inflation tail risk some argued could happen when the Fed and U.S. government started super stimulating the economy in the early stages of the pandemic. These are supply-side inflation problems,” Solot added.

That said, bitcoin may take a hit if rising yields or China property market turmoil weighs over the global equity markets. The futures tied to the S&P 500 are trading 0.35% lower on the day. The cryptocurrency fell sharply last week along with stocks as Evergrande fears gripped markets. “Almost every bitcoin correction in 2021 has correlated with an S&P 500 correction of -2% or more,” Charles Edwards, founder of Capriole Investments, tweeted.

Technical charts show bitcoin is trapped in a narrowing price range. The focus would shift to support at $40,000 if the triangle is breached to the downside. 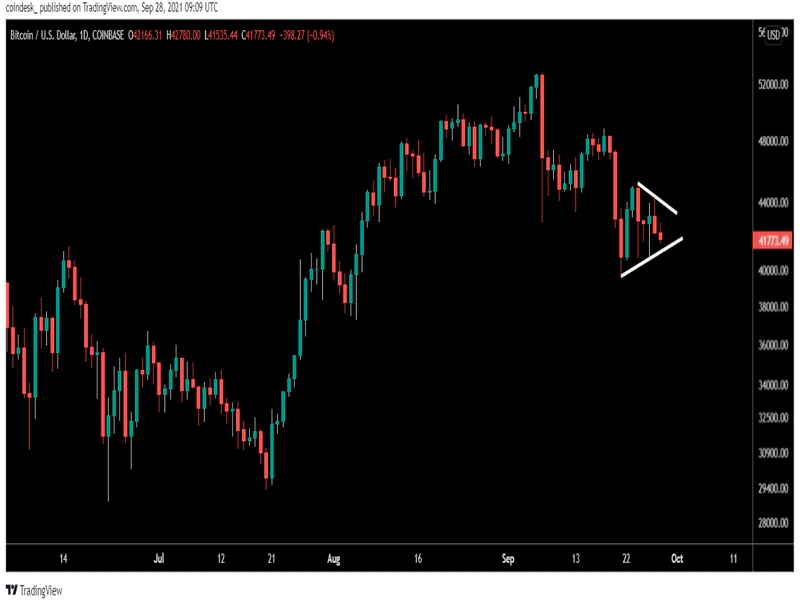