You’ve heard many times that Bitcoin has no fundamentals, so it must be traded based strictly on technical analysis. Bitcoin is pure speculation, with no intrinsic value, right?

Well, I’m here to challenge those assumptions. And after reading this article, you will be empowered to understand Bitcoin from an entirely new perspective. These powerful insights will give you a lens with which to see the long-term value proposition of Bitcoin, and to properly understand where we are now.

Intangible assets have always been difficult to quantify. In “Capitalism without Capital,” Johnathan Haskel and Stian Westlake make the argument that our ability to quantify intangibles will be key to ensuring that the economy of the future benefits everyone. The implications range from public policy decisions, to the debt/equity balance that large corporations will rely on to fund and grow their businesses, and even to the modern worker who in the developed world is more and more likely to work in a service related job. The skills of the future are increasingly related to knowledge work and the ability to understand, manipulate and extrapolate from intangibles.

Bitcoin is one such intangible asset, and perhaps one of the most puzzling. Bitcoin is an open source project, that’s essentially a form of peer-to-peer money. How much is it worth? What are the implications of scarce digital assets in general? Or, is this whole thing a joke, or just some kind of fad?

If you feel lost when it comes to Bitcoin, you’re not alone. Bitcoin relies on many complex systems that range from advanced mathematics, cryptography, computer science, economics and game theory. While most currencies that we use today are issued by a government, Bitcoin is an open source software project that lets anyone participate. So, unlike traditional fiat currency, where policy is decided by the FOMC with pressure from elected officials via Twitter, Bitcoin benefits from a massive amount of research going into applied cryptography, thousands and thousands of software engineers writing code, and is undergoing a rapid evolutionary process.

In the business world, one intangible that’s very important is R&D. We know that companies need to research new products, new services, new methods, come up with new materials. Any organization that doesn’t innovate will eventually lose its edge and be overtaken by competitors. But, how can we quantify R&D when it comes to Bitcoin? Does Bitcoin have R&D?

I believe that Bitcoin does in fact have R&D, but we have to expand our minds a bit to understand it. Instead of a company funding a secret research laboratory and hoping for minimal spillovers, Bitcoin’s research happens in the open. Researchers publish work in academic journals, in blogs, and code is usually written in open source repositories like GitHub. 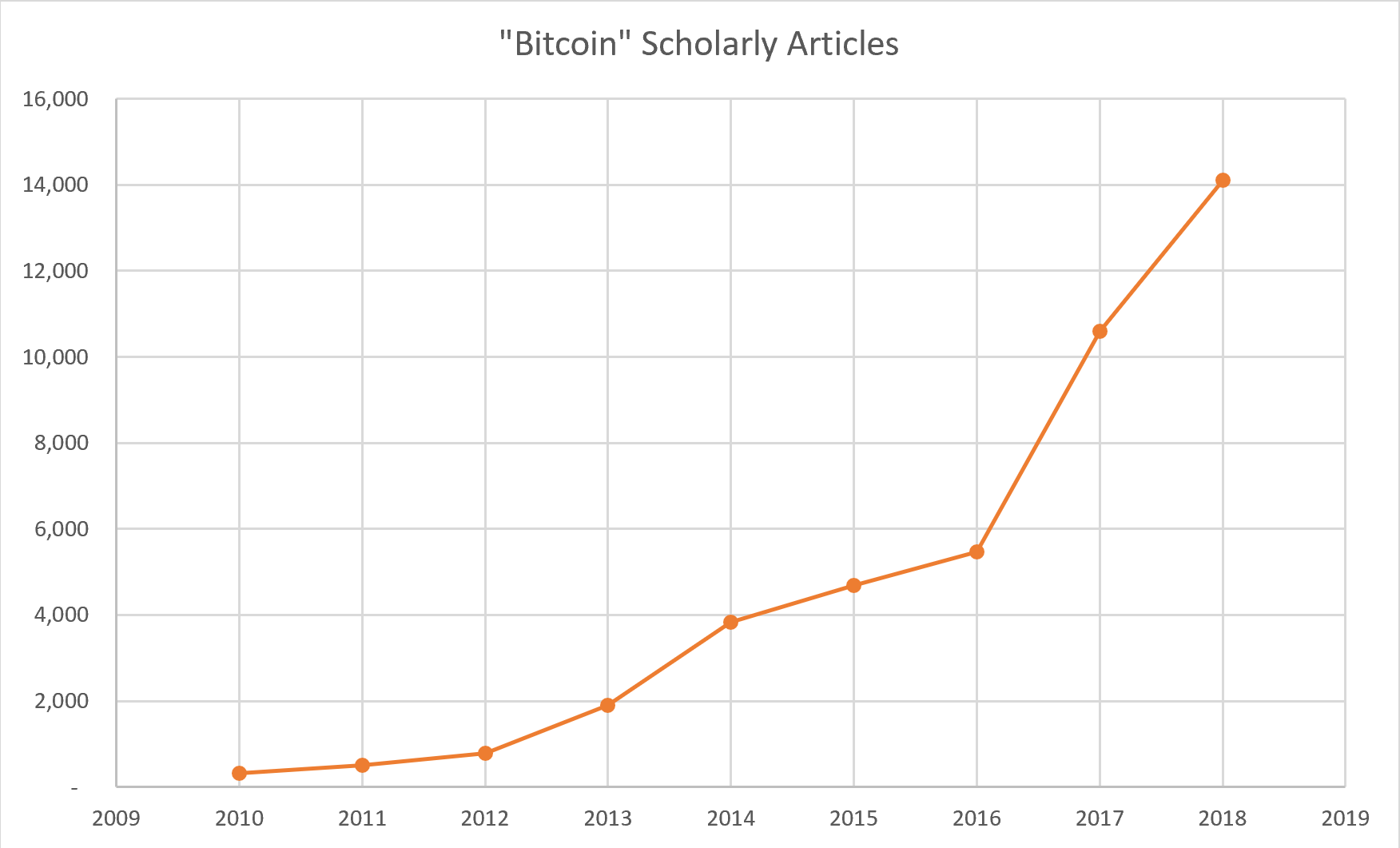 As with all R&D, the investment in time and energy comes first. The rewards come later when a breakthrough is achieved, or a novel new approach is discovered. The amount of scholarly research into Bitcoin has increased every year, regardless of what happens to the price.

Another way to quantify Bitcoin R&D is by counting the number of open source projects that contain the word “Bitcoin.” This is admittedly a simplistic approach. But I contend that this measurement is very valuable because it shows how much brain power is being applied not only to Bitcoin, but to the surrounding ecosystem of tools and complementary projects that can arise from (or crease) positive externalities.

Here’s what I found. 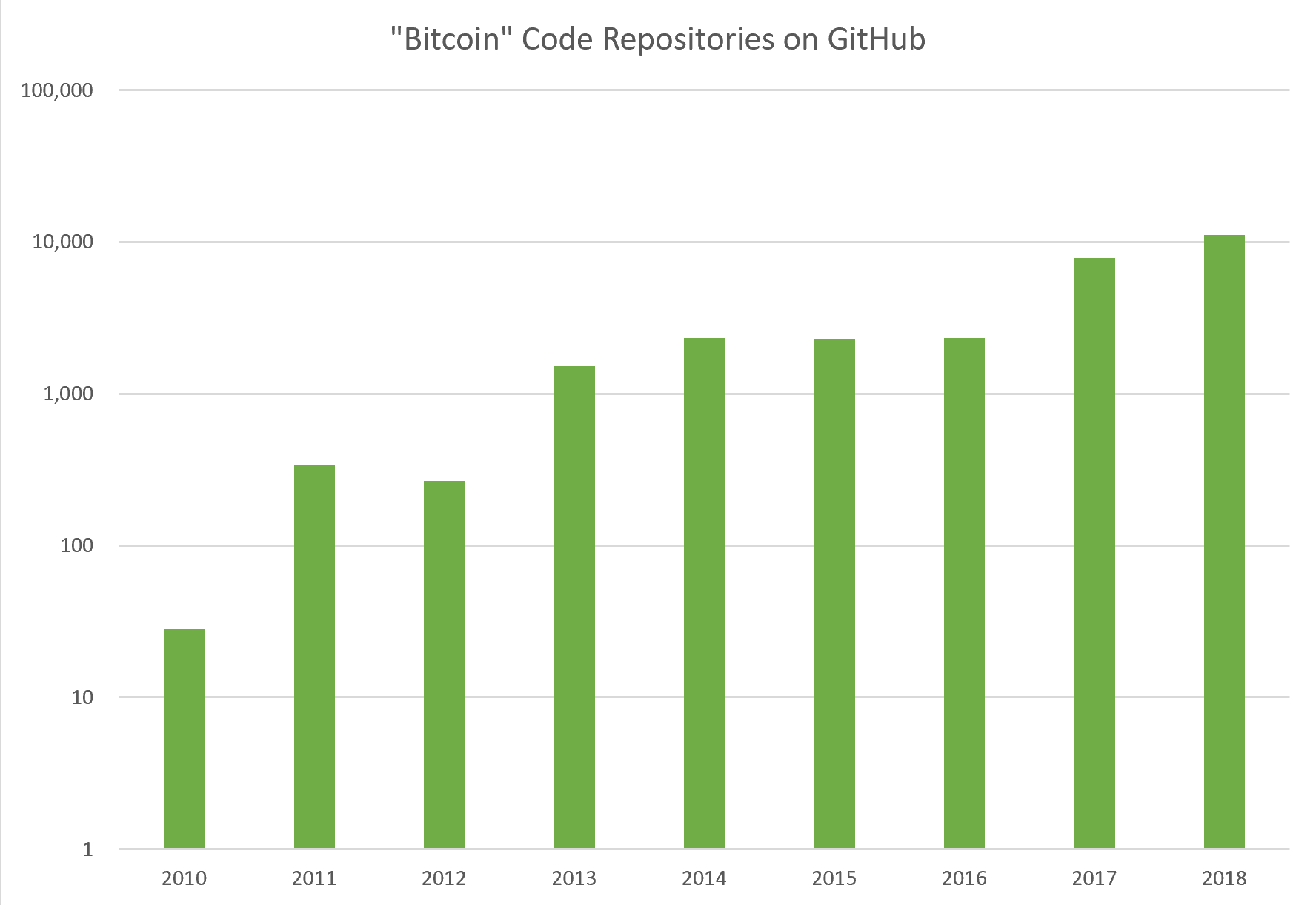 Here I’ve chosen to display the Y-axis in log scale, so you can see that there were results in 2010. As you can see, growth has been nearly constant and exponential for eight years. There were over ten thousand new code repositories created in 2018 that referenced Bitcoin in some way. Each one of these adds to the human capital and knowledge in the space. I find it particularly interesting that this statistic increased by 40% between 2017 and 2018 even while the price of Bitcoin fell from nearly $20k to just above $3k.

So, from a fundamental perspective, we can see constant investment of human time, energy, and brain power into Bitcoin. Researchers, scientists and engineers from a number of disciplines are pouring their efforts into this new field of study. Although we cannot say for certain that Bitcoin will be the ultimate and primary beneficiary of this effort, the data that we have seen today certainly seems bullish for the long-term.

The Bitcoin Network is in my mind the primary source of data for fundamental analysis. But when I say, “The Bitcoin Network,” what exactly to I mean? There are several ways we could interpret this, but today we’re going to focus on the miners, who secure the network, and the users, which give Bitcoin its value.

Let’s take a look at the hash power of the Bitcoin network on a monthly basis.

Some time in 2015, the Bitcoin network became the most powerful computing network in the world. Today, despite the recent downturn; the hash power of the Bitcoin network is 100x greater than it was three years ago. The significance of this is that Bitcoin is becoming more robust all the time, harder to attack. There simply isn’t enough computational power to brute force Bitcoin. Sure, there are many possible attack vectors to consider, but at least in this way Bitcoin is very resistant to being overtaken. The network itself incentivizes the participants to act in its best interest.

Another way of thinking about the Bitcoin network is by considering the number of participants. This approach was validated in a seminal research paper published in the March 2015 issue of Journal of Computer Science and Technology. Researchers showed that by taking a single statistic, the monthly active users of Facebook and Tencent, they were able to build a highly predictive model of their revenue. 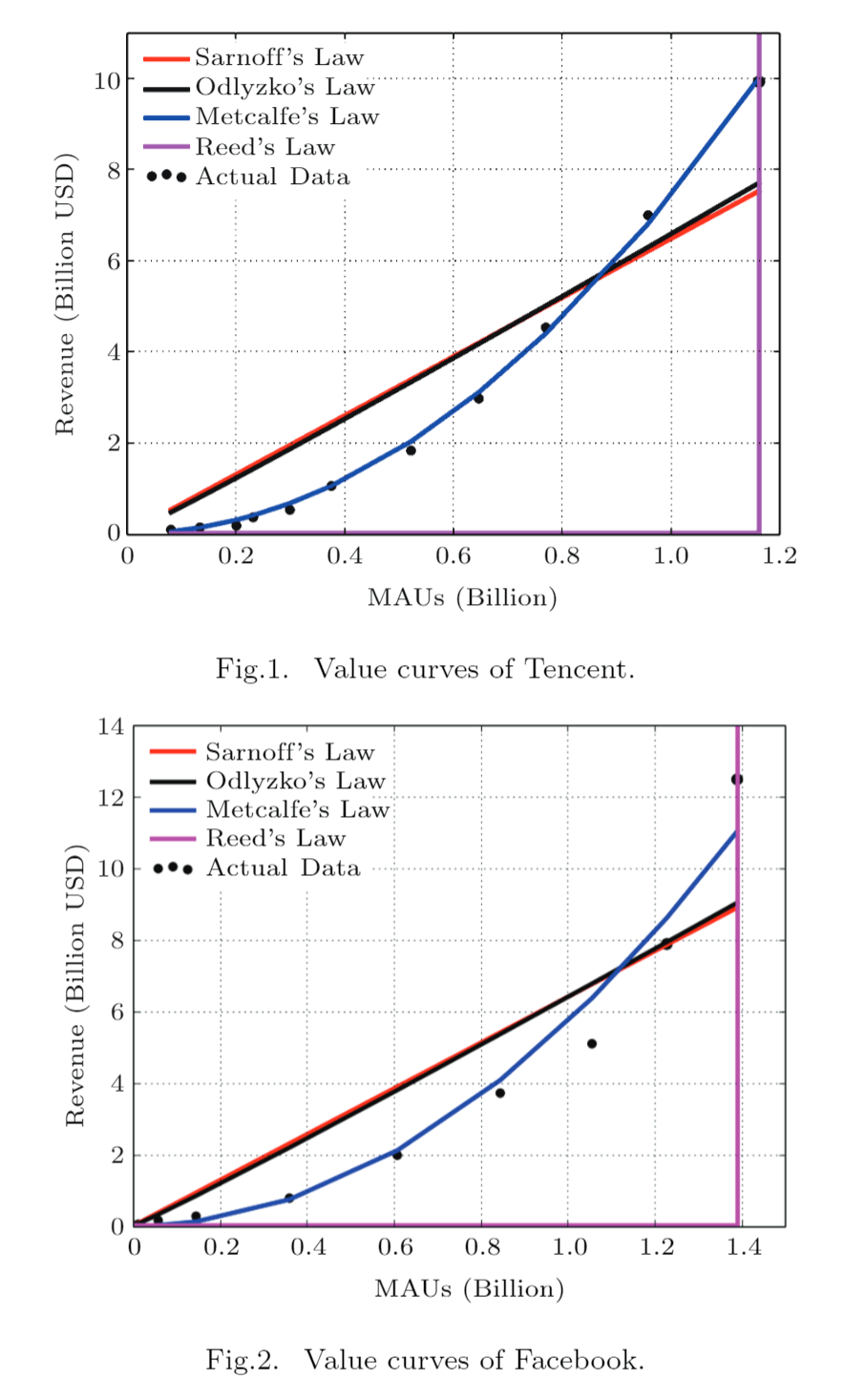 This model is referred to Metcalfe’s Law, or colloquially as “the network effect.” Recently this approach has been used to model the value of the Bitcoin network to great fanfare. One catch with Bitcoin is that we don’t necessarily know the number of active users; because the only data we can trust comes from the blockchain. This data does not have a list of “users” per se. Instead, we can look at the number of daily active addresses, or unique addresses in use (this is an imperfect measurement, but it turns out to still be highly predictive). I have used linear regression to build my own models in this same vein. Nonparametric statistics have validated this approach, which you can read about in the article “Is Bitcoin's Price An Independent Variable?” published on Seeking Alpha.

You can see the results of this analysis below.

The fundamental assumption of this model is that the value is in the network. As the number of users increases, so too does the overall activity level. We can see this relationship by plotting users (proxied by unique addresses) against transactions.

So, from a fundamental perspective; if we can quantify the size and growth of the network itself, we can estimate the “fair” value of the network. This doesn’t mean the price will be exactly what we predict, but over the long-term, the price does tend to oscillate around the fair value.

Using the current state of the network, it would seem that even though the long-term direction is clearly up; there may still be further price corrections in the near term. Notice in the past there have been extended periods of time when the predicted price was higher than the actual price. The most recent data point I have collected with this model predicted a price of $2,454 for December 19th, 2018, where the actual price was $3,808.

There are only two ways to close this gap, (1) the price has to come down or (2) the number of unique addresses has to come up. I think we will see the price come down in the short term, but over the next year the number of unique addresses will steadily increase. Eventually, the predicted price will be above the actual price, and the market will turn.

Bitcoin is a topic that has fascinated some of the most brilliant minds of our time. The research that is being done now will have far-reaching effects, but we may not understand the full implications of this work for some time. It is clear that software engineers, academics, businesses and users are being pulled into this Bitcoin ecosystem in droves. The fact that we have seen growth even during times when the price is not increasing would seem to suggest that there’s more to Bitcoin than simply price hype.

Certainly, we saw a speculator exodus after the last bubble burst. But, just like before, Bitcoin has survived this crisis. And just like before iIt will emerge stronger, faster, smarter and larger than it was before.

The field of Cryptoasset analysis, and fundamental valuation of blockchain technology is still very new. Most of the work done has been applied to Bitcoin, because it’s the biggest, the oldest, the most well-known, and has produced the most data to be studied. However, what we learn from studying and modeling Bitcoin will likely be relevant for other fields of study in the future, let alone for other Cryptoassets.

It’s interesting that large financial institutions are now creating entire platforms for “Digital Assets,” such as the newly minted Fidelity Digital Assets. Even Morgan Stanley has called Crypto an “Institutional Asset Class.” Crypto is on the bleeding edge of fintech and Bitcoin is the elephant in the room.