What’s the next target for Bitcoin price?

After a 15% downward correction, many analysts are posting their ideal levels and their thoughts about the pullback. Although massive corrections between 20-30% are not uncommon when Bitcoin is in a bull rally, they could be the first sign of a potential reversal.

Dyme, a popular crypto analyst on Twitter, says he is not yet prepared to go full bearish mode on the flagship cryptocurrency but believes it is likely dropping towards the 0.382 Fib. retracement level at around $13,500.

Dyme’s lowest level for Bitcoin seems to be approximately $5,433, which would still be a higher low than the crash during the coronavirus pandemic.

I'm not prepared to be fully beartarded but these are the levels I'm watching. pic.twitter.com/XMkkNgv5m7

Other analysts are not as pessimistic and believe BTC is doing something similar as it did before the 2017 massive rally to the all-time high. It seems that the Bitcoin price had several 34% corrections after reaching all-time highs throughout 2017.

Quick, before my wife see's me posting.

Never a one way street. pic.twitter.com/Z7THwjZVVb

As discussed in one of FXStreet latest articles, the pioneer cryptocurrency is prone to suffer major corrections during bull rallies. Such pullbacks usually end up lasting a few weeks before the next high. The current retracement is only around 17%, which is significantly lower than the 30-40% nosedives seen between 2015 and 2017.

Therefore, the ongoing correction could either lead to lower prices or it just may not be a major one. 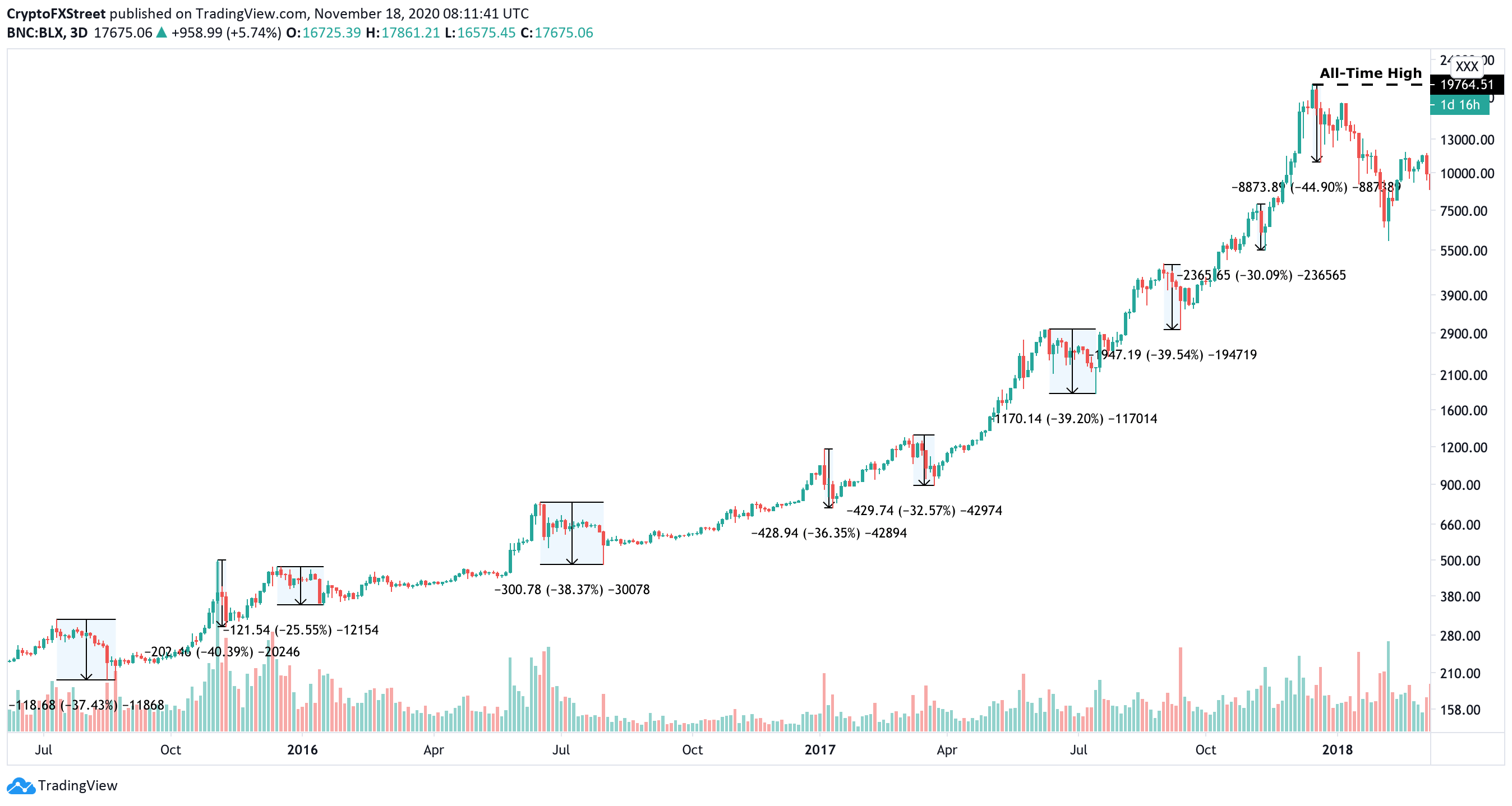 On the weekly chart, the TD Sequential indicator has just presented a sell signal for the first time since June 1, 2020. On the monthly chart, this indicator is also on the verge of posting the same call, in the form of a green nine candlestick. This can be perceived as a major indication of further losses on the horizon. 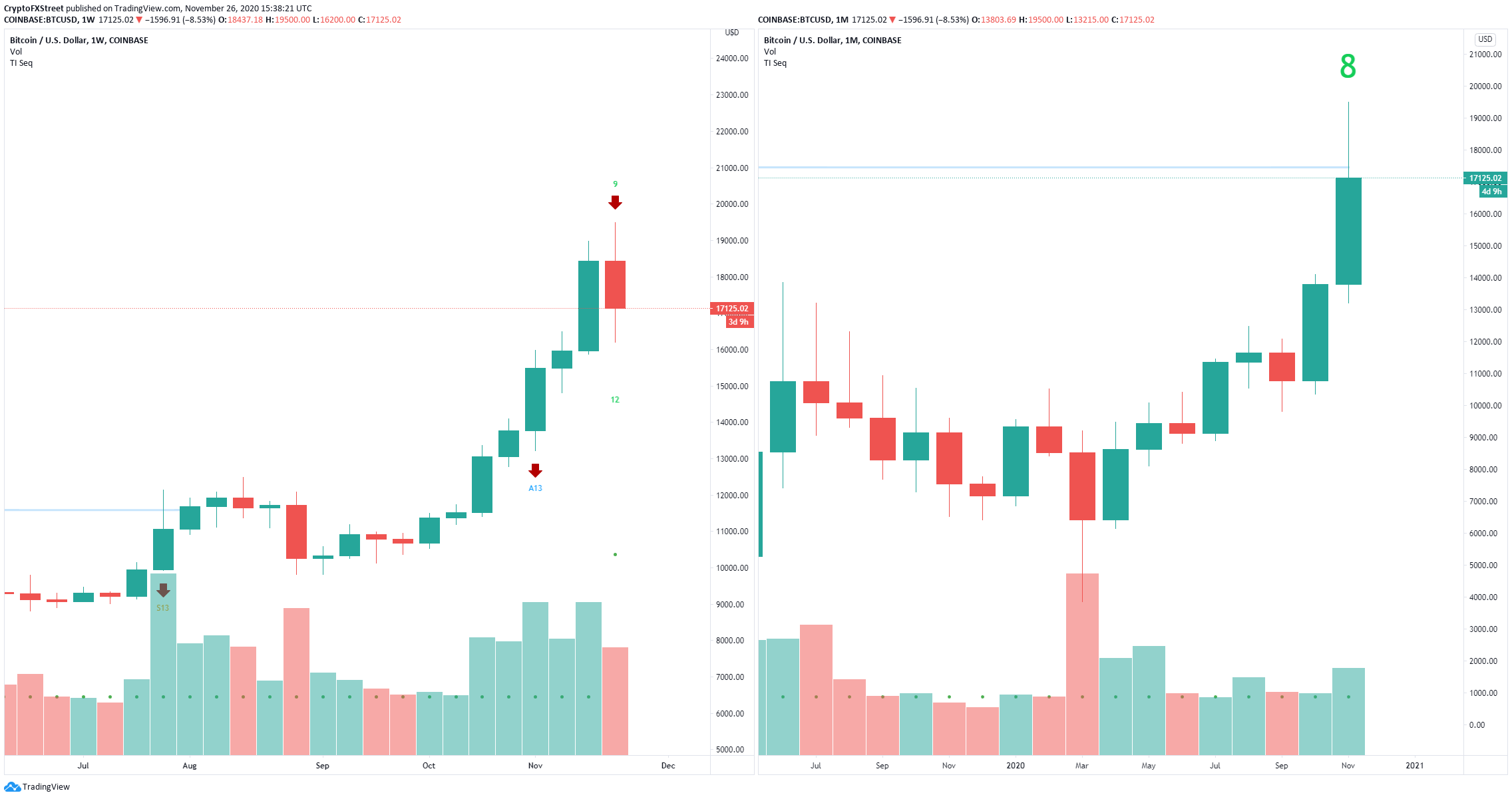 IncomeSharks, another prominent analyst, states that Bitcoin has already dropped into his buy zone, which seems to be located at around $16,000.

Now, the chartist is preparing for a rebound towards $19,000 or higher.

$BTC still looks good to go up. Instead of shorting I'm placing buys in this zone. Hoping to catch a wick if we drop. But for now I'm still buying some here on this dip and think this might hold. Always have a plan where you are glad for the price to go in either direction. pic.twitter.com/IzI0nT1LGa

The In/Out of the Money Around Price (IOMAP) chart adds credence to this theory. Based on this on-chain metric, the area between $16,163 and $16,684 may serve as stable support.

Breaking below this significant demand barrier could lead to the next major support barrier at around $15,417, where over 400,000 addresses bought 275,000 BTC.