Binance Coin price has withstood the heavy selling in the cryptocurrency market in April and illustrates a symmetrical triangle pattern on the intra-day charts. As a continuation pattern, speculators can anticipate a new high in the coming days.

As a general rule, the higher the MVRV ratio (30d), the greater the unclaimed profits. In turn, the higher the risk results with BNB speculators beginning to sell or reduce their exposure. Thus, a high MVRV ratio is associated with overbought conditions, while a negative MVRV ratio is often a timely point to consider accumulating the token. As a percentage, an MVRV over 20% is viewed as the threshold for being overbought.

The ratio has modestly improved but still signals that many speculators hold losing positions and are unlikely to sell, presenting a high probability opportunity.

April has been an exciting month for the cryptocurrency market, marked by a couple of large downswings, carrying some tokens down over 50% from the highs. BNB also declined, but on a relative basis, it has been a leader. Moreover, a glance at the statistics shows an entirely different picture than bearish commentary that has blanketed mainstream and social media.

Binance Coin price is currently up over 75% in April, making it the fourth-best monthly return since July 2017 and the sixth consecutive positive month. Additionally, it closed last week with a gain of over 4%. Definitely, not the numbers of an altcoin in distress.

As mentioned above, Binance Coin price has been quietly illustrating a symmetrical triangle pattern on the 12-hour chart with a measured move target of 33% or $794.95 from the current position of the triangle’s upper trendline. 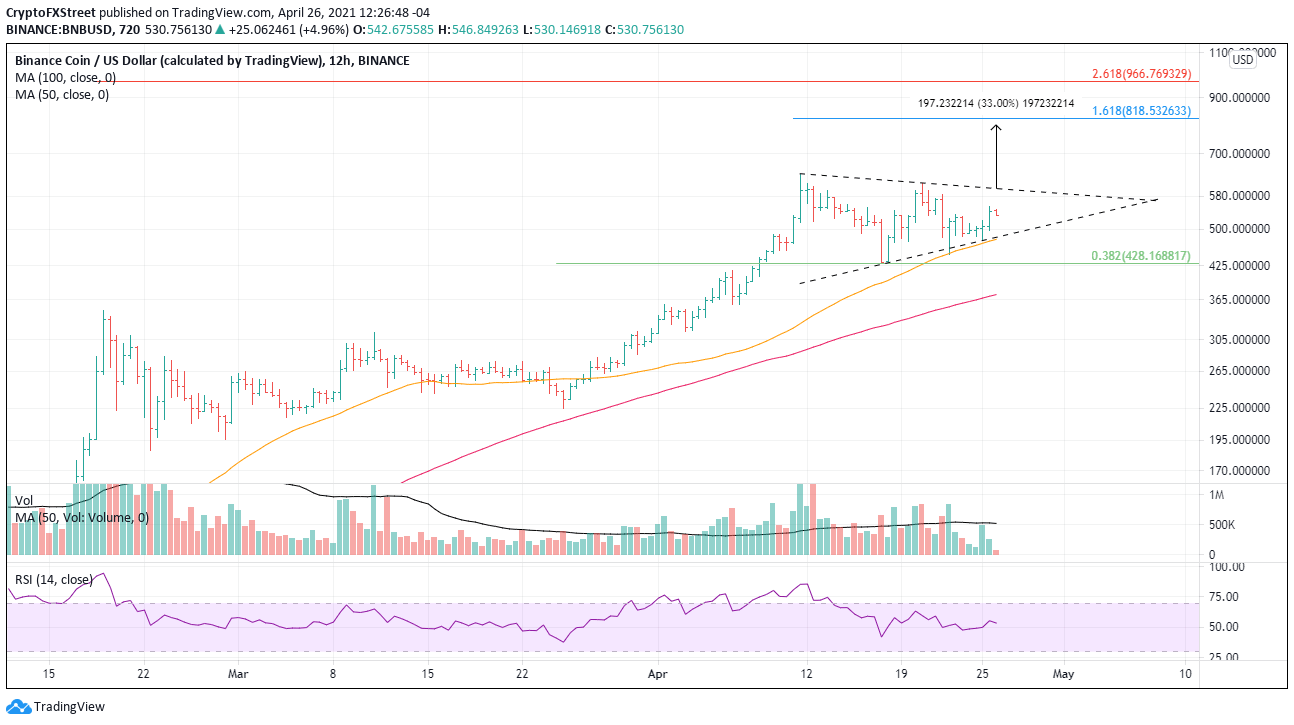 In April, the market conditions have demonstrated that participants need to be prepared for everything, thus making risk management preparations equally important. Critical support is at the intersection of the triangle’s lower trend line at $482.45 and the 50 twelve-hour simple moving average at $478.05. Additional support levels emerge at the crossroads of the April 17 low at $428.79 and the 38.2% retracement of the rally since late March at $428.16.