Ripple capitalizes the good prospects and surges with force. After the takeoff, it quickly got to $0.864, the resistance we mentioned yesterday, and has settled without breaking it. Above, it would find a price resistance congested zone with the psychological mark of $1.00.

Ripple is the main protagonist today, with a forceful upturn. The bullish reaction once it broke the wedge was very quick and it reached its first goal yesterday. Above $0.864, XRP/USD has room for an upwards development until a resistance at $0.958, followed by $1.203 and $1.084 at the range's roof.

Below, the strength of the rise has left few supports. The first one is at $0.74, followed by $0.67, where all the rise would be undone. 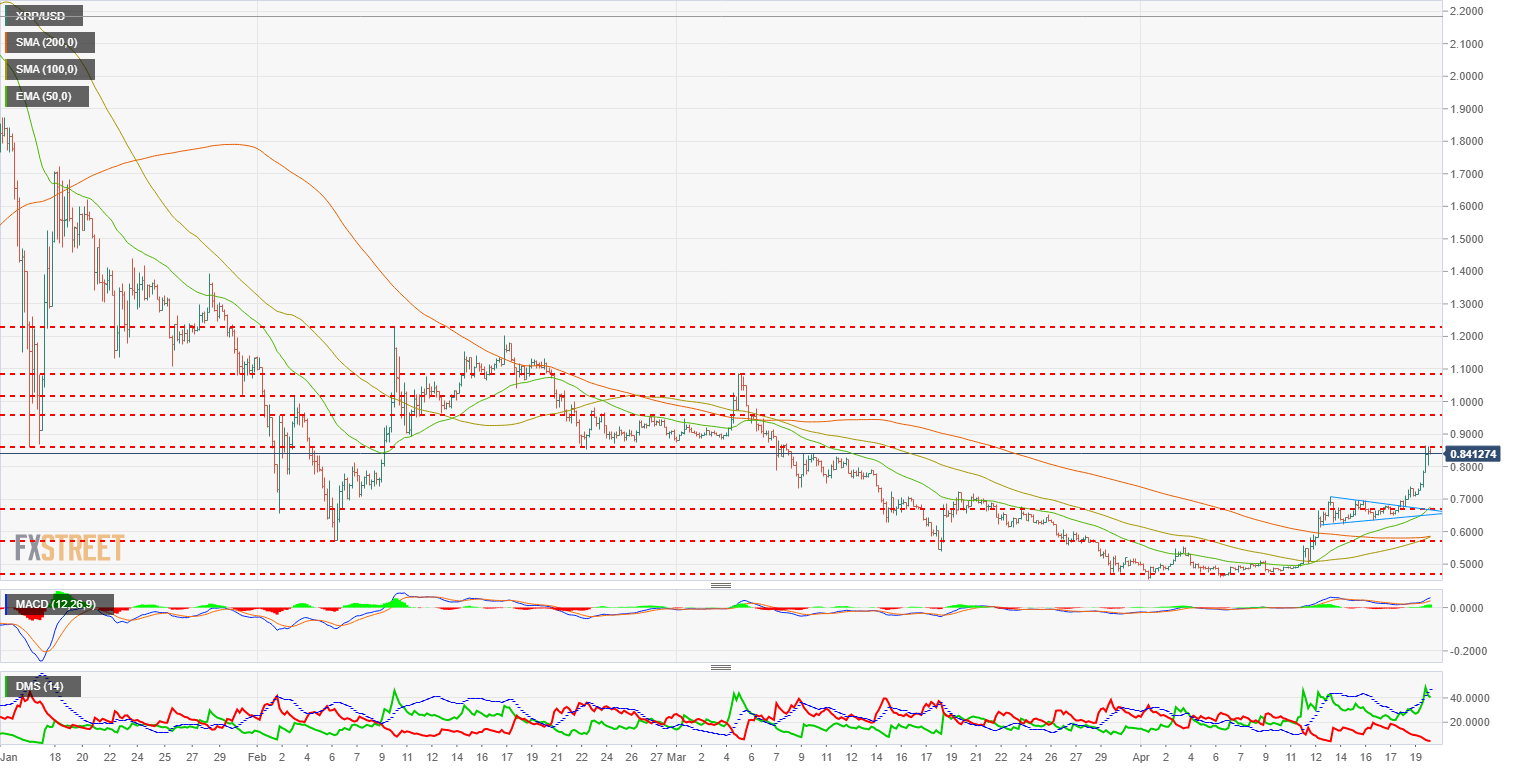 The 240 min. MACD has good slope and line and signal openness, favoring new rises without excluding some excess regulating retreats. Its tone is of bullish continuation.

The Directional Movement Index is conclusive in the sellers' complete retreat after the rise. Buyers have lost momentum too after reaching goals, but the ADX is still in strong trend levels, favoring more rises.

Ethereum has behaved positively lately and has reached yesterday's second resistance at $576. In the early American session, it has already broken it, approaching the next goal at $625. Should it be broken too, the next objective would be around $675, where it would meet a trendline that sets the bearish channel's roof and is the key level to become fully bullish. 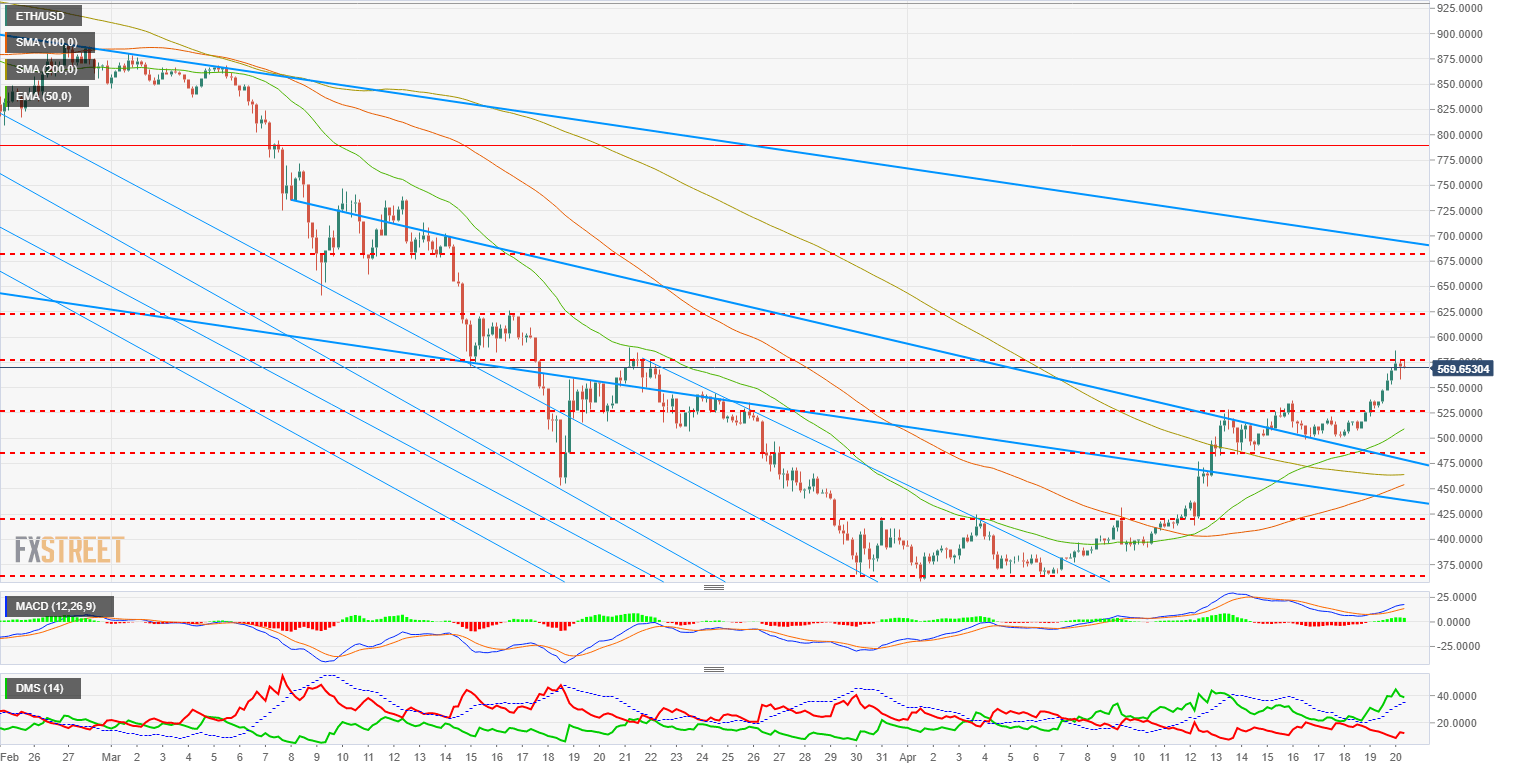 The 240 min MACD shows a possible divergent structure that could fade out if the price keeps rising consistently. A consolidation in the current levels is possible.

Bitcoin has managed to break $8,400 at the expense of a momentum exhaustion. It is in a dense range of supports and resistances that hinders the trend continuity. Above that level, there are resistances at $8,750 and $9,000. Beyond, $9,500 are the main mid-term goal.

Below, there's the current range mid-level at $8,064, and its baseline at $7,800. The moving and exponential averages are within that range, so Bitcoin has many supports to rely on. 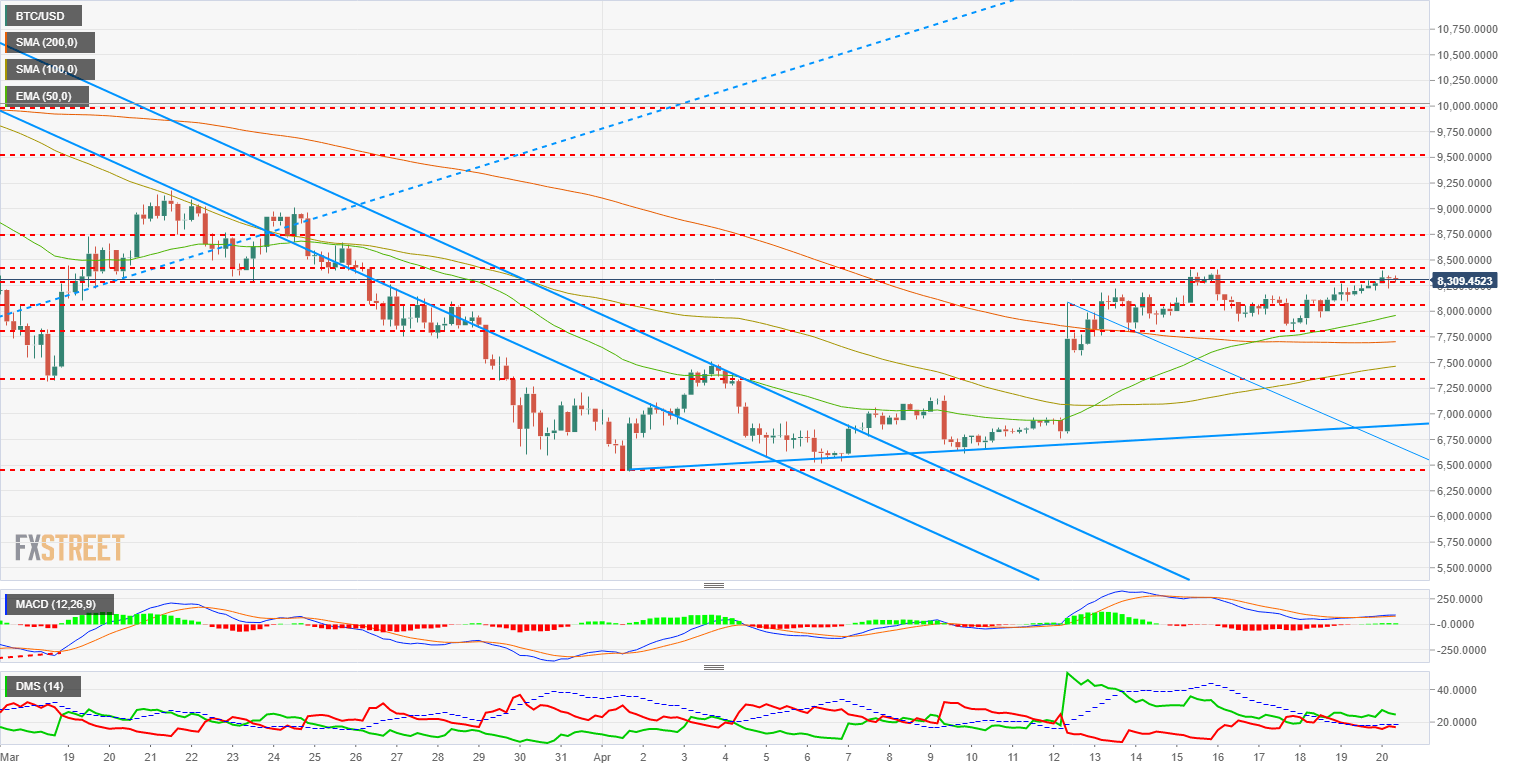 The MACD is very flat, in accordance with the price, and suggests lateral consolidation moves. The scenario is also favorable for a pattern that may increase the volatility to separate the indicators.

The Directional Movement Index shows buyers in a slim control. Sellers are at low levels and haven't appeared after reaching resistances, so the bearish hopes are in downtime. The ADX is below 20 and confirms the lack of tendency.

Bitcoin (BTC) is creeping towards $9,300 on Monday, however, all previous attempts to settle above this area proved to be futile. Bitcoin has stayed mostly unchanged both on a day-to-day basis and since the beginning of Monday, while its market dominance dropped to 62.2%.

XRP/USD glued to $0.2000 after a failed recovery attempt

Ripple's XRP is changing hands at $0.2000, mostly unchanged both on a day-to-day basis and since the beginning of Monday. The coin has been locked in a tight range since July 11 after a retreat from the recovery high of $0.2117.

IOT/USD lift-off to moon begins as $0.30 draws nigh

IOTA is among the biggest single-digit gainers on the day. Most cryptocurrencies in the market remain lethargic in their trading. However, some selected coins are leading recovery including Chainlink, Tezos, NEO and Dash.

Ethereum (ETH) is changing hands at $243.90,  mostly unchanged both on a day-to-day basis and since the beginning of Monday. The second-largest digital asset has recovered above the short-term channel resistance $24.00, however, the further upside has stalled above $243.00.