AXS price is up 100% this week and has logged a bullish engulfing week on the bar charts, confirming the liquidation of weak holders and continuing the rally that has accumulated a 550% gain this month. Based on the Fibonacci layers and the measured move of the cup base formed from April to July, Axie Infinity is primed for higher prices moving forward, despite the headline returns already on every timeframe.

AXS price has exploded onto the cryptocurrency scene with eye-popping gains on every timeframe, pushing the Axie Infinity daily and weekly Relative Strength Indexes (RSI) into extreme overbought territory.

It is a new example of FOMO and the remarkable development for a protocol that draws inspiration from CryptoKitties. As outlined in an FXStreet article on July 13, Axie Infinity is “a blockchain-based trading and breeding game that is built on the Ethereum blockchain.” Instrumental to its popularity is the free-to-play model that has catapulted it past PancakeSwap and other leading dApps in terms of cumulative revenue.

The compelling story is reflected in AXS price, particularly since the June 22 low of $2.78. The breakout from the 77-day cup base on July 6 was confirmation that better outcomes were in the future, and that has been the case, as Axie Infinity has climbed 245% from the breakout of the base.

However, momentum leads to more momentum, opening the potential for AXS price to advance to the topside trend line running from the November 2020 high through the April high. The current position of the Axie Infinity trend line is at $101, representing a 168% return from the current price. 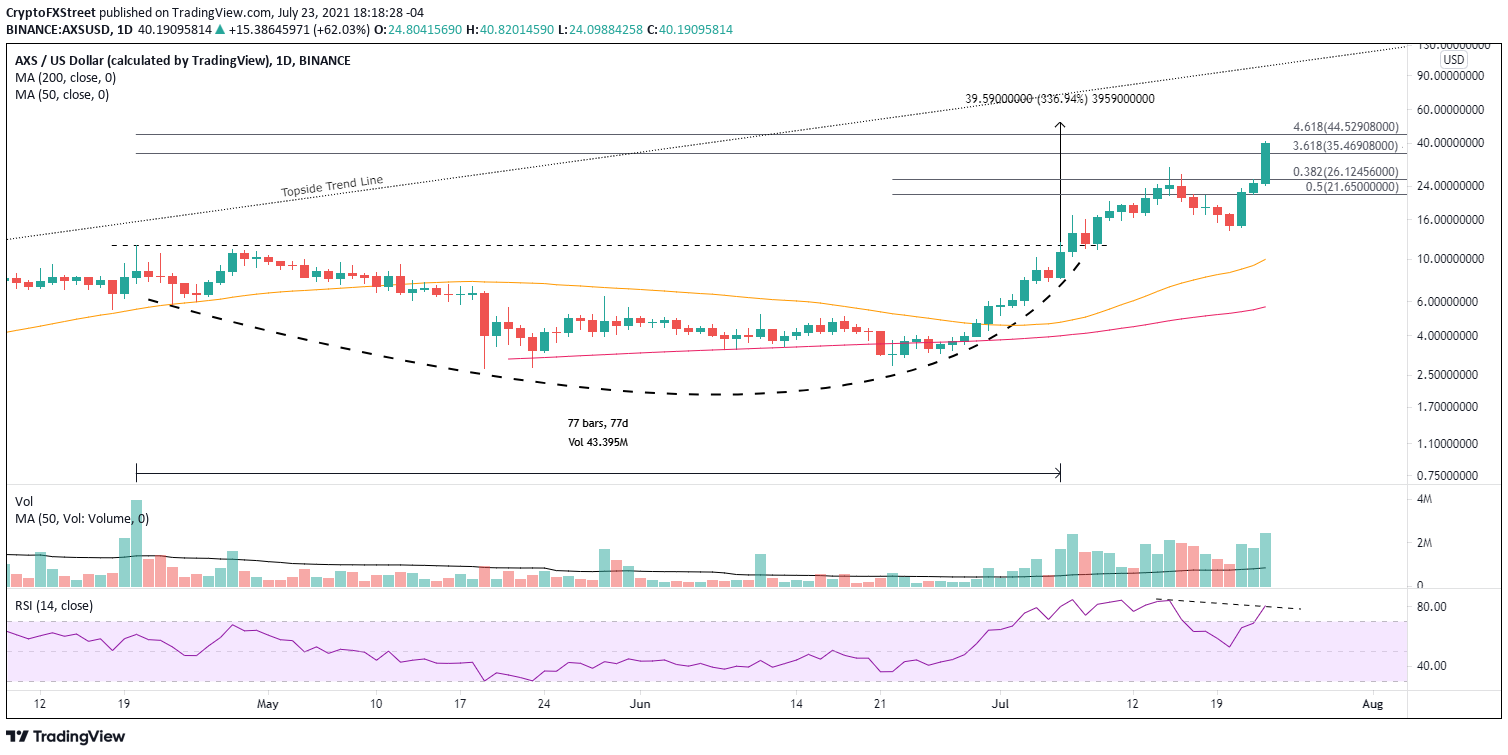 It is important to note that the daily RSI is now flashing a bearish momentum divergence, suggesting slowing momentum for AXS price. Therefore, key Axie Infinity support levels are the July 15 high of $29.86, the 38.2% retracement level of the advance from the May 19 low at $26.12 and finally, the 50% retracement level at $21.65.

Axie Infinity continues to decouple from the cryptocurrency complex with dazzling AXS price gains on most timeframes. The potential for additional gains is high considering the advance’s momentum and the resulting projections from the price structure. Whether Axie Infinity can reach the topside trend line is tough, but the commitment and emotion displayed over the last month suggest it is entirely possible.