The Chinese yuan initiated a strong rally yesterday after China decided to take further steps to support the yuan. Policy makers undertook a set of measures aimed at slowing down the pace of its currency depreciation, which has caused massive capital outflow and forced the PBoC to increase the selling of its massive quantity of US bonds. Indeed, over the course of last year, the yuan fell as much as 7.65%, while China’s foreign exchange reserves fell to $3,052 billion last November compared to $3,330 billion at the beginning of the year. Similarly, the total amount of US debt owned by China shrank by $130 billion between January and October, down to $1,116 billion. However, it seems that this is not sufficient as it barely slowed the yuan’s free-fall. Therefore, since January 1st and in addition to the annual cap of $50,000 per person willing to sell yuan, the new rules have made the US dollar less accessible to individuals as they are required to justify their buying of foreign currencies and are limited from using them in foreign investments.

For now, this approach seems to be working relatively well as USD/CNY returned below 6.90, down 1.20%. However, the pause may be short-lived as previously undertaken control measures only had a limited effect in slowing the yuan's depreciation. Nevertheless, we expect China to continue tightening capital controls gradually because if the PBoC continues to dissipate its FX reserves, this may enhance downside pressure on the yuan. This morning, the renminbi rose another 0.70% against the dollar on the onshore market, while offshore the CNH was up 0.50%, with USD/CNH down to 6.81. The rally may be done for now, but we believe that China is not done yet and will likely reiterate its determination in stabilizing the yuan, which would limit downside pressure. The question is how long will the market stand idle?

According to the released fed meeting minutes, the central bank decided to raise rates in December amid market anticipation on fiscal stimulus. In brief, the minutes also indicates that the path should be more aggressive this year. Markets are still betting on the likelihood of two to three hikes for 2017.

There is significant concern surrounding the kind of fiscal policy program the Trump government will deliver and whether it will open the door to further tightening of the current monetary policy. Fed policymakers are concerned about the effect of fiscal stimulus on tax cuts and infrastructure spending as it could push policymakers to raise interest rates even more aggressively.

Finally, the big unknown is still Trump’s presidency, which starts on the 20th of this month. The President-elect’s threats to General Motors on foreign production has lead Ford to cancel production in Mexico and announce the building of a factory in Michigan. There is surely something to be said about this, Trump’s fiscal policy plan will certainly produce a bombshell effect.

Currency-wise, the dollar has weakened and is trading above $1.05 against the single currency for the first time since the start of the year. 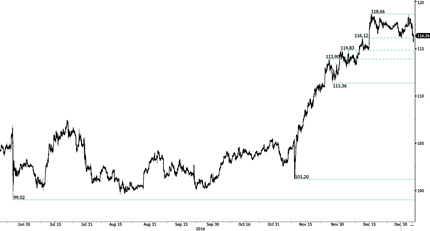 GBP/USD has exited downtrend channel. Hourly support lies at 1.2200 (03/01/2017 low) while resistance lies at 1.2388 (30/12/2016 high). The technical structure suggests further consolidation. Yet, a break of resistance area around 1.2400 is needed to confirm the end of the short-term bearish trend. The long-term technical pattern is even more negative since the Brexit vote has paved the way for further decline. Long-term support given at 1.0520 (01/03/85) represents a decent target. Long-term resistance is given at 1.5018 (24/06/2015) and would indicate a long-term reversal in the negative trend. Yet, it is very unlikely at the moment.

USD/CHF is moving sideways. Hourly resistance is given at 1.0344 (15/12/2016 high). Key support is given at the parity. Expected to further consolidate above 1.0200. In the long-term, the pair is still trading in range since 2011 despite some turmoil when the SNB unpegged the CHF. Key support can be found 0.8986 (30/01/2015 low). The technical structure favours nonetheless a long term bullish bias since the unpeg in January 2015.