The dollar lost ground because the 10-year yield crashed from over 1.72% last week to a little over 1.65% yesterday. Bond yields rise and yields fall when perception changes of the central bank’s intentions, or some other factor gains sudden weight. The WSJ is clueless and attributes the fall to the IMF report last week on the dollar’s falling share of official reserves (that we reported last week). Gimme a break.

We have several problems with the WSJ report. First is the assertion that “Central banks are the largest players in the foreign exchange market, overseeing nearly $12 trillion in reserves, so investors watch their holdings closely.” Central banks do not “play.” The big players are the big banks and hedge funds. Others are big players but sedate to the point of somnolence—insurance companies, sovereign wealth funds. Central banks do not change reserves rashly and rapidly, and they trade FX only when intervening.

Then there is the comment from the head of FX at Goldman, and you have to swallow twice before arguing with Goldman. He says “Several structural trends skew the medium-term dollar outlook in a negative direction, including the widening U.S. trade deficit, China’s financial opening and the European Union’s efforts to create a common bond market for the region.” He has a forecast of a slightly weaker dollar or the next 12 months. Okay, we can take the 12-month time horizon but not a shorter one, like 3 and even 6 months.

Point by point—the trade deficit has been worsening for decades and the dollar moves regardless of it. In other words, the correlation of the trade balance and the dollar is non-existent. See the chart in the Keeper Chart section. China’s financial opening is valid, of course, but China lacks the depth and breadth of financial instruments to compete with the US. The US added over 30 new ETF’s just last year and inflows to ETF’s are over $5 trillion. Start-ups raised $62 billion in the first quarter.

It’s barely conceivable that the bond gang has decided the Fed can indeed fend off tapering/hikes to 2024, or that inflation will be short-lived when we get it. But that is inconsistent with its behavior over the past few years. And check out the yield comparison chart from the WSJ. Only Australia and New Zealand offer a positive return over US Treasuries. The US still wins the yield-seekers. Backing up the firm and rising yield story is the IMF forecast of US growth reaching 6.4% this year, the fastest since 1984. Read that number gain—yes, 1984. 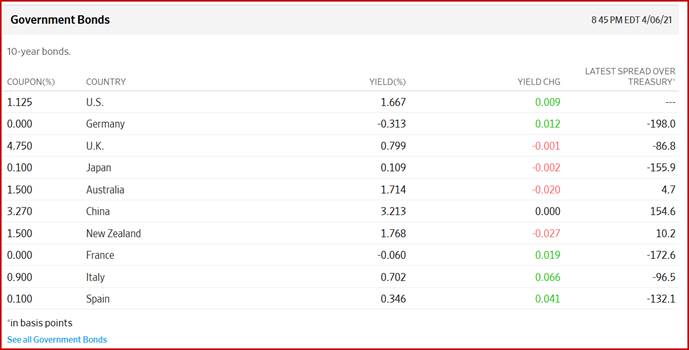 As for the bond yields sliding in anticipation of the Fed minutes this afternoon, that’s a non-starter, too. The Fed has been absolutely clear about its outlook and intentions. The idea that the yield-setters can change its mind may have receded for the moment, but that doesn’t mean acceptance of the Fed’s stance. The bond market has already demonstrated it doesn’t agree with the Fed and expects tapering a full year ahead of the Fed’s schedule. It didn’t just capitulate yesterday for no reason.

As for today’s data, we get the trade balance, sure to be a bigger deficit, the oil inventory report, and late in the day, consumer credit (after the Fed minutes). Nothing much here. While we can’t explain the sudden case of indigestion infecting the bond market, the vigilantes are only taking a breather—they will be back. The data will light that fire.  See the graphic of the service sector PMI from the Daily Shot. Currencies have a long-term positive correlation with growth and the US is the one getting the growth. Well, more growth and sooner. 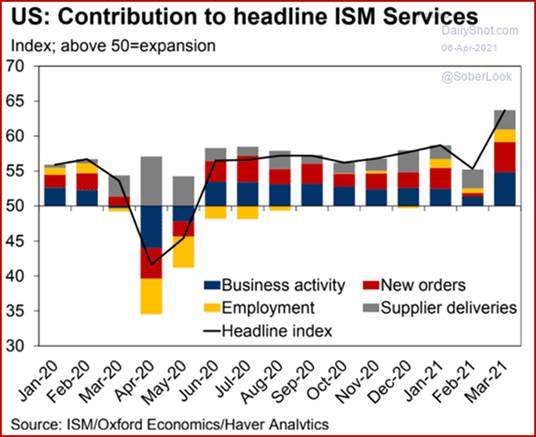 Fun Tidbits: Amazon’s CEO Bezos backs Biden’s higher corporate tax rate and never mind that Amazon pays no federal corporate taxes. In the Georgia voter suppression saga, the Dems have exaggerated the negative effects of new measures. Meanwhile, Senate Republican leader McConnell displays even greater hypocrisy than usual (and that’s saying something) by “warning” big companies to stay out of politics. In the Minneapolis cop trial, never has so thorough and tedious a grilling of witnesses been conducted—but it’s punctuated by gems of top cops and doctors calling it outright murder. Cops hardly ever break the “blue wall” and never before in a case in the national spotlight.