The nonfarm payrolls came below expectations in December. That’s one month – but what about the full quarter and the year? What does a thorough examination of the jobs market mean for the gold prices?

The US created 145,000 jobs in December, following an increase of 256,000 in November (after a downward revision), as the chart below shows. The nonfarm payrolls came below expectations, as the analysts forecasted 165,000 new jobs. The gains were widespread, but with a leading role of retail trade (+41,200), leisure and hospitality (+40,000), and education and health services (+36,000). Manufacturing again cut jobs (-12,000), which means that industrial recession has not ended. Mining and transportation and warehousing also dismissed workers. 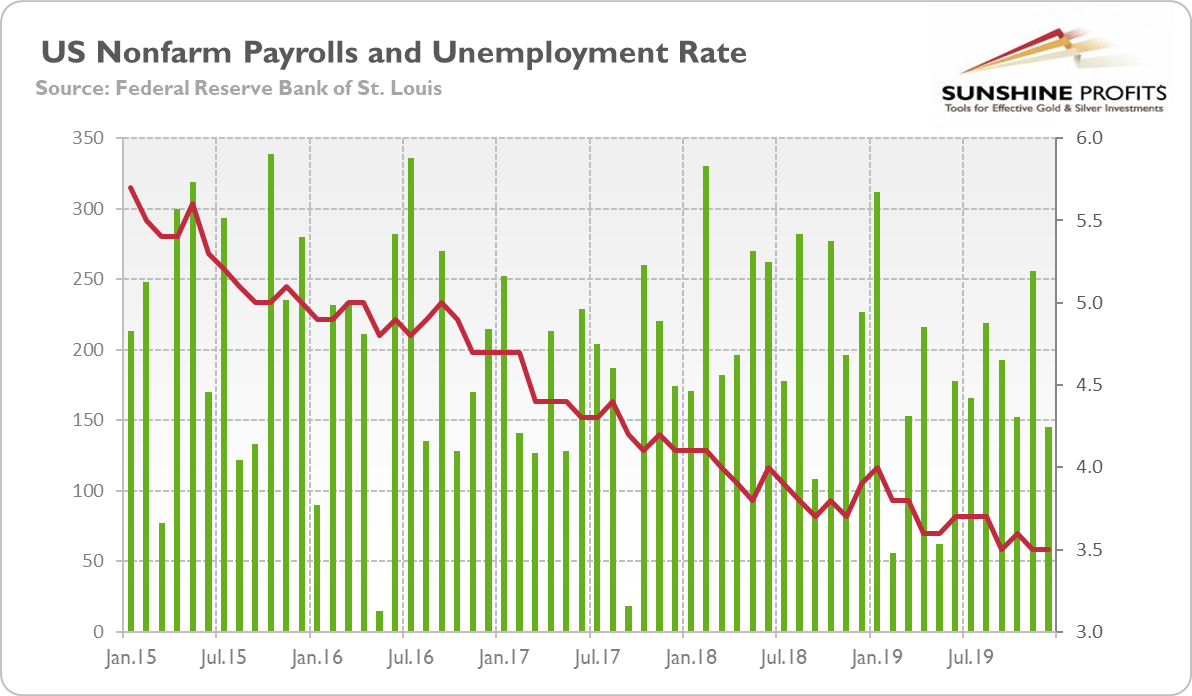 The surprisingly weak headline number was accompanied by downward revisions in November and October. Counting these, employment gains in these two months combined were 14,000 lower than previously reported. Consequently, the job gains have averaged 184,000 per month over the last three months, and 175,000 so far this year – still pretty good but significantly below the average monthly gain of 223,000 in 2018. In consequence, the payroll employment rose by 2.1 million in 2019, down from a gain of 2.7 million in 2018.

Although the pace of job creation has slowed down,the unemployment rate remained unchanged at 3.5, as the chart above shows. So, it is still at the 50-year low and does not send any recessionary warnings.

Last but not least, the low unemployment rate did not translate into significantly higher paychecks. The average hourly earnings for all employees on private nonfarm payrolls have increased only 2.9 percent over the last twelve months, following 3.1-percent rise in November. Actually, the pace of hourly wage growth fell below 3 percent for the first time since September 2018.

To sum up, although the December jobs report surprised the markets on the negative side, the US labor market in 2019 was quite solid.While hiring has slowed,the unemployment decreased from 3.9 to 3.5 percent over the year, while the number of unemployed persons declined from 6.3 to 5.8 million. What is perhaps a bit astonishing is that the wage growth fell to 2.9 percent, which means that despite the ninth straight year of job creation and very low unemployment rate, the wage pressure is still moderate.

But the U.S. labor market is still doing relatively well, which – combined with the lack of strong wage pressure – should make the Fed to keep the interest rates unchanged in the foreseeable future. The fact that the U.S. central bank has no reason to hike the federal funds rateis positive for the gold prices. And indeed, the yellow metal rose on Friday, and weaker-than-expected U.S. jobs data could help here.

But beware! The resilience of the labor market also reduces the odds for a dovish move. Actually, some traders have started to price in the possibility of the interest rate hike by the end of 2020, which could harm gold. Indeed, the minutes from the last FOMC meeting indicate that the Fed officials become more optimistic about the U.S. economy in December as trade tensions with China eased, while the global economy stabilized somewhat.

Thus, while many saw the risks as tilted somewhat to the downside, some risks were seen to have eased over recent months. In particular, there were some tentative signs that trade tensions with China were easing, and the probability of a no-deal Brexit was judged to have lessened further. In addition, there were indications that the prospects for global economic growth may be stabilizing.

And the fresh remarks from the Fed officials have become even more optimistic since their last meeting. We do not expect them to return to a hawkish mode – especially in light of the liquidity crisis in the repo market – but the change in rhetoric should not be neglected by the gold investors.