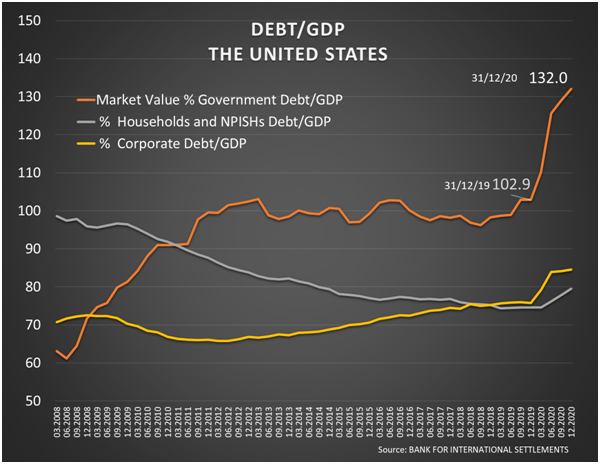 The large increase in debt needs to be addressed. Policymakers such as the FED are well aware of this. The important issue in the next decades is that the denominator of the DEBT to GDP fraction, i.e. the rate of GDP growth should be higher than the numerator, i.e. the rate of DEBT growth.

The higher the growth rate than the debt growth rate, the more manageable the debt becomes. Achieving this balance requires the right strategy. Maybe this strategy includes the following:

A strong and sustainable growth rate requires today full employment while a low debt growth rate requires low-interest rates which in turn require relatively low inflation. So, the preconditions are: reducing unemployment and keeping inflation at manageable levels. Uncontrolled inflation will force the central bank to raise interest rates, which will result in the closing of the “tap” in companies and the management of the existing debt much difficult. 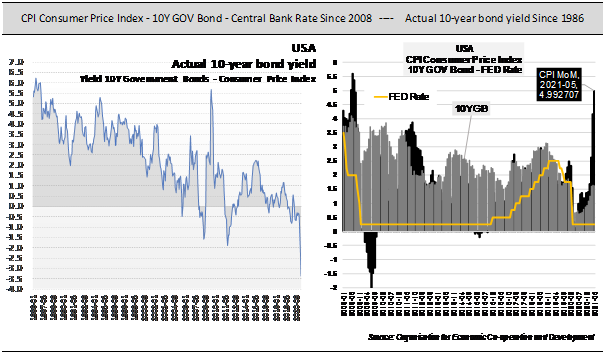 This raising in inflation, if maintained, will have two negative consequences. One will be to put pressure on the FED to raise lending rates and the other will be that as real interest rates will be strongly negative, (as now on the monthly basis if remains there, 10-year US Government Bond Rate is lower than -3%) investors will have no incentive to invest in bonds. So, the duration of the phenomenon is a critical parameter. The US Federal Reserve seems to estimate that the phenomenon of high inflation will be temporary, as it had stated that as the economy after the pandemic returns to normal, it expected and expects higher inflation in the near future but for a short time duration.

In reality, the sharp rise in prices and therefore the observed rise in inflation was an inevitable side effect of closing the economy to eradicate the coronavirus, so although larger than expected, it is not entirely unexpected. The larger increase, as well as possible persistence in high levels of inflation for some period, is maybe due to the supply chain shock. Until the supply chain returns to normal conditions, it will take time for inflation to return to normal.

Nevertheless, the Federal Reserve will not change its interest rate policy. Its primary goal is to continue to focus on employment and to keep interest rate policy favourable for as long as necessary to ensure that growth is maintained by returning the economy to full employment. So the so- called "easy money", which is intended to encourage economic activity, will probably continue to go to businesses, thus supporting their equities.

Business support is essential as recent job reports show that employment levels are lower than expected in both April and May as many millions of Americans remain out of work. Fed Chairman Jerome Powell has repeatedly said that he is focused on returning to full employment and that his policy towards this goal will not be affected by temporary increases in inflation. After all, given that inflation has been very low for the last 10 to 15 years, the Fed will tolerate higher inflation than the target of 2% for a moderate period of time.

In conclusion, there are three key points that we should keep in mind.

1. The first is that the FED is not possible to change its interest rate policy in the near future while it can tolerate high inflation for some time, given that it considers it highly expected due to the pandemic.

2. The second key point concerns employment as this will be the critical factor that in the future may lead the Central Bank to change its interest rate policy by going to an environment of rising interest rates.

Thus, a lot will depend on how fast the economy will create jobs and growth, as well as how quickly inflation will return to the 2% target. Until the above is achieved, businesses and therefore US Markets will continue to be supported by the Central Bank.

The aim of the central bank is when the conditions for full employment will be created and therefore there is strong sustainable growth, then to reduce the so-called easy money, and thus, to create conditions for a change of policy and a gradual increase in interest rates. Then, in these conditions of economic growth, with full employment, inflation will be able to be manageable, while economic growth will support businesses. All this mix can make the debt to GDP ratio viable and thus guarantee economic stability and growth.

The balance between the variables of full employment, inflation, and interest rate policy will be the big question for the Fed and the markets. The more satisfactorily this equilibrium is achieved, the lower the risks in the US and world markets and the higher the returns on them.