One of the most important recent developments in the world of finance was the September liquidity crisis in the U.S. repo market. As a reminder, the repo market is where borrowers borrow cash from lenders against collateral in the form of safe securities such as government bonds. As we wrote in the Gold News Monitor, the U.S. overnight repo rate, which is the rate demanded to get cash in exchange for Treasuries for 24 hours, shot up from slightly above 2 percent to as high as 10 percent.

In response to this liquidity shortage, the New York Fed announced that it would conduct a $75 billion overnight repo operation every weekday until October 10, 2019, plus three 14-day repo operations on September 24, 26 and 27. The panic has been contained, while the interest rates came back to their more normal levels. Mission accomplished, right?

Not so fast! On October 4, the New York Fed said that it would extend the overnight and term repurchase operations until November 4, 2019. And on October 11, the FOMC announced that the Fed will purchase Treasury bills at least into the second quarter of next year and will conduct term and overnight repurchase agreement operations at least through January of next year. So, everything is fine, but the repurchase operations will last longer. The GDP is growing at a decent pace, while the unemployment rate is at the lowest level in 50 years, but the Fed expands its balance sheet and cuts interest rates. Something stinks here, dear Watson!

And we know what! It’s the smell of bursting bubbles. It’s the odour of recession. It seems that the Fed tries to keep the excessively leveraged financial market afloat and prevent its meltdown. At the same time, the U.S. central bank does not want to encourage an even more excessive risk-taking. It reminds us of the 1920s, when the Fed wanted to stimulate the real economy and prevent the stock market bubble at the same time. But it was impossible, as the money quickly flew into the asset markets. There is no eating and having one’s cake too. There is no squaring the circle. You cannot support the financial market and curb its risky activities. This would not end nicely. You cannot intervene in the market without spurring some side effects. This is why the Fed’s monetary policy is doomed to fail. All the Fed’s tightening cycles ended badly with the sole exception of the 1994 experience. And this time will be probably no different, despite the recent dovish U-turn.

The repo crisis clearly shows that liquidity is substantially lower, while risk and debt accumulation higher than estimated. Market players have to be more leveraged than previously thought and thus reluctant to take more risk and lend cash against Treasuries at the current ultralow level of interest rates. Who knows: maybe this is the beginning of the burst of the bond bubble?

Anyhow, problems accumulate and the Fed is likely to resume the quantitative easing. Powell does not, of course, want to admit it. At the September press conference, he mumbled something about “assessing the question of when it will be appropriate to resume the organic growth of our balance sheet.” On October 8, Powell promised that “my colleagues and I will soon announce measures to add to the supply of reserves over time.” However, he added that “this is not QE. In no sense is this QE.”

He is right in one thing. The scale is smaller. As one can see in the chart below, under QE1, the Fed bought securities worth around $1.2 trillion over eight months, or about $150 billion per month. Now, the US central banks conducts $75 billion repo operations. But it has very little to do with organic expansion. In the four year prior the Great Recession, the Fed’s balance sheet was increasing by about $2.6 billion per month on average. So, if it looks like a duck, swims like a duck, and quacks like a duck, then it probably is a duck. If the recent expansion of the Fed’s balance sheet looks like the quantitative easing, it is quantitative easing, and not ‘organic growth’. 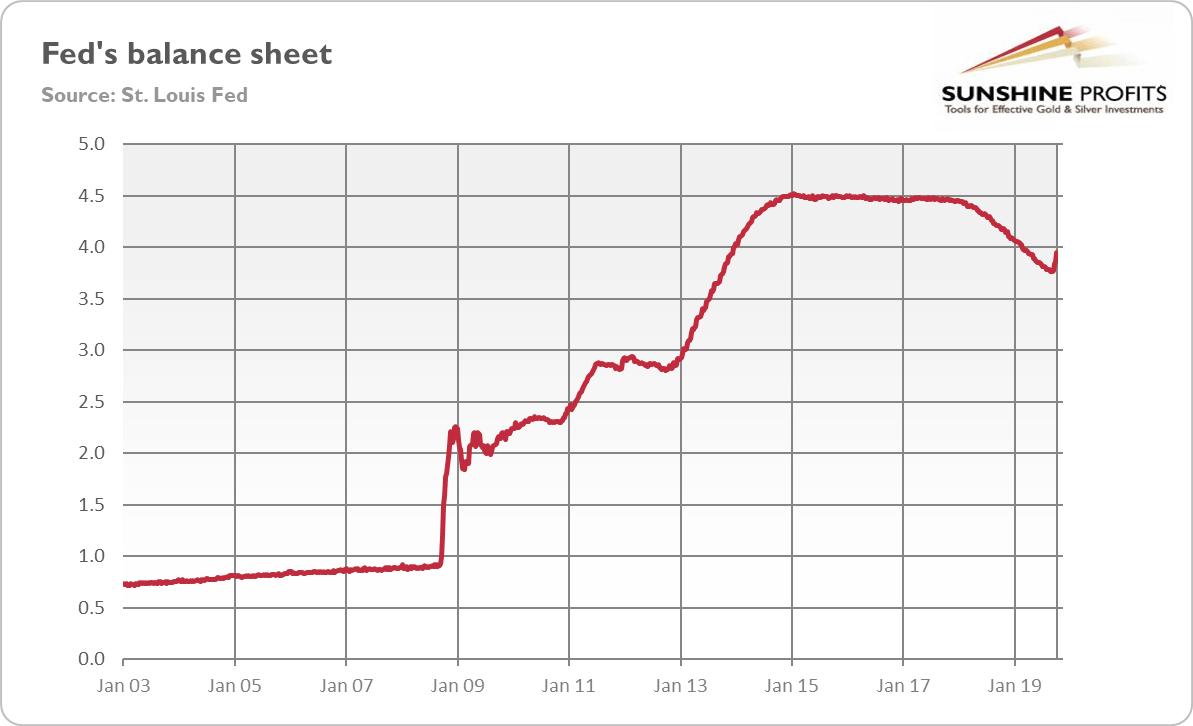 What does it mean for gold prices? The next round of QE should be supportive for the yellow metal. You are right that not all rounds were positive for the bullion. For example, the QE3 increased confidence among investors and sent gold prices lower. However, the upcoming expansion of the Fed’s balance sheet will occur in the period of high trade uncertainty and elevated recessionary risk. So, it should be more supportive for gold, especially if it translates into weaker U.S. dollar (which is, however, not so certain, given the sheer scale of various monetary operation of other major central banks).