As living standard rises in China, its global contribution continues to increase. And that means potential for growth, poverty reduction and prosperity in emerging and developing world - new hope.

When Chairman Mao Zedong proclaimed the founding of the People’s Republic of China (PRC) on October 1, 1949, the Chinese people could finally begin to leave behind a century of colonial humiliation and start building a new life.

What remains so poorly understood is how dire were the conditions on that extraordinary day, seven decades ago. While China had sustained its triumph, Chinese living standard was barely 5 percent relative to the United States.

It was a dire starting point.

After Mao’s establishment of sovereignty, foreign minister Zhou Enlai's “Four Modernizations,” and Deng Xiaoping's the “reform and opening” policies and Special Economic Zones (SEZs), China became the member of the World Trade Organization (2001). That paved the way to a decade of export-led double-digit growth and the ongoing the shift to post-industrialization, which has been accelerated under Xi Jinping’s leadership.

Following the reforms, Chinese industrialization peaked between the late 1990s and the 2008 Western financial crisis. Now the rate of growth is decelerating, which has been the norm to all industrializers from Great Britain in the 19th century to America in the 20th century.

In China, deceleration is a sign that rebalancing toward consumption and innovation by 2030 is on track.

Nevertheless, Chinese living standard continues to climb steadily. It is today about a third relative to the US. In other words, it has multiplied six times relative to American living standard, thus supporting the rise of the world's largest emerging middle-class (Figure 1). 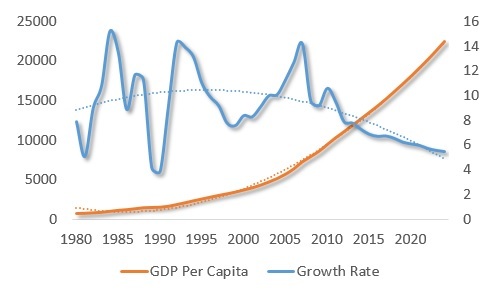 Only since the late 20th century, global economic integration - trade, investment and finance - has begun to benefit large emerging and developing economies. To be sustained, globalization cannot serve just a few wealthy advanced economies, which no longer fuel the global economy. It must also serve poorer and faster-growing economies, which today account for most global growth.

While advanced economies are flirting with protectionism and tariffs, the latter are precisely the wrong policies in the wrong time. As advanced countries have fallen into secular stagnation, they desperately need growth. The rise of poorer economies is not a win-lose game. It also benefits advanced economies.

In the aftermath of the 2008 crisis, all major advanced economies would have fallen into the second great depression without the support of large emerging economies, particularly China. By 2050, the contribution of these countries to global GDP growth is expected to climb to 80 percent.

In the 1980s, the share of U.S. in the world economy was more than 20 percent; in the past four decades, it has steadily declined to 15 percent. At the same time, China’s share has soared from 5 percent to 20 percent. While these (purchasing-power-parity) indicators inflate the pace of progress, the trend lines do herald a coming structural shift in the world economy (Figure). 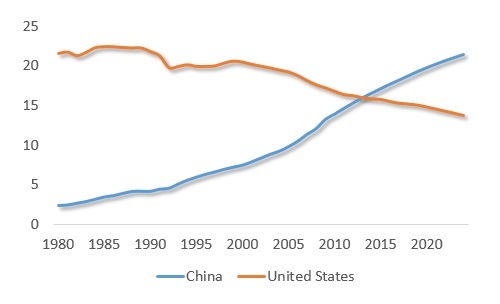 In particular, China’s Belt and Road Initiative (BRI) can redirect domestic overcapacity and capital for regional infrastructure development to improve trade and relations with Southeast and South Asia, Central Asia, the Middle East and Europe – even across Americas and Sub-Saharan Africa.

The BRI seeks to accelerate modernization in emerging and developing economies, with the participation of advanced nations. Yet, in recent months, Washington has charged the BRI for "debt traps" It is a flawed effort at distraction.

If anything, BRI projects seek to promote more inclusive global economic development. Certainly, China will make its share of mistakes, but it has a track-record in learning quickly from those mistakes.

In the postwar era, Washington and its allies had an opportunity to lift the Third World from abject poverty. Yet, success stories involve mainly those Asian economies that ignored the West's growth lessons, which were too often coupled with conditionality, debt and dependency, in the name of "structural adjustment."

Unlike Marshall Plan, the BRI does not require participation in military alliances. It is not predicated on still another Cold War. It does not seek self-interested economic sanctions against the rest of the world.

Nor does the BRI practice regime change to force its will on the international community. It is focused on 21st century global economic development.

Dr. Dan Steinbock is the founder of Difference Group and has served at the India, China and America Institute (US), Shanghai Institute for International Studies (China) and the EU Center (Singapore).

A shorter version of the commentary was published by China Daily on May 6, 2019.