You are creating new money. Lending creates money out of nothing, and that money is deposited somewhere, creating deposits.

Check out the following chart.

Total credit owed vs base money 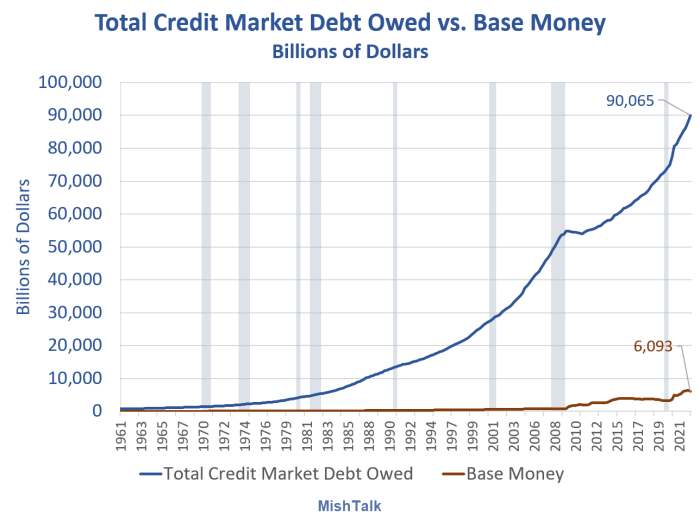 Total Credit vs Base Money, data from St. Louis Fed, chart by Mish

The Federal Reserve defines the Monetary Base as "The sum of currency in circulation and reserve balances (deposits held by banks and other depository institutions in their accounts at the Federal Reserve)." 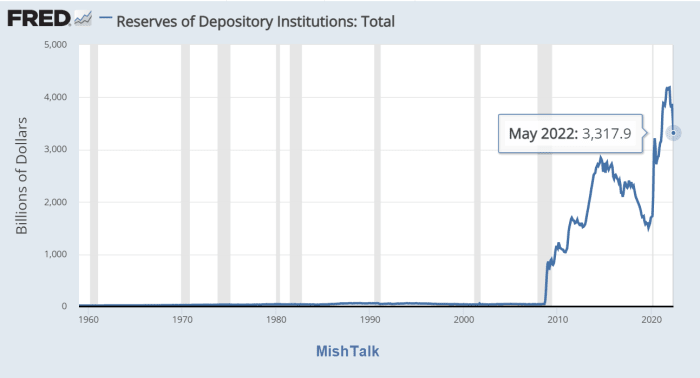 Bank reserves were 3.3 trillion as of the end of May.

They are a function of QE.

Via QE, the Fed shoved money down the banks' throats which the banks park back at the Fed an collect interest.

The Fed pays interest on all reserves. At the end of May, the total reserves were $3.318 trillion.

If the Fed hikes to the range of 2.25-2.50 percent in July as expected, then expect IOR to jump to approximately 2.40 percent.

The IOR keeps rising but the reserve balances keep declining.

That $79.63 billion reflects a hike that has not taken place yet. If the Fed keeps hiking at a pace that exceeds QT, then the amount will rise further. If not, the actual amount of free money will drop.

1: Bank cannot be capital impaired (too many bad loans)

2: People or corporations want to borrow

3: The bank has to think the loan will be paid back (believe the customer is a good credit risk)

The bank may very well be wrong about point number 3, but it will give a loan if it believes the customer is a good risk (or that the asset value will rise if the customer defaults)

Think about point 3 and the housing crisis. Banks knew damn well they were doing liar loans, but they did not foresee a housing price crash or people walking away from homes

Bank lending creates money that did not exist before. To the extent that any "reserves" are needed, the Fed can manufacture them at will and then some via QE as the above chart shows.

Reverse repos hit a new record high of $2.33 trillion: Plus a Q&A on free money

I discussed free money and also Reverse Repos in Reverse Repos Hit a New Record High of $2.33 Trillion: Plus a Q&A on Free Money!

This post is a follow-up to the above after a reader asked what money do banks lend.

I also added a note to the above post to state that it was primarily non-banks, especially money market funds that take advantage of the Reverse Repo Facility.

These are reader questions and my responses.

Q: I just don't get, though, how temporarily selling treasuries & MBS to banks for short periods allows the Fed to keep the Fed Funds Rate in its target range?"

A: Deposits are liabilities of banks. As silly as it sounds and I do think this is silly, banks have to maintain capital on these deposit liabilities.

At any rate, banks will act to get rid of this excess cash "reserves" (a perverse term)  and they do that by buying any short term asset they can, typically short dated treasuries.

When the Fed had interest rates near zero, competition for short-term treasuries was so intense, it was driving the overnight rate below zero. Not only did this force rates below the Fed's target rate, it also put them in negative territory, and nearly broke every money market fund unless the funds started charging interest on deposits!

In response, the Fed started offering nonbanks access to the repo facility whereas before it was only to banks and market-makers like Goldman Sachs.

Bernanke understood this would happen and lobbied Congress for the right to do this and Congress obliged.

Rather than get rid of enough of these "excess reserves" (a term no longer used probably because it points a finger at the Fed) the Fed does Reverse Repos and pay interest on reserves.

The Fed needs to do this to force "up" rates at the low end of the curve because the impact of QE is to force rates lower, below the Fed's target.

That's what competition for short-term treasuries has done to the market. "The system is functioning as designed" stated the Fed. And I mocked that design in my previous post.

What the Fed should do is drain all this damn QE as fast as it can. Instead it is dragging the process out for years.

Q: If banks aren't lending my bank accounts, term deposits etc., then how does my money at the bank make it into a loan?

Deposits are a liability.

The only reason some banks actively seek deposits is they can park deposits at the Fed for higher rates than they are paying on the accounts. The big banks have so much QE they don't even bother trying to attract small depositors. Small peon deposits are more of a nuisance.

Smaller lenders also hope that the deposit customers they attract become borrowers at some point.

A: We will have another round of asset deflation, in fact, it's started. Whether that leads to CPI-measured inflation is another question. But if you properly throw housing  into the equation it sure seems likely.

Historical perspective on CPI deflations: How damaging are they?

It's asset-price deflation that matters. I have written about this many times. Please see  Historical Perspective on CPI Deflations: How Damaging are They?

A BIS study concluded "Deflation may actually boost output. Lower prices increase real incomes and wealth. And they may also make export goods more competitive. Once we control for persistent asset price deflations and country-specific average changes in growth rates over the sample periods, persistent goods and services (CPI ) deflations do not appear to be linked in a statistically significant way with slower growth even in the interwar period."

The central bank battle against beneficial routine deflation has started once again to create the very deflation that central banks ought to fear!