S&P 500 wasted another good opportunity to rise – one where the credit markets were largely aligned. Is it a sign of upcoming tremors that the 500-strong index couldn‘t defend the daily gains? Commodities weren‘t under pressure, the dollar wasn‘t surging (looking at the closing prices), precious metals did well, and even lumber enjoyed a white candle again.

Inflation expectations retreated, and so did Treasury yields – what‘s holding stocks then? Neither uncertainty about the Fed policy, nor surging inflation cutting into P&L, nor crashing bonds – what we‘re seeing is run-of-the-mill volatility as stocks move both into a structurally higher inflation environment, and await Fed moves which are much farther down the timeline than the markets appreciate. Heck, even the option traders keep undergoing the earlier announced shift to complacency.

Yes, the taper talk has dialed back the inflation trades to a degree but hasn‘t knocked them off in the least. In a reflation, both stocks and commodities do well, and we‘re still far away from worrying about weakening GDP growth rates (today‘s ADP and unemployment data are good proof thereof) – in my view, worries about inflation not retreating nearly enough during this Treasury market lull (taking up this summer) would come into the picture first.

Reopening trades aren‘t over, the housing market activity (housing starts, new home sales) has slowed down a little while XLRE keeps running, financials remain as strong as value (yes, there is more juice in that trade still), and no mad rush into tech (growth) is underway. Capacity utilization isn‘t at the top of the pre-corona range exactly, and oil prices (these serve as additional tax, a drag on the economy) aren‘t biting nearly enough. The job market isn‘t at the strongest either, and the hours worked don‘t match prior extremes either. Last but not least, global supply chains haven‘t entirely recovered to meet the reopenings-boosted demand.

Plenty of extra reasons why I talked about the transitory vs. getting structurally elevated (unanchored) inflation yesterday:

(…) The Treasury market‘s lull only means that inflation trades have been dialed back somewhat, but haven‘t been broken. As I wrote on May 27, so far it‘s only the precious metals that are relentlessly calling the Fed‘s bluff – by rising almost in a straight line. And when you thought the transitory or permanently elevated inflation debate couldn‘t get any more ridiculous, there comes the Dudley dove talking how transitory could become permanent – it‘s almost as miraculous as being half pregnant.

Seriously, it‘s a testament to the Fed communication‘s success that the transitory story has been swallowed hook, line, and sinker to this degree. We‘re getting a temporary reprieve but the cost-push inflation isn‘t going away. At the same time, we‘re in a deflationary period before inflation starts biting noticeably more.

How close before the wheels come off, and would that come from inflation or growth worries? There are two distinct possibilities: GDP growth and its projections start sputtering, or inflation (including inflation expectations) don‘t come down nearly enough as much as the transient camp believes. I‘m in the latter camp.

Timing is everything, though. Any growth scare wouldn‘t materialize before we „discover“ that inflation isn‘t really going away. Add the job market pressures entering the fray – discussed on May 19 – you‘ll sooner take fright over persistent inflation hitting the growth prospects than seeing them downgraded first. No deflationary scare quarters ahead either, sorry – 2021 will be another good year in stocks.

This also speaks against a sharp (think 10% and higher) correction in the stock market over the summer, and likewise affects commodities. These would employ a wait-and-see approach, with precious metals sticking out like a sore finger. Forget the taper dog and pony show. When the Fed is forced to move, precious metals win – either way.

In other words, we‘re undergoing stock market and commodities‘ gyrations as we‘re settling into the new reality of higher inflation including expectations, which isn‘t yet putting the stock market to test. Neither the 10-year yield rising way over 2.5% would derail the stock bull run – but the associated volatility would be keenly felt already at the 2% level. We‘re very far from that, meaning I am not worried about the stock market leadership baton passing exclusively over to tech (growth) stocks. That would equal panic.

Gold ascent is slowing down, but miners don‘t support a lasting downswing. Volatility around the $1,900 mark, yes but a plunge on stock market downswing / Fed tapering/commodities reversal, no – as if any of the three actually applied. After initial selling when liquidity needs to be raised no matter where from (the AMC saga coming soon to a theater near you), gold is likely to recover and faster than silver (the white metal would suffer from any marked slowdown in inflation, I must add).

Crude oil rose strongly once again, and so did the oil index – the energy sector ETF is doing great. The daily chart still remains bullish, offering no clues of a reversal, let alone of a correction.

Bitcoin and Ethereum recovery goes on, and I‘m looking for more base building before the bulls take on and overcome the red ETH resistance line featured on Tuesday. Patience is needed before more confidence returns into the sector. 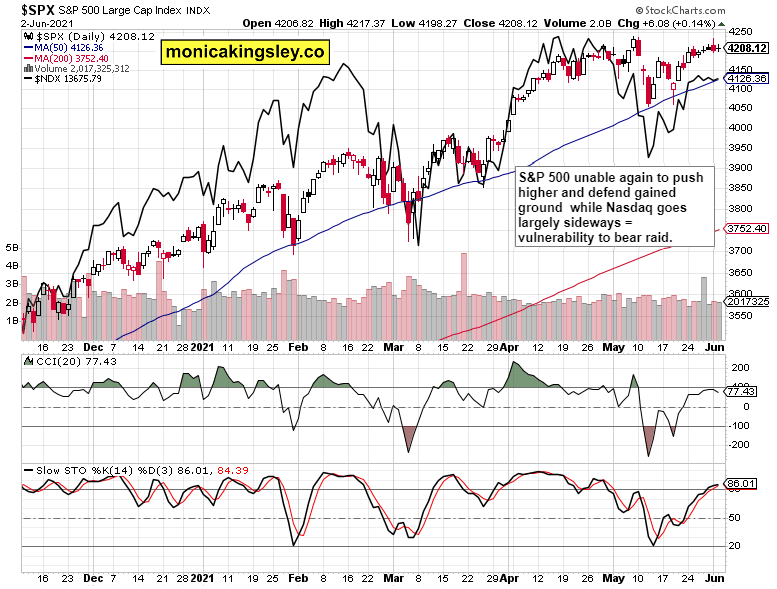 S&P 500 and Nasdaq wavering in latest days is an eloquent warning sign that the bears will try their luck – and they would ultimately fail.

Technology had a mixed day while value remains unyielding. It‘s true that the daily leadership was with XLK yesterday, but that still remains white noise as value isn‘t yet down and out. Not by a long shot.

Gold rose a little stronger than the miners yesterday, but the move in either shouldn‘t be overrated. While the yellow metal can‘t break higher with confidence now, its dips remain to be bought.

The copper to 10-year Treasury yield ratio stabilized yesterday, but the swing in either copper or long-dated Treasuries spells no short-term calm. 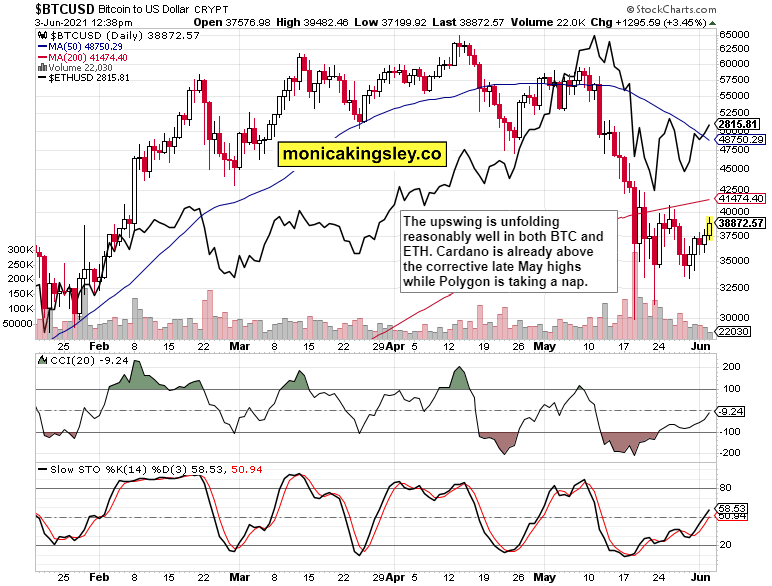 Bitcoin and Ethereum charts are solidly recovering, but some breather next wouldn‘t surprise me. Overall, the stage remains set to go higher.

What doesn‘t go up, must come down – but look for any S&P 500 downside to be largely bought when the dust settles.

Gold and silver remain well bid, but the slowing pace of gains means that the bears might come out from hibernation – only to be repelled though. Look for copper to stabilize as a precondition, with miners not falling through the floor.

Crude oil odds favor a new upleg to proceed, but unless commodities and metals rebound, black gold would get vulnerable.

Bitcoin and Ethereum are peeking higher, and rebound continuation is more probable than other scenarios.