The Fed is expected to leave policy unchanged and again play down taper talk. Nonetheless, markets will be looking for hints on whether the Fed is starting to acknowledge that inflation may not be as transitory as thought. A technical adjustment to address the rapid build-up in excess liquidity is certainly possible, but dollar downside risks remain.

The upcoming Federal Reserve FOMC policy meeting is not likely to result in a change to the Fed funds target rate range of 0-0.25%, nor the $120bn per month of QE purchases split between $80bn of Treasuries and $40bn of agency mortgage backed securities. However, we will be getting updated forecasts, including the Fed’s “dot plot” chart with markets looking to see if there are any signs of cracks in the Fed’s position that elevated inflation readings will be “transitory”. 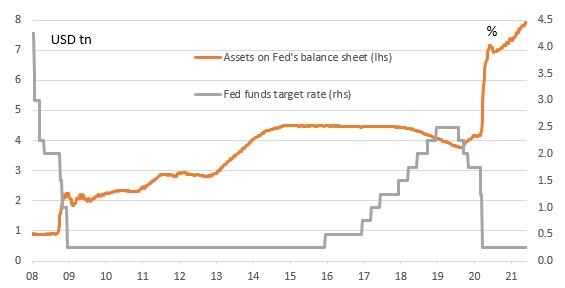 How confident on “transitory” inflation?

With headline inflation at a 13-year high and core inflation at a near 30-year high, we suspect they will be a little more balanced on their assessment surrounding inflation risks. After all, the Fed’s Beige Book noted that corporate pricing power is returning and there is evidence that labour costs are starting to pick up. Inflation expectations are also clearly on the rise, as seen in the University of Michigan consumer sentiment report.

However, their core message that inflation is close to peaking and will soon start dropping back as reopening “frictions” ease is likely to be repeated – we still have doubts on this. We are likely to see a modest upward revision to their inflation forecasts to reflect the recent run of upside surprises. GDP may also see a nudge higher on their near-term forecast.

Instead they are likely to place more emphasis on the disappointing jobs numbers in April and May as a signal that the economy needs ongoing support. With employment levels still more than seven million down on February 2020 they can use this to justify their reasoning that it is too early to discuss QE tapering.

While the economy will have fully recovered all the lost pandemic-related output in this current quarter, it is likely to take another couple of months of strong activity, elevated inflation and rising employment before the Fed agrees that the economy has jumped the hurdle of making “substantial further progress”.

Some Fed officials are tentatively moving in this direction. For example, Philadelphia Fed President Patrick Harker has said “it may be time to at least think about thinking about tapering”.

We think the Federal Reserve’s Jackson Hole conference in late August will fire the starting gun. This will be more formally acknowledged at the September FOMC (the next forecast update from the Fed and remember they have promised to give us lots of pre-warning) with a QE tapering announcement at the December FOMC. 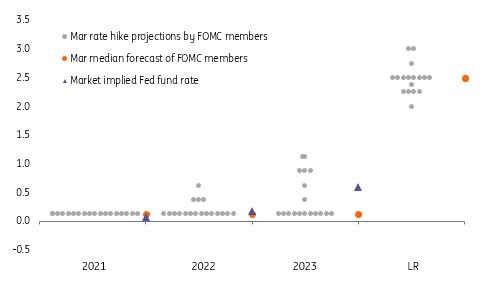 We may see one or two officials bring their forecasts forward on Wednesday, but we don’t expect the medians to change – it would take three people to bring the median of the first hike into 2023 although just two would leave it balanced at 9-9 on whether it is 2023 or later.

We still think the first rate hike will be early 2023 with the risks skewed towards earlier action on the basis that pandemic-related scarring of the supply side capacity of the economy means that it will struggle to keep pace with the strength of demand. In an environment where corporates have pricing power, workers are starting to push for higher wages and housing costs will be more pronounced and persistent, we are nowhere near as confident as the Fed that inflation will merely be transitory.

We are currently forecasting headline inflation remaining above 4% through to at least 1Q22 and core above 3% to at least 2Q22. The longer this lasts the greater the probability it becomes entrenched and poses a threat to the Fed's price stability goal.

A key question from the Federal Reserve meeting revolves around any adjustment that they could choose to make to help ease the dramatic build in liquidity that is returning to them through the reverse repo window. The fact that it is now in excess of half a trillion is not a massive issue in itself, the bigger issue is what it implies about the totality of circumstances on the US money markets, an area that is right in focal point of the Fed’s remit of control.

While the Fed does not pitch rates negative, and the effective fund rate is steady at 6bp, the front of the money market is certainly printing negative, as can be gleaned from bills down in the -5bp to -8bp area. The cash going back to the Fed is coming mostly from non-banks, and typically money market funds that need to post it somewhere. Borrowing bonds from the Fed to post at 0% is the trade to set. Lending cash to borrow bonds is effectively a carry play, but it is a stressed one.

More important for the Fed will be the perception that it has control. If the Fed feels comfortable supplying collateral and taking in cash, then that's fine. But if the Fed feels something must be done, there are a few options. One could be to mop up the liquidity through bills issuance. This is best coming from the Treasury. The problem here is the Treasury wants to reduce bills issuance, partly as it is a policy objective to do so (as it is already quite high). But also as an end-July debt ceiling date looms, and the Treasury has no choice but to prepare for a near miss.

The alternative is to coax up front end rates, so that money market funds have somewhere else to post cash. That would likely point to raising the rate at the reverse repo window (currently 0%) and the rate on excess reserves (currently 10bp). At the moment, the former is more relevant than the latter, but to really coax up rates with success, it would likely require a rise in both. We have long argued that this could be the way to go, and if it is done it should be for 10bp rather than a tame 5bp, as the latter is not likely to solve much.

It would be posted as a technical adjustment, with no implication for wider policy. In its purest sense it of course would be a tightening in policy, but the point would be that it would mean nothing for the fed funds range of zero to 25bp which is the direct policy objective of the Fed. Will the Fed do it? It’s a close call. But there is a risk that they do it and it changes nothing, in the sense that the reverse repo window remains as popular as ever. Bottom line, we don’t have a conviction call here. But if the Fed does anything at all at this meeting, it will be here.

The 16 June FOMC meeting maybe one of the last big event risks before summer trading conditions firmly set in. Markets go into the meeting very much focused on extracting any yield pick-up they can in an environment of declining volatility. Assuming the Fed provides no signals on early tapering or early tightening, expect FX volatility levels to break to new lows for the year and the dollar to continue on its gently offered path.

For example, one-year implied EUR/USD volatility is currently pressing the 6% area – the lows in the post-pandemic era. An FOMC meeting that confirms market suspicions that the Fed would prefer to talk tapering in late August/September would probably see that 6% level give way.

EUR/USD should drive to 1.25 in late summer.

An environment in which US real rates remain very negative and in which eurozone hard data delivers on optimistic survey evidence should combine to drive EUR/USD to 1.25 in late summer. An important new entrant to this story has been the US equity investor. Here, flows into US-listed eurozone equity ETFs have recently picked up. These are now at the strongest levels seen since the eurozone re-rating in 2017 – and should provide key support for the EUR this summer.

Fed patience should also allow another key theme to win through – that of central banks turning hawkish and driving FX gains. In the G10 space, those gains have already been seen in Canada's dollar and Norway's krone. Could the Reserve Bank of Australia swing to a less dovish setting in July? And in the emerging markets space, front-loaded tightening in Russia and Brazil will soon be joined by the likes of Hungary, the Czech Republic and now Chile.

All these currencies should stay supported in this environment. While local policy makers may not appreciate it, what should still be a broadly constructive equity environment could perhaps see some more consistent equity flows into Asia markets too – which could provide some further support to north Asian FX.

Read the original analysis: What to expect at the June Federal Reserve meeting