The gold market is very complicated, but I can offer you some tips on how to navigate through it.

The fall is the season of dying. Thus, it’s probably the best time to give up certain activities, prepare for winter (it’s coming!) and later re-birth. Hence, this is the last Gold Market Overview that I’m writing. Perhaps I’m not leaving the gold market completely, but I won’t be writing about it in this format. I am sharing here with you what I’ve learned in nearly a decade of writing about the yellow metal.

The gold market is complicated. Gold can’t be valued like stocks or bonds because it doesn’t pay dividends or interest. It’s also neither a standard currency nor a normal commodity. Thus, simple models that focus on annual mining production or jewelry demand don’t work. Macroeconomic factors play an important role, but emotions and narratives are also important. The well-established correlations can suddenly break down, at least for a while. Hence, if someone claims that the gold market is simple and that he or she has created an elegant model for determining the price of gold, don’t trust such a person.

The key fundamental factors in the gold market are real interest rates. As one can see below, these two variables appear on the chart as their mirror images. When real rates go down, gold rallies, and vice versa. However, this negative correlation changes its strength (for example, gold should plunge much more right now, given the surge in real rates), and sometimes causes even breakdowns (as it the case in 2005-2006). 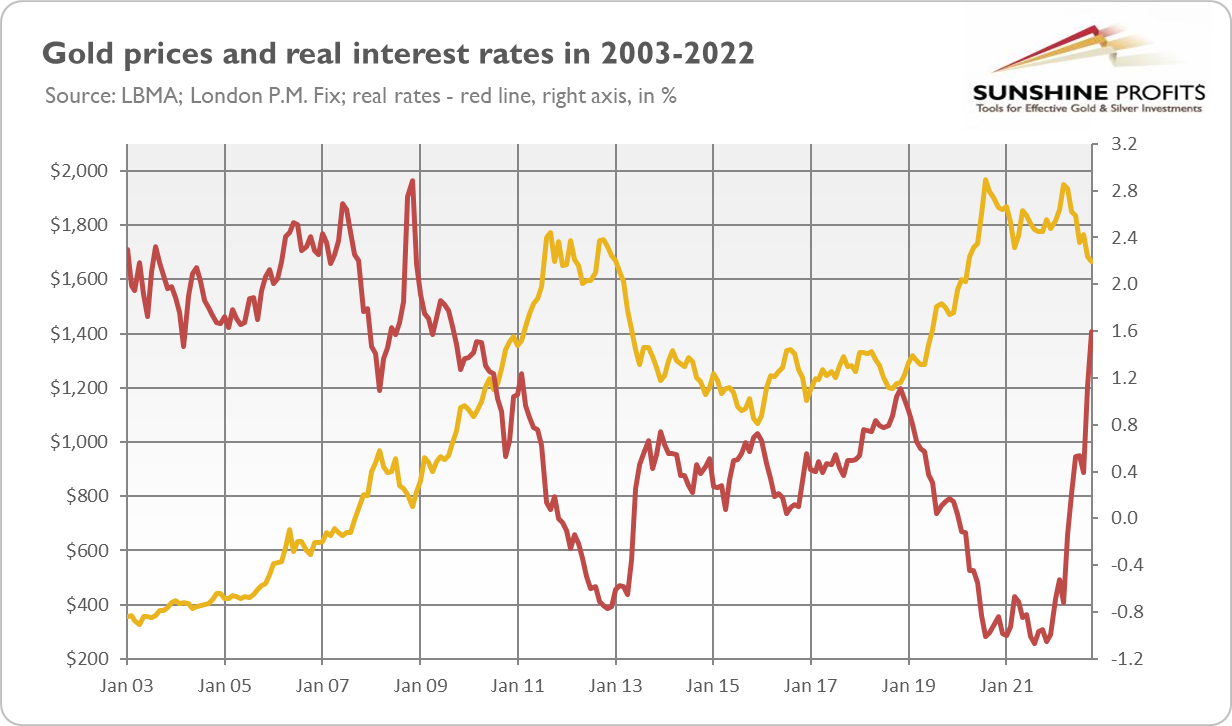 Another significant driver of gold prices is the US dollar, whose strength is also negatively correlated with the price of the yellow metal, as the chart below shows. However, this relationship has a more fickle nature, as sometimes these two assets move in tandem. 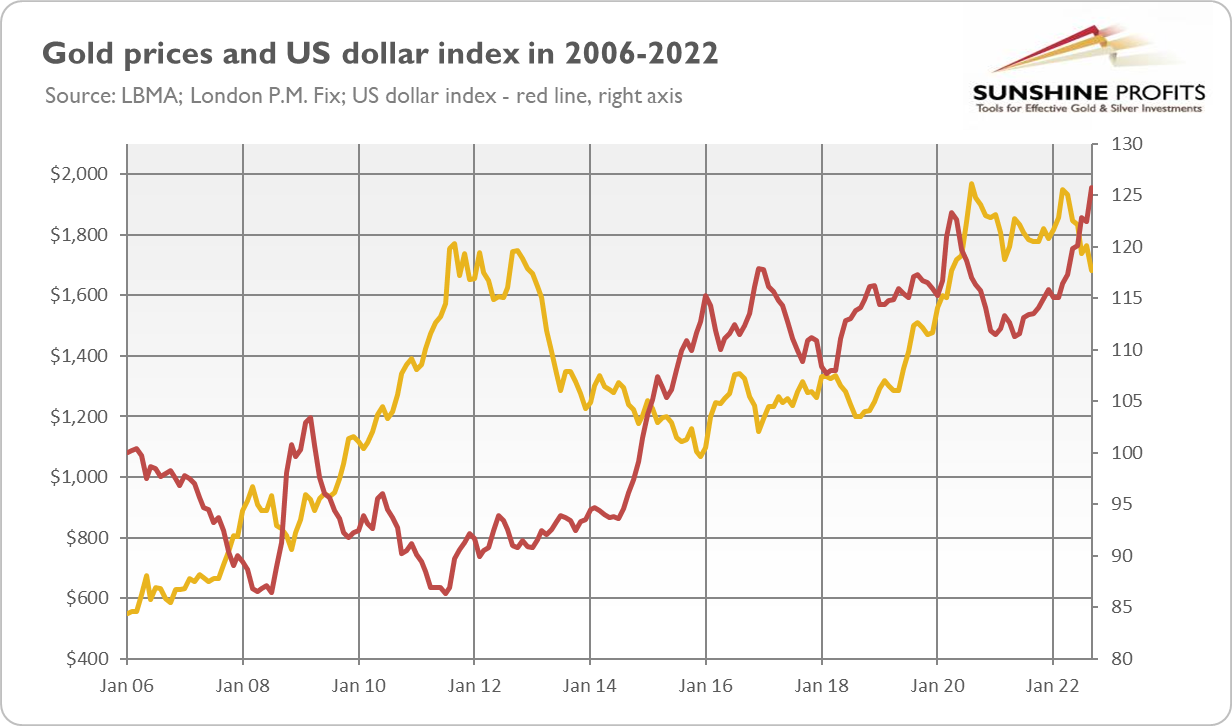 In the long run, gold prices tend to go up. Since 1971, the price of the yellow metal has surged by about 4300%, or 17.5% annually (geometric rate or return). In real terms, gold gained “only” slightly above 490% in the past half century, or 13% annually (geometric rate of return). Given the constant loss of the dollar’s purchasing power and the inherent instability of the monetary system based on fiat money, gold should be worth more in the next several dozen years. 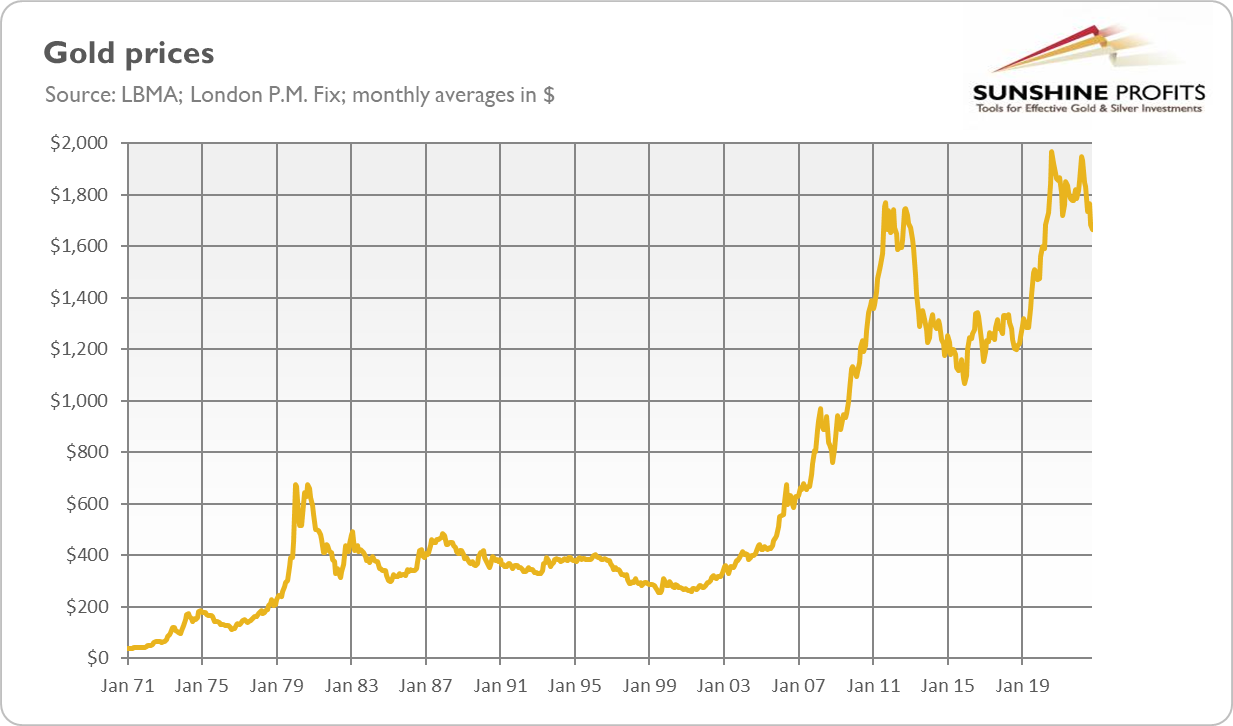 However, please note that gold is not a perfect inflation hedge. Not only did gold enter a long-term bear market in the 1980s and 1990s, when inflation rates were still positive (although declining), but it has also struggled in 2021-2022, when inflation has accelerated to about 9%.

More generally speaking, don’t play other people’s games. What I mean here is that you should distinguish between long-term investing and short-term speculation. If you trade gold on a short-term basis, the fact that it tends to go up over longer horizons is of no help to you. As Lord Keynes famously said, “the market can remain irrational longer than you can remain solvent.” Similarly, if your strategy is to buy and hold, don’t worry about the daily hustle and bustle in the marketplace.

Don’t be attached to your opinions. The greatest mistakes occur when investors believe that they are right and markets are wrong, or when they believe that gold should be rising or declining, even though the opposite has been happening for a long time. Gold is not obliged to do what you think it should do, it does what it does, it moves the way it moves. You can either accept it or take offense at the markets. The idea that markets are wrong can help you keep your self-esteem high and not admit your mistake, but it won’t help you make money.

Remember that gold evokes strong emotions and that many analysts and market participants have strong opinions about it (sometimes ideologically biased), which are not always correct. Gold is neither a barbarous relic nor an asset whose price should always go up (and if it’s not happening, it must prove a manipulation). Pessimistic opinions are more widespread in the financial markets, as we’re evolutionary adapted to absorb bad news, but they’re especially loud in the gold market because fear mongers can sell more gold that way.

Most of the gold market analyses are simply bullshit, especially the press coverage. The journalists are tempted to “explain” all moves in the gold market by some cause, even if they remain within the normal range of market fluctuations. For example, they can write that the price of gold declined one day meaningfully from $1,865 to $1,850 because of the hawkish Fed’s decision. But this is nonsense, as such a drop is just a 0.8% slide, while gold’s daily standard deviation is more than 1.1%. It means that the decrease was perfectly normal, given gold’s volatility, and could occur even without any meaningful market events.

Investing in gold is more of a pricing game than a value game. This is because gold has no ‘intrinsic value’. It implies that market sentiment is crucial in the gold market. I’m not saying that gold just moves erratically, driven by animal spirits, or that fundamental factors don’t matter, but rather that they affect the gold price via investor perceptions and moods.

That’s not all the important points about the gold market, but I’ve run out of space here. I hope that I’ll be able to share more insights on another occasion, somewhere in this beautiful universe.